So to see a few sights today here in Berkhampstead.  A brief walk through the high st the first evening showed a few nice dress shops.... David was fine with this as he had spotted
WH Smiths and wanted to get a couple of maps,  (you know Reader how he loves a good map).  We decided to go first to the castle here.
Its a Motte and Bailey castle,   HERE   thought to have been built by William the Conquerer's half brother and at a gap in the Chiltern Hills.  Its had a colourful history, being put under siege and much later having been expanded by
Thomas Becket, you know the one who aggravated Henry 2nd so much "Who will rid me of this turbulent priest...." a simple misunderstanding.  But the piece of history both Lesley David and I were interested in was Edmund of Langley    HERE
He was the brother of John of Gaunt who in turn was the  lover of Katherine Swinford who you will doubtless remember we have followed in her footsteps all the way on this trip from Kettlethorpe in Lincolnshire, Lincoln castle and the house she lived in Lincoln itself to her final resting place in the cathedral.
Some woman she was and some book that we have all now read   HERE.

The castle ruins are very large indeed, in fact we walked the ramparts and it took about half an hour 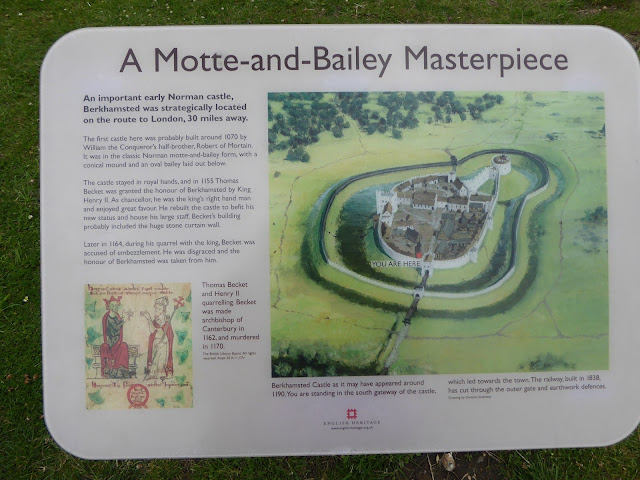 Most interesting castle, I only wish there was a bit more of it. Still on we go and look at dress shops eh David?

Actually we didn't get that far as in Berkhampstead every Wednesday there is a pretty marvellous market.  I brought myself some most attractive beads, whilst David trotted on and did a recce, he found a lovely French lady selling Olives, sundried tomatoes, cheeses and his absolute favourite chargrilled artichokes ( I have tried these previously and had to spit it out, I haven't had to do that since childhood)  David is thrilled no one else likes them.

Well we are going home in a few days time and really shouldn't be buying any more food but guess what........?
Yep we loaded up, two loaves of artisan bread, hams a collection of cheeses and a tonne of olives. Madness, but Reader if you are on the southern GU its worth the journey on a Wednesday, Ooooo forgot to say pretty wonderful Italian shop selling Italian ice cream, they don't serve as big a portion as you get in Italy, but it was good.

Gerry yesterday of the Atlantic fame had told us that the fish and chips at the railway station are the best in the country, this was high praise for a real foodie, so we did.  I would certainly say they are too.

We ate ours out of the paper in the park.