We arrived home today after a short flit back up to Enslow Mill Wharf to leave WaL safely.   We are home for a month now but that isn't completely true as we are going to France, boating, boating in a giant sized "Yoghurt Pot"

I can hardly bring myself to admit it after all the micky taking I have been party to about Yog Pots.... But we all be together in one giant plastic boat, most likely in the rain.  I will endeavour to write up some of it for you on my return.

So we are off at the very end of June and joining with our very own "Boat Sharers" plus two experienced bloggers    HERE    but oh what am I saying  Sarah now has moved onto to a new blog   HERE   and Lesley's blog  HERE   in fact on that first page of Yarwood's blog (NB Yarwood has since been sold)  you will see Sarah and Andy who came across The Wash with us all, have organised this trip!
I do hope we all come back on speaking terms.

So back to this morning, we crept out of Thrupp after 8am, David had chatted to a passing chap yesterday and as we moved off this chap was ready to take our spot, such is the demand of moorings at Thrupp. 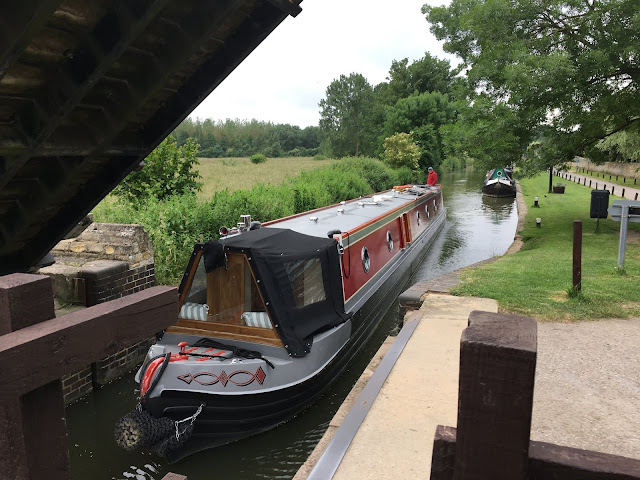 David had followed Steve's example with his brand new boat all gleaming and unsullied book and wiped down the polished paintwork of WaL and washed the gunnels clean of the mud that gathers and then this morning with a small amount of irritation we saw that the white cloud up ahead wasn't smoke from a bonfire but dust from the very nearby gravel pit blowing over in the high winds. 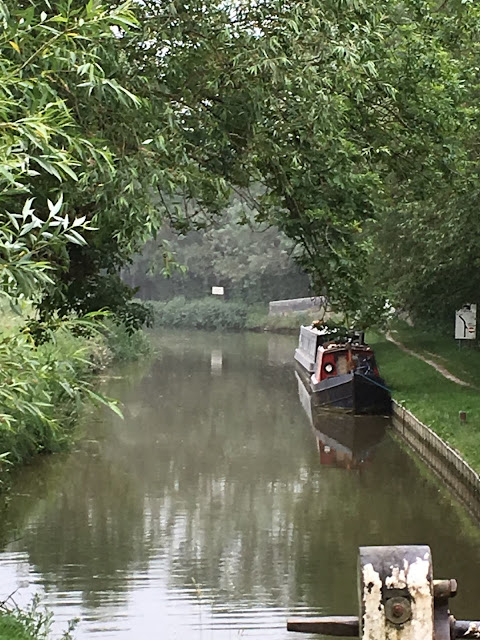 Annoyingly we had a light covering all over but these two moored boats were really covered in the stuff, as were the other moored at Enslow.

There's been quite a bit of nothing going on here.
Thrupp is very lovely but even more so is the countryside surrounding Thrupp.  We went for a walk on bikes.  Its a odd thing that whenever you have a bike with you the stiles are numerous and awkward, but when you solely walk, they aren't any.

Eventually are David being the muscleman and heaving the bikes over, we arrived at Hampton Gay    HERE    Its a wee hamlet today made up of not much more than a bunch of cottages around a former Manor House, but in 1874 there was a very serious train crash hereabouts on the London line and Hampton Gay was in all the papers.
Its strange to get to a village over three fields, but I suppose thats how it used to be for us country folk....

Eventually we ended up cycling on a road and the cycle route at Kidlington took us through this field being baled for hay.  Now I know its hard to see but believe me when I say there were SEVEN Red Kites flying and aswooping, although they are graceful and smooth flyers, they are also extremely hard to get a shot of.

Home again and straight to Annie's Tea Rooms, the place we love to be...

But this is solely for David Lewis, a man who loves a bit of sawdust. 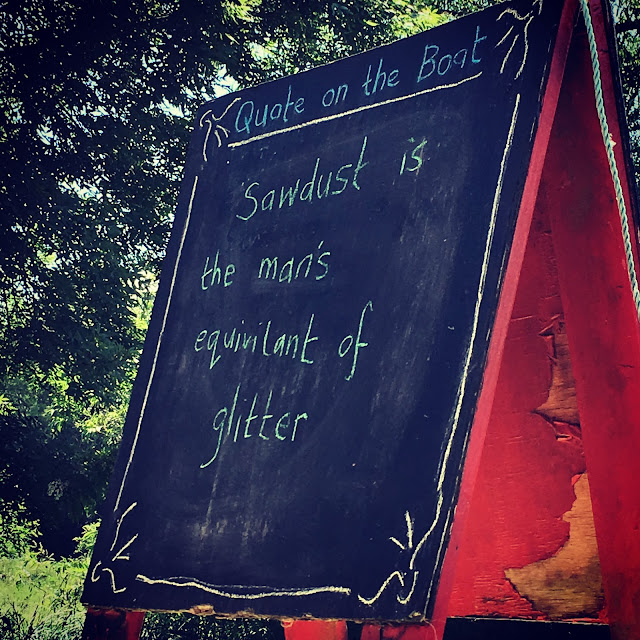 Supper was salmon on a bed of puy lentils, sundried tomatoes and black olives.
Posted by Lisa at 19:52 3 comments:

So whatever is a Praeneste? Plus marijuana.

It was with great sadness that I announce today Steve & Denise left us, they've moved onto The Thames and it would seem enjoying themselves too, while David and I are humourless and lonely.

So what should we do today?  Luckily David had spotted a nice house on his early morning rounds and we went there.

The blurb said its a very non commercialised house, meaning no shop and no café!!  So on what became a sweltering hot day, we arrived at Rousham House.  Actually its a stones throw from Lower Heyford where we stopped over one night, but today we went in the car.

We parked the car with about eight other cars, following the sign for garden tickets there was a machine similar to a car park paying machine, as we were reading it a lady very similar to Audrey Forbes-Hamiliton came bustling over to help us.  This lady was in fact the owner. 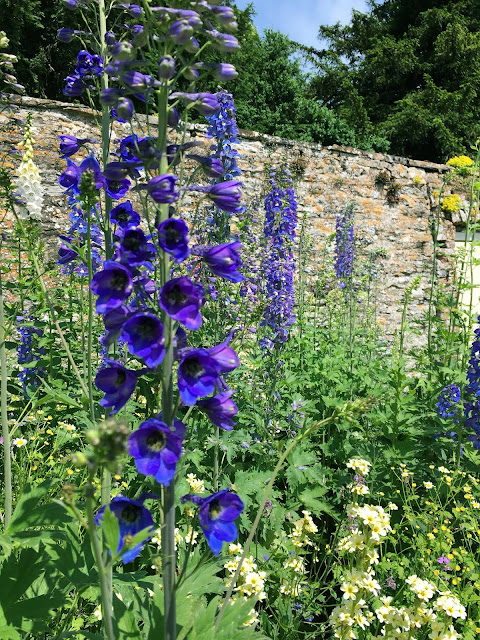 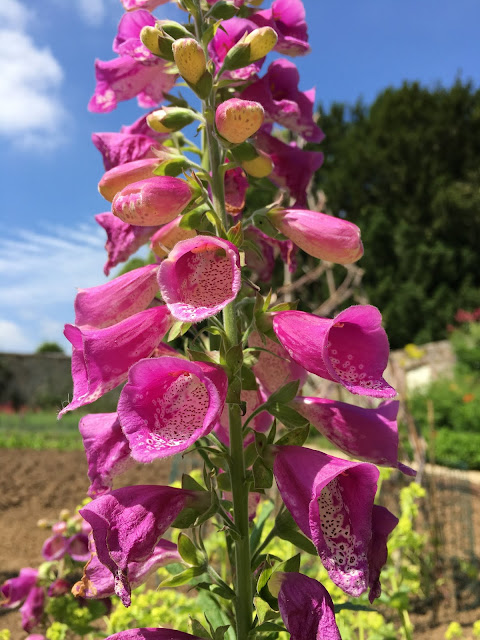 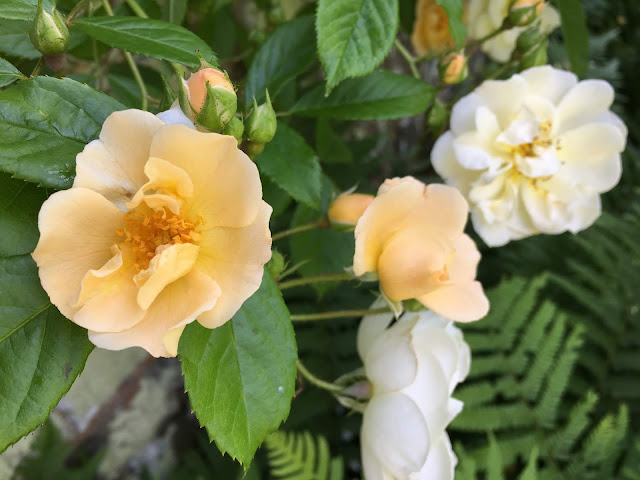 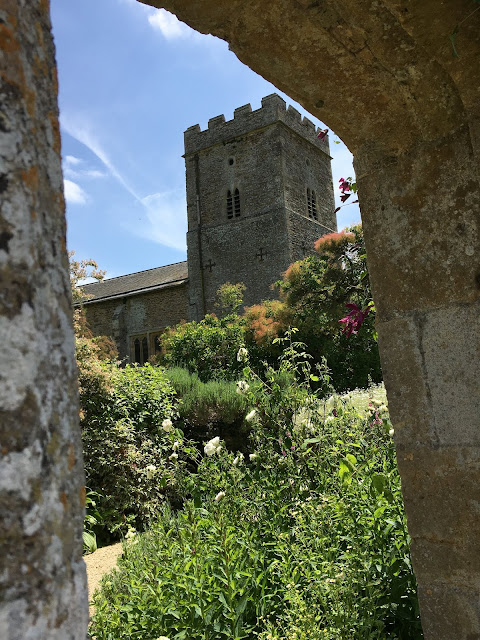 The House and grounds are really wonderful, going down to the river where we watched Muntjack deer scampering and countless royal blue dragonflies.  Come visit here, its rather nice as there are no Keep Off The Grass signs of the kind the NT employ to annoy me.

We returned to Thrupp and had afternoon tea at Annie's Tearooms and much later had chicken in a mango and coconut sauce sitting in the sun.
Posted by Lisa at 12:13 2 comments:

I had meant to have included these yesterday.  As we sat surveying what I have come to regard as our meadows, I noticed an odd looking rig-up with metal looking something like a height restriction to an entrance to a car park, I couldn't make it out so got my camera out and zoomed in, then it started to move. 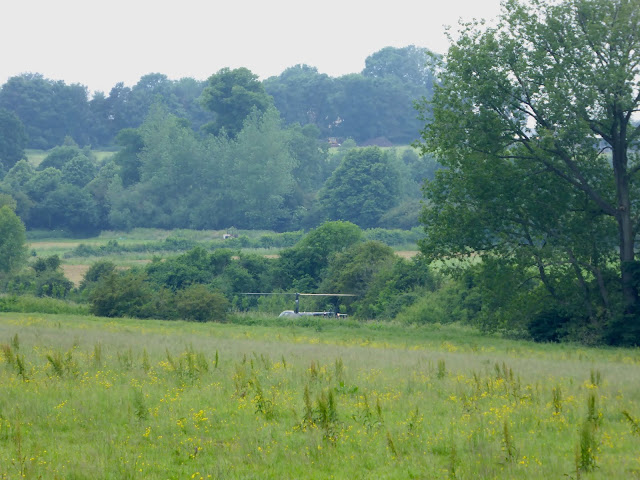 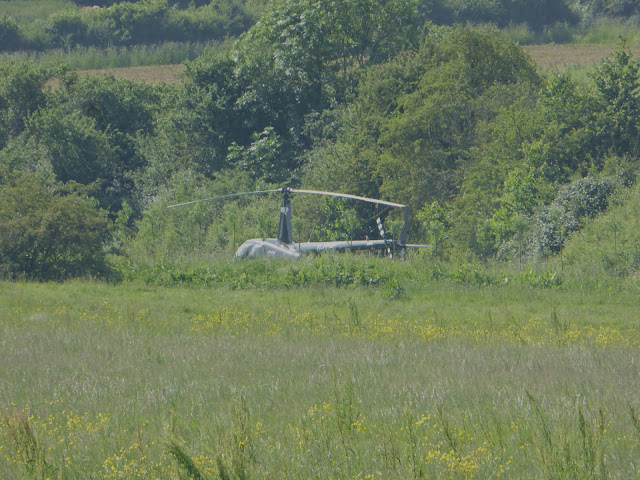 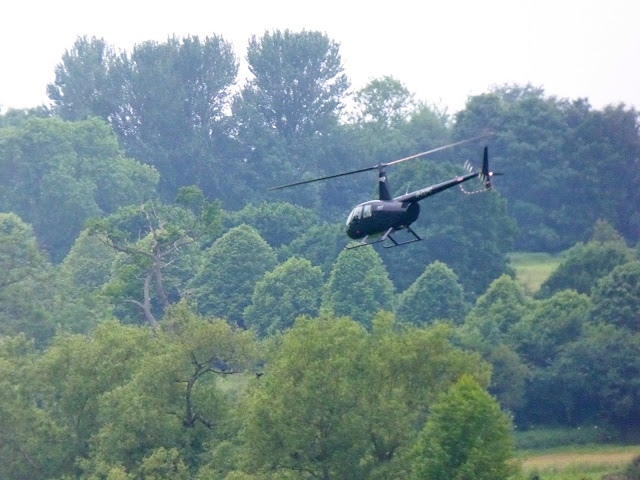 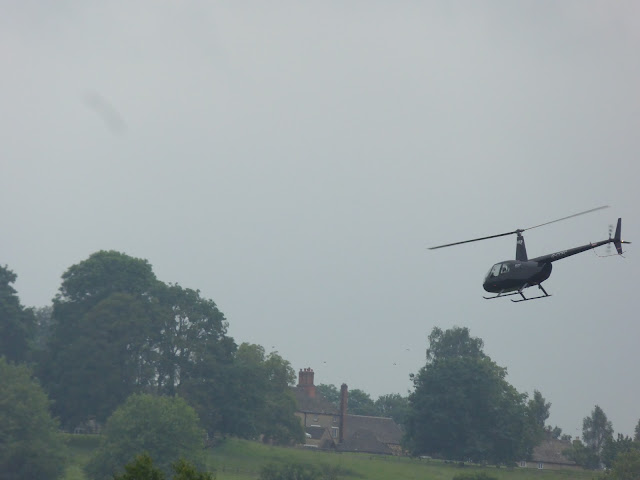 Then it took off, it doesn't look like it but this is the bottom of someone's garden.  Two passing dog walkers muttered something about "Him going to Oxford".....  but actually the Oxford Airport is only 17 minutes from his house according to Googlemaps so I expect even this millionaire was going further.


The next morning we were up and ready to lend a hand to good chums Steve and Denise to get through Somerton Deep Lock, Denise would have struggled alone.  So we frogmarched through the undergrowth that is the tow path around here, windlass in David's hand, and arrived well in time to prep the lock for them.


Now the beady-eyed Reader among you will recognise this boat, it's literally on its way from Crick where it was exhibition to The Thames, NB Riverside is brand spanking new and it's a bit of a WOW BOAT!!   We were so pleased to see their new boat and them of course after a good couple of years and to have them pop up right next to you almost is such a treat.

We went down onto the meadows, drank coffee and chewed the fat then  about two hours later moved on down to Kirtlington and Pigeon Lock where both boats got on the back of the busy moorings and had supper together up in the village at The Oxford Arms, our second visit this summer.

Supper for me was potted shrimps, Seabass  think it was and chocolate and hazelnut torte, yes and as someone asked me recently how can I eat three courses well I can and fairly easily too.

The next morning we were all up, thanks to David, and set off at about eight O'Clock to get a mooring where we really wanted to be.


So here we both landed at Thrupp.  A real "Honeypot" mooring hence we landed here at about 09:45, a nice lady opened the lift bridge for us as her boat was on the water point, their boat, another 70' had just vacated so we slipped in their spot as did another five or so boats during the next hour.  Full up by about 11am.

Steve was a bit of a SuperHero and bled our bathroom radiator, then refilled the water into the system.  I paid careful attention and so did David, but he can't be trusted alone as Steve showed him several years ago.....
Result!


Supper was cold salmon with couscous and lightly pickled coleslaw with coriander.

Lazy day today.  We certainly lazed over breakfast just enjoying the sun on my feet and the view over the river Cherwell valley.

Finally we made a move, we only had to go half a mile to Aynho for a pump out, turn and return towards Somerton meadows for today.

So we got to Aynho and were saddened, dismayed and finally horrified when we were told there is no pump out service here.  Now I am not aware of a wharf/marina who sell diesel, have a wee shop that don't have a pump out service, I kind of think they should.  But we'll fight that another day when we have an empty tank again.  But till then I shall mutter about them.

So at least we had a lovely day to ponder our predicament as we set off again past all the moored boats south of  Aynho and down into open countryside again.
All of a sudden Maffi came into view, he had a "Boat Guest" today of the very nicest kind and was going on a Boaty Jaunt. I told him laughing nervously of our plight and he said "Oh Bugger"  then suggested Thrupp.
So we had a fallback.

Then I had a text from good friends Steve and Denise on NB Riverside, saying I know from the blog you are at home but we are making our way down the South Oxford and are today at Aynho!!!!!!!  I phoned her straight back, unbelievably we had missed them by about ten minutes we guessed.  They had moored above Aynho and were walking down to the Western Arms to make a booking for that evening.

We haven't seen them in a while and made arrangements to meet up with them the following day.

This item of Farming News is reported from Somerton Deep Lock, David always likes a bit of other farm snooping

We moored on the meadows, no cows of any sort today.  Not long afterwards, we showered and got ready to go out to supper.  So tonight was the night of us joining other diners at a Pop-Up Supper Club here in Somerton.  We had stumbled across this by way of a happy Google accident three weeks ago and were really looking forward to it.
It was now about 7:45pm, we were a little too early to arrive at 8pm.  For those of you wondering I was wearing a gold sequinned top and gold sandals.

So we stopped in a gateway with a view right over past Somerton lock and saw to David's horror the bales were still out uncollected from the field, David would have worked certainly to 11pm at this time of year.... The younger generation eh?

Jules cooks in her own kitchen to ten guests and we are all in the woods close by to her house.  There were cushions, cosy rugs, amazing food and good company.  It was great fun and I'll be certainly looking for more Pop-Ups nearer to home. 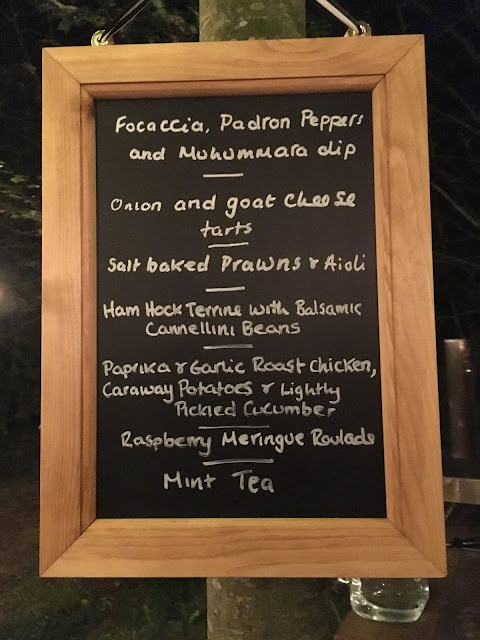