The Last Leg, for now.

Going through Gailey this morning, as we did just over two weeks ago, I gift you with another photo of the event as I believe it is the law for all Boaters to take one going through here.  For pure joy I changed the perspective for you.

You may have twigged Reader that with the shockingly slow pace of posts, that we have indeed returned home now.  This will be blatantly obvious when you just look at the sky.

The morning in question, in the photo was freezing, we were both wearing winter fleeces and I sit at home in temperatures close to 30 degrees today, it's hard to remember that chilly morning.  I walked the first three or four locks to warm up.


As I walked down I found these Pretties in bloom although the first which I assume is a plain bramble has just gone off its best. 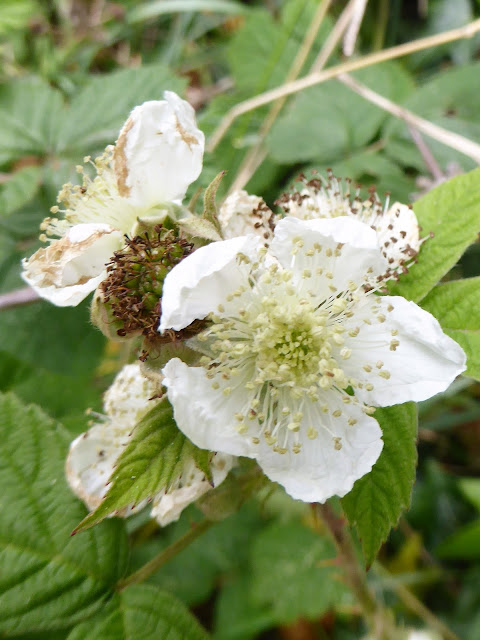 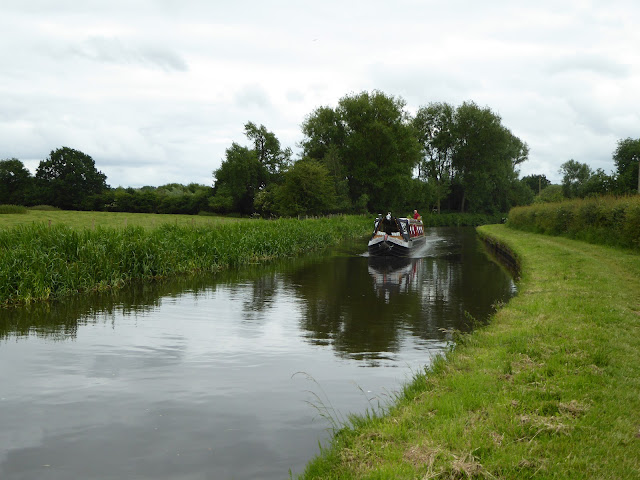 As we got to the next lock after this photo above there was an elderly man there already with a dog who kindly shut the gate and we chatted for a short time.  Turns out he had driven here from Walsall, (About 30 mins in the car) he helps boaters here regularly with his rather old dog who mooches around.  I told him that we had actually just been visiting Walsall and that I bet he hadn't meet many boats who have.  He told me that he has lived in his house since 1940 when he was 4 years old.  I'll help you Reader with the maths as David did it for me.  He is 81 and has lived in the same house for 71 years.  Now how many folks today can say the same thing?

This is Teddesley Park Bridge, built in 1825 I think I found somewhere.
Teddesley Hall     HERE      was a large estate and in later years another great estate was inherited making a huge estate.  Interestingly the then owner Third Baron I think sold off much of the estate to his tenant farmers in 1919.  For that time this was rather unusual,  I couldn't find out why although I followed lots of links and threads.

Anyway the Hall is long gone.  I do hate not knowing answers 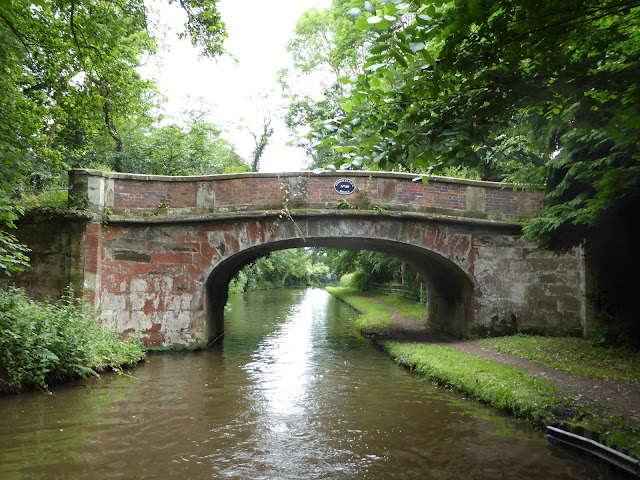 Debby if you are reading please feel free to name these rather lovely Pretties; 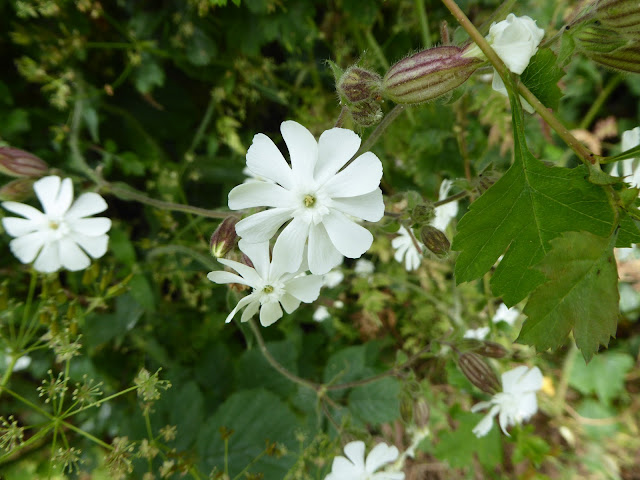 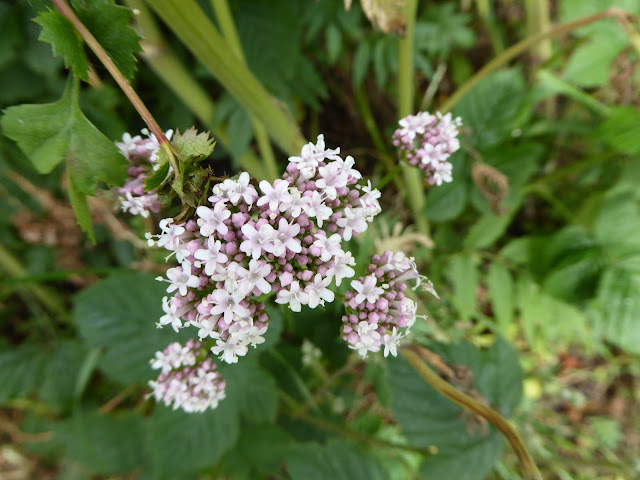 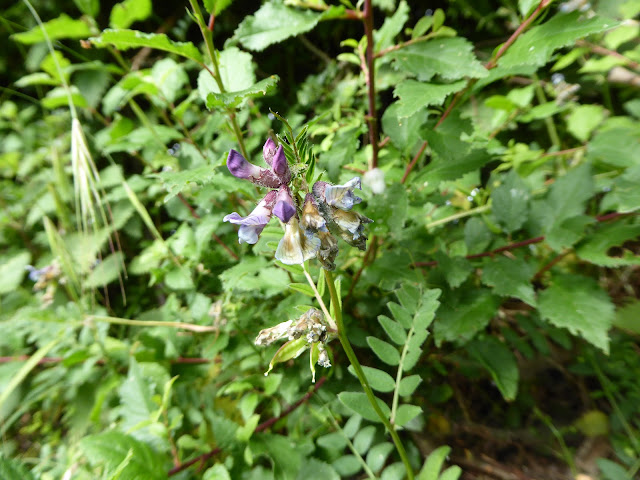 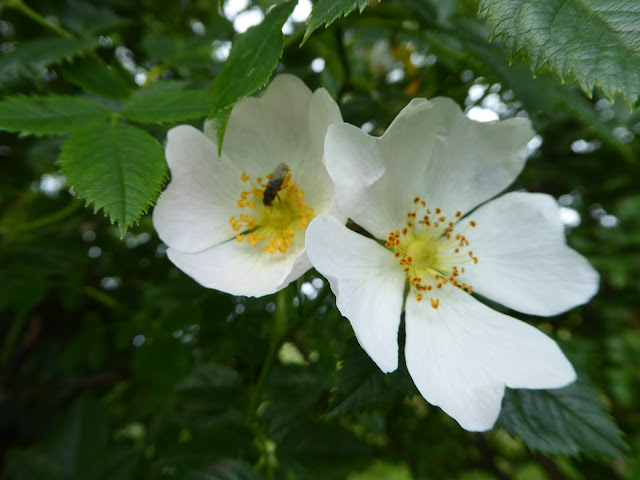 We spent the night at Acton Trussel and in the morning made the short flit to Great Hayward Marina where we have left WaL for the best part of another three weeks, home for commitments including Wimbledon, Lords and a wedding.

So it was an early start today to get the flight done, I don't know exactly how early as it was almost night time for me.   Bentley Bridge is about an hour away from Horsley Fields Junction that is to say where the Wyrley and Essington canal meets the Old Main Line of the BCN, the flight is just a smidge on from there.  Today's post is a bit of a photo diary. 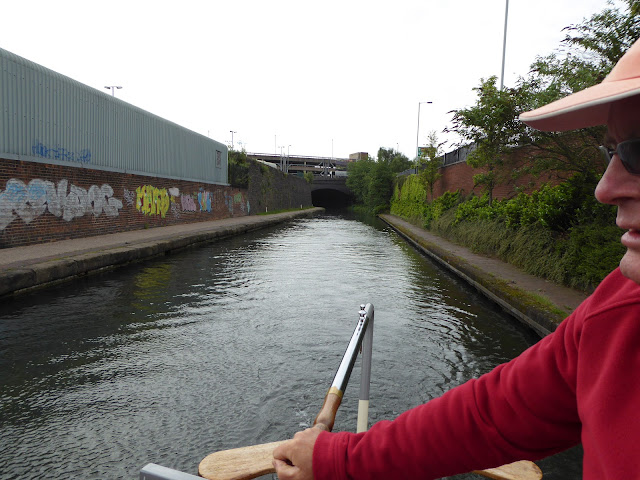 We struck absolute gold this morning.  We got to the top lock at a little before 8am to find this lovely lockie, who had arrived a little earlier and found one pound, either the second or third one down drained and another near to the bottom drained.  He was going to walk ahead of us and fill the locks to flush water all down
Result!!!!!!

And that's what happened, with each lock we completed, there was the next lock filled with the top gate open.
A free flight I thought.  He had walked down to lock 10 and walked back towards us, then later driven down in his truck to the bottom and walked up.  All in all and nearer to the bottom we met three boats in total coming up so it was the easiest flight ever.
Marvellous. 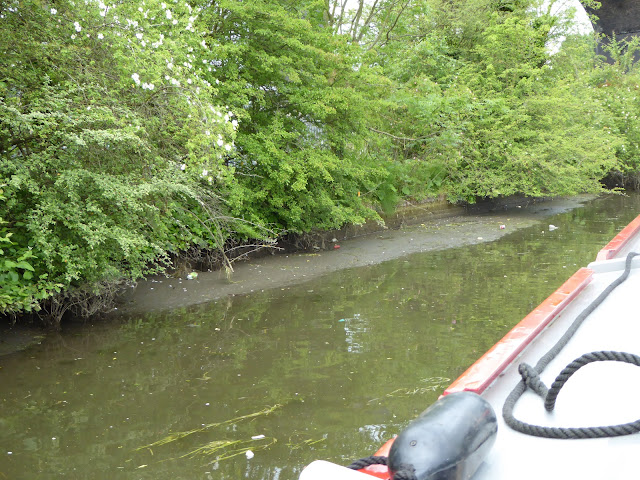 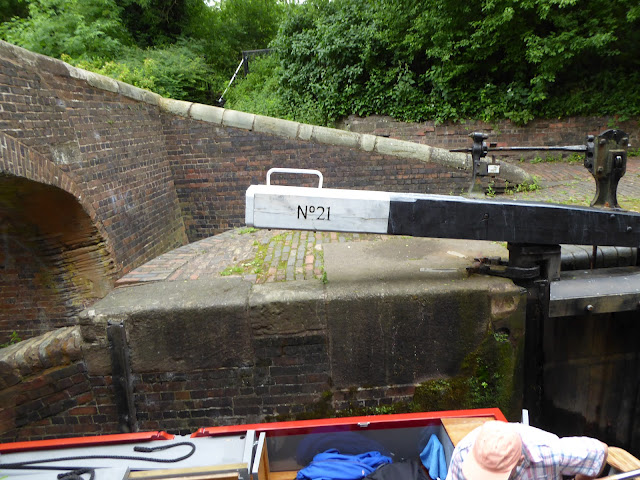 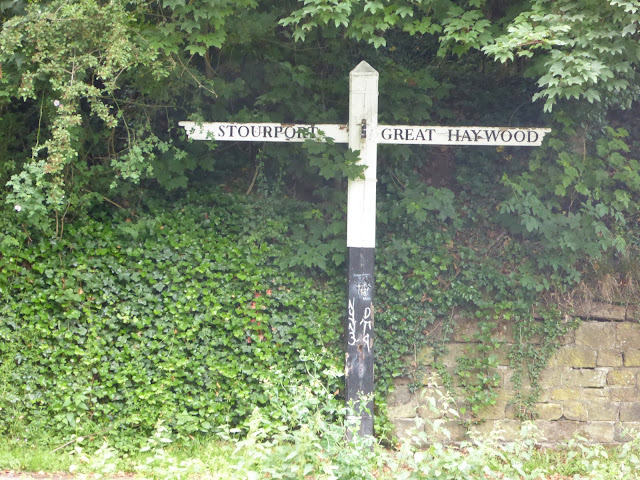 We were headed for Covern, from there David was going to fetch the car.  Then later this afternoon we went on an expedition to Wolverhampton's Waitrose.  A favourite haunt of ours at this time of year, that is to say when they do their promotion of 25% off all wines....
Gin was on offer too!

Supper was a whizz in the car to Penkridge to The Littleton Arms   HERE    another must go to place, actually this was a reward for all my slogging down the flight this morning  ahem

Supper was for both of us, boringly we must be married, scallops, the chick pea, sweet potato and coconut curry that we both though exceedingly mild.  Maybe the trainee forgot to add the curry powder, but it was very tasty all the same followed by homemade cherry bakewell which was lovely.
Eating nothing tomorrow.

It's a WHAT coming?

We left Persall Common this morning and a pretty nice day at last.  The sun almost came out but it was warm and Lisa was very happy.

The countryside was unexpectedly green and lush, all in all quite lovely.  The greenness continued until it stopped as we came into a built up area. 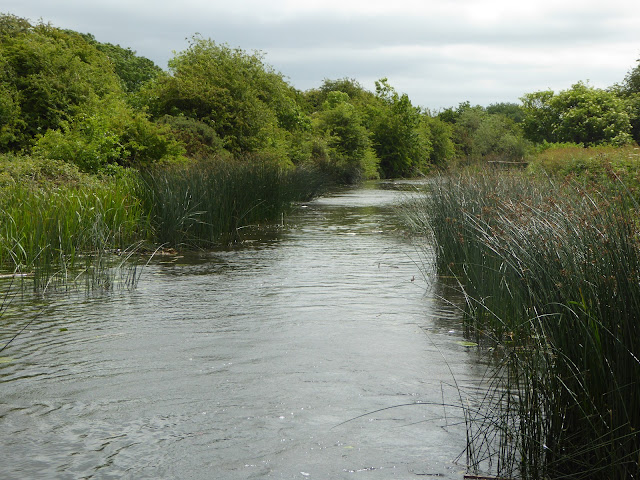 Water lilies beginning to flower, I've been waiting for them. 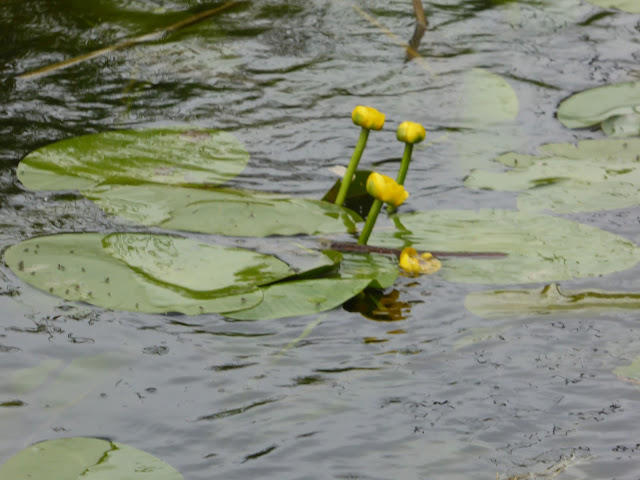 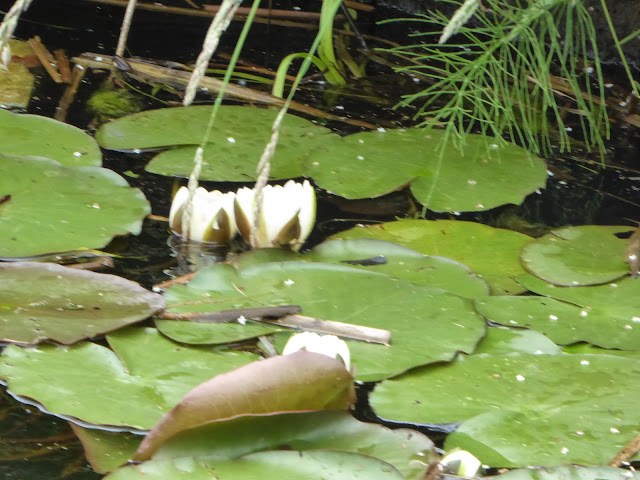 So although the rubbish in the canal has a reputation, today was only the second time the prop got mangled.  David tried the usual technique of reversing at speed which had the inadvertent effect of making it much worse, as the banks were all full of reeds and lilies, at the approaching bridge I suggested me getting off and holding the middle rope while Sunny Jim went down the 'ole.  All fine then as he was getting towards the end of the plastic hauling, I called to him, you are not going to believe this but there's a boat coming!
There was shock on both of us I can tell you, first boat manned and moving in days and days....
Well it didn't take him long to jump up, clean up and get out of the way, the Sea Otter owner was patient and understanding....  We apologised for blocking the way but said we hadn't seen a boat in days, he was laughing by now as around the corner came another Sea Otter and he told us that The BCN Explorer Cruise had started yesterday and that 19 boats were coming this way!!  Yikes

So this part of the canal is long, narrow in places, green and alternately built up and industrial which makes it interesting to me.  Cyclists went past exclaiming surprise and delight of a boat on the canal (Today of course there were 20 in total) he said he hadn't seen a boat before, we told him we were intrepid travellers from the south. 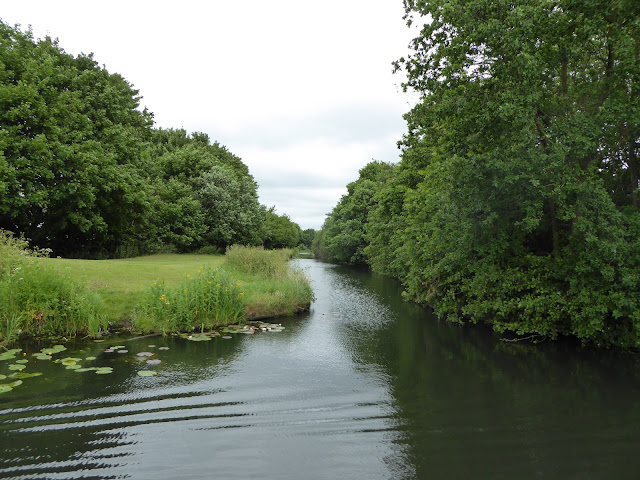 So to our next mooring was at Bentley Bridge. Today its a retail park full of eateries and I think I remember seeing a big supermarket.  But we didn't need anything and it was quite late in the afternoon for us, so a nice steak supper.
An early night as tomorrow we are heading down the Wolverhampton 21 Flight.

So us like a lot of people had a bit of a lie in, this was the morning after the General Election and the mass confusion that went along with it.
David woke early after only three hours of sleep, I had done slightly better.

Later on we set off.  The Anglesea Arm is a branch off of the Essington to Wyrley canal and goes off seemingly into the green countryside, its not a long run up but it was attractive.
Presently we came to this interesting old junction, to Huddlesford, which we had passed by the other end of this branch, it was where the Gardner Engine Festival was being held.  This sign post mentions 'Restoration'   HERE  you can see their website, I think I shall make a donation. 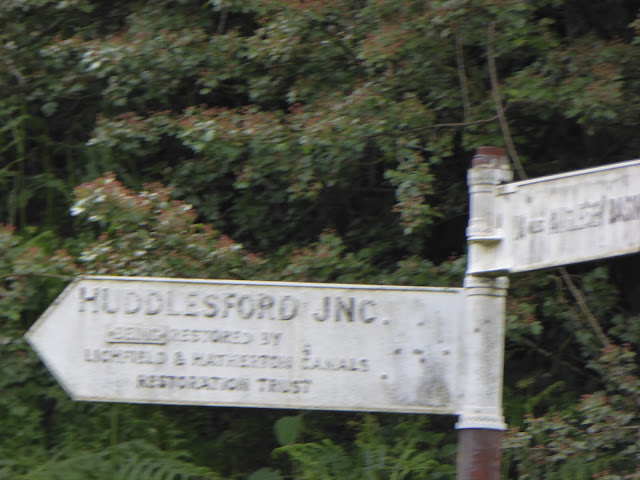 On entering the basin here, was this odd structure, if anyone knows what it is please do tell me.

This is the lovely basin below, formally for the loading of coal into barges from the mines nearby to the reservoir which is behind the slope in the photo. 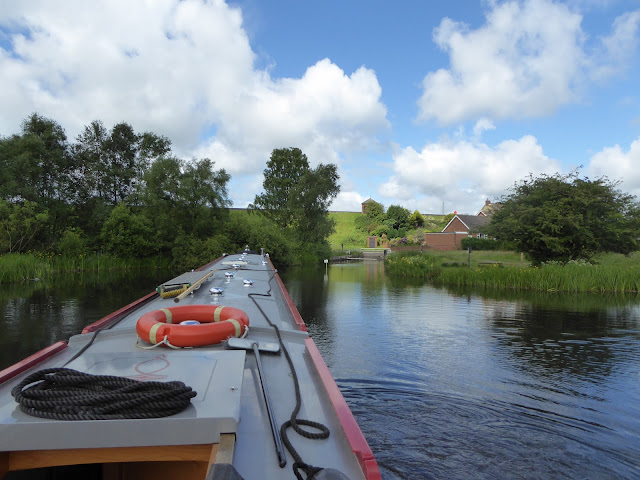 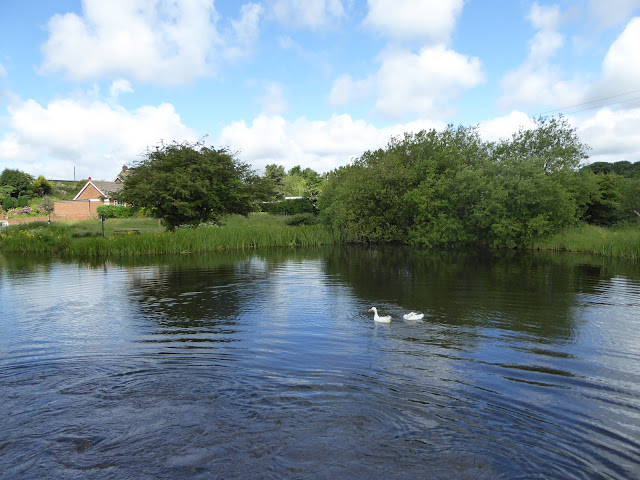 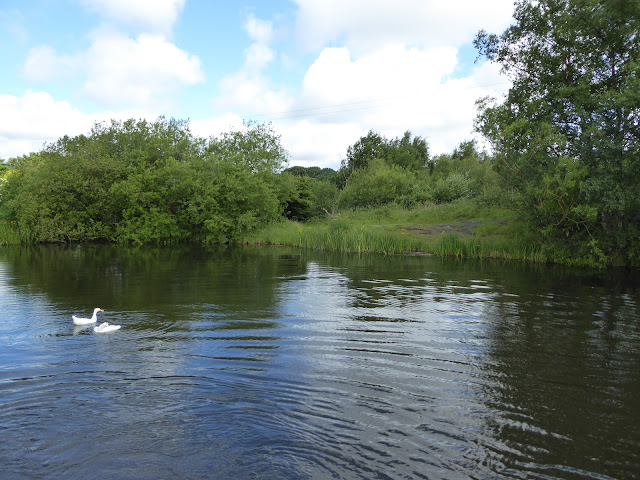 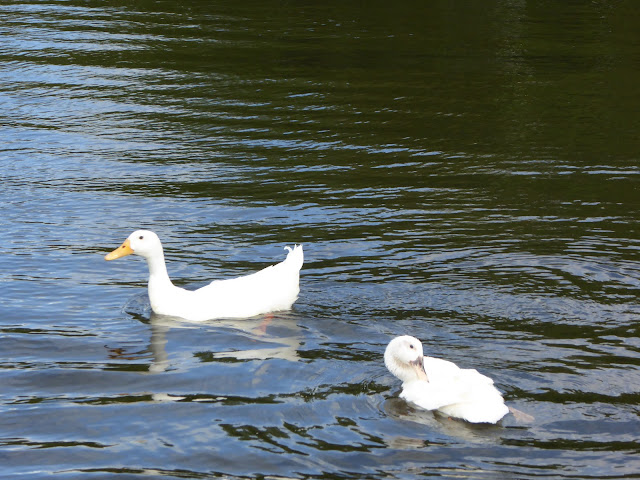 We went for a ride around the lake as I like to call it. 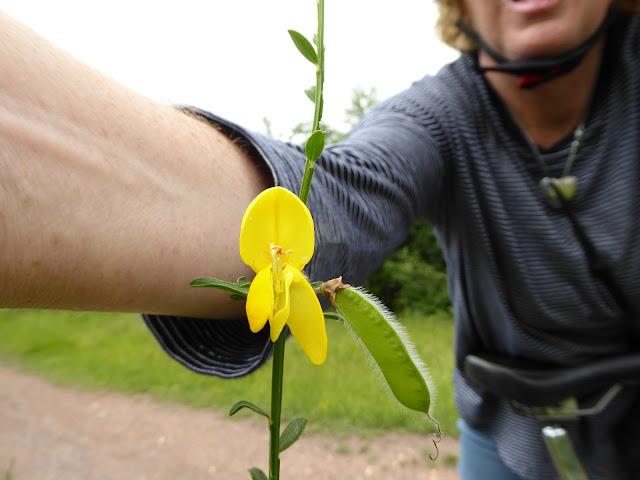 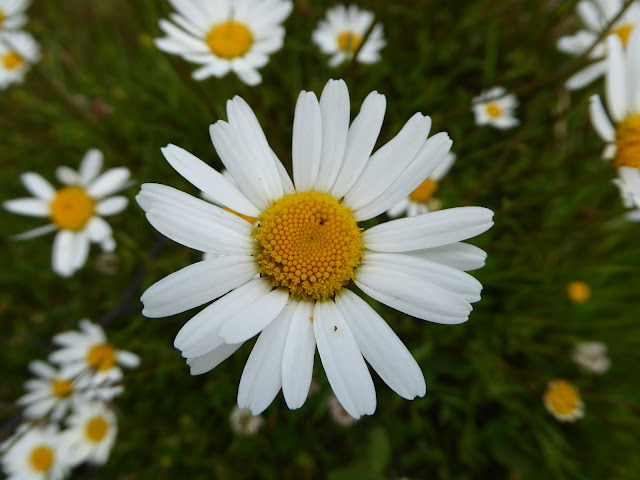 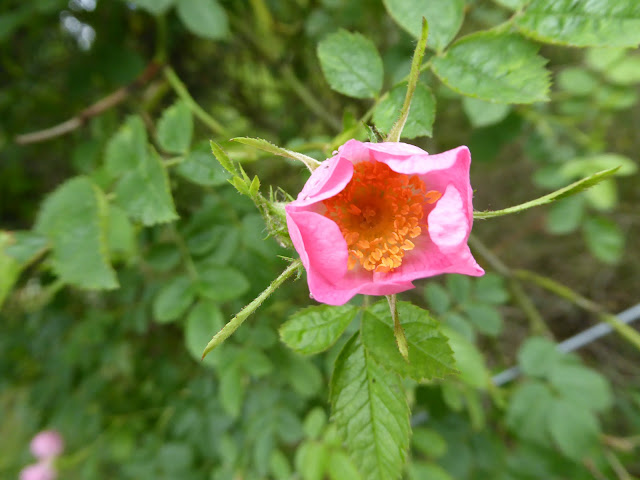 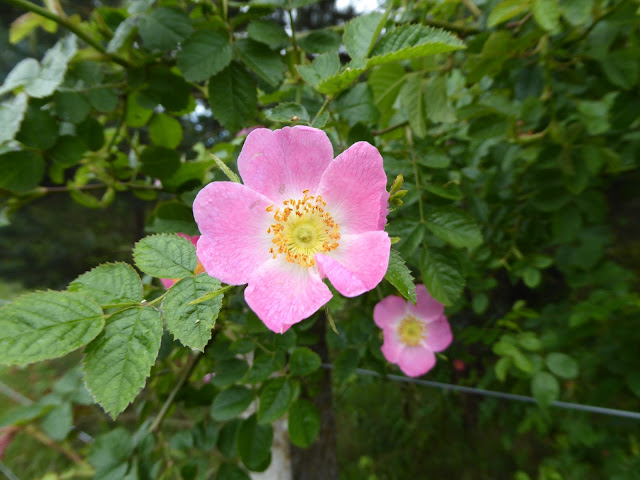 Suddenly there was this deer, standing calm as you like. 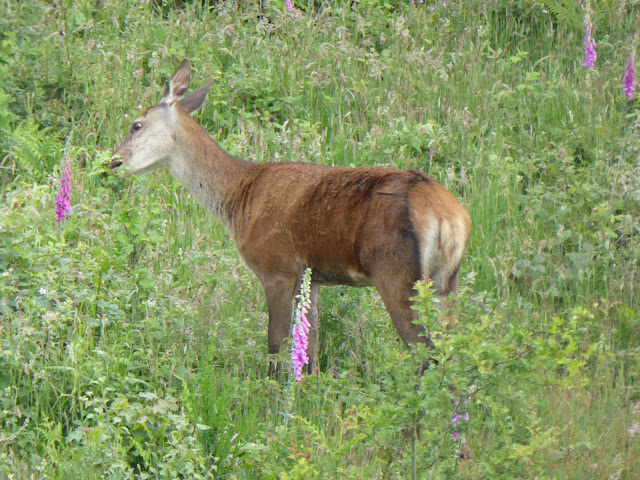 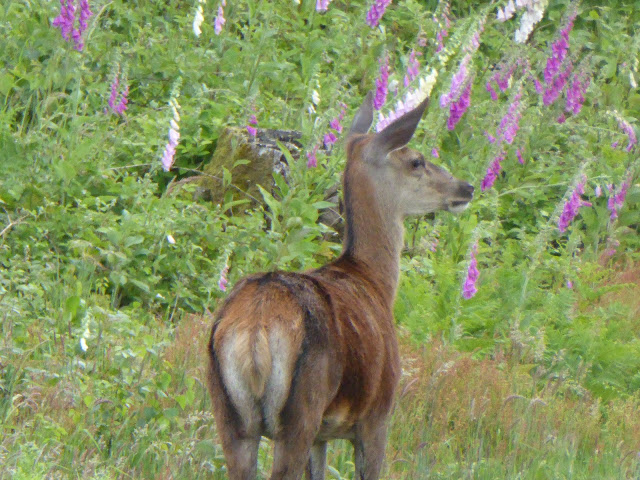 I have had it identified by an expert, (David Lewis) as a Red Deer, the expert says she probably has a fawn nearby which is why she didn't run.
We sat on the back of WaL and enjoyed a lunch in the sun, a total pleasure.  Then off we went, we hadn't intended to stay overnight.
So we retraced our steps down the Arm, then instead of turning left back down the Rushall canal, we carried straight onto the Wyrley & Essington aka Curley Wurley.


We stopped briefly at Tesco right by the canal somewhere, and that's where we saw our first boats moored up, they weren't moving though.
The cruise along the W&E was bendy and shallow in places but always green with wildlife but there were not many moorings.  From what I could see it was bricked edged concrete with nowhere to stake or thick lilies, but hardly any armco.  So it was a slightly longer day.

We approached Persall common, our intended spot for the night. and pretty glorious spot it is too.   About twenty minutes after I took these blue sky shots, the sky filled in and it poured.
Early nights for both of us. 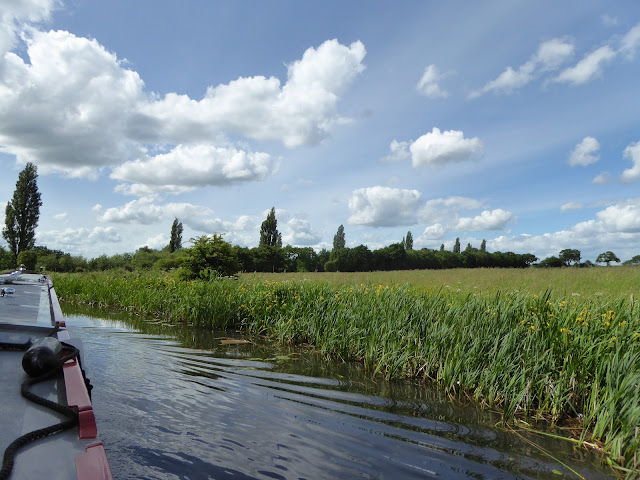 If 'Pinky' White said this, then he was a clever man, I completely concur. 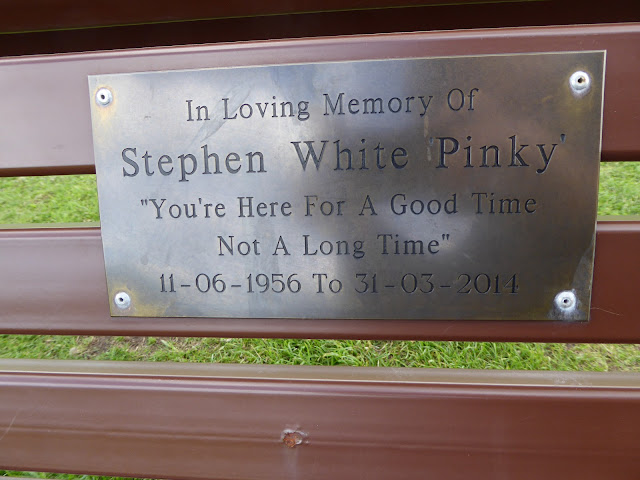 Lunch was steamed salmon with one of David's special salads and a glass of in the sun
Posted by Lisa at 00:57 6 comments: