Second day of our holidays

Day two and we're raring to go at the crack of 09:30 after the engine had been run.  Taking advantage of this HOT weather and doing a wash each day, leaving the clothes to cook on the clothes airer in the cratch and its bone dry on return.
Result.

David got me to drive today and he map read, well of course he is a man....!
We took a scenic route to Buxton via the Goyt Valley and the Fernlee and Erwood reservoirs.
So the Goyt is a valley starting high up in the Peak District.  The river Goyt runs through it and arrives at Marple and it flows under the Marple aqueduct.  But more about that later,

We wound our way along the valley and very beautiful it was too.  Lots of lycra clad cyclists here and by good fortune, we were able to drive right out, but the lane became very very narrow and one way in our favour.


Then on to Buxton and a most attractive town it is.  Bathed in glorious sunshine we popped into the tourist information centre and asked what we should see for a whistle stop visit.  Here is the Opera house below, we like a bit of opera but sadly not on tonight, only a play.  I asked about dress code and was told by the ticket office that yes, shorts, tee shirts and trainers is absolutely fine, but not for opera.... 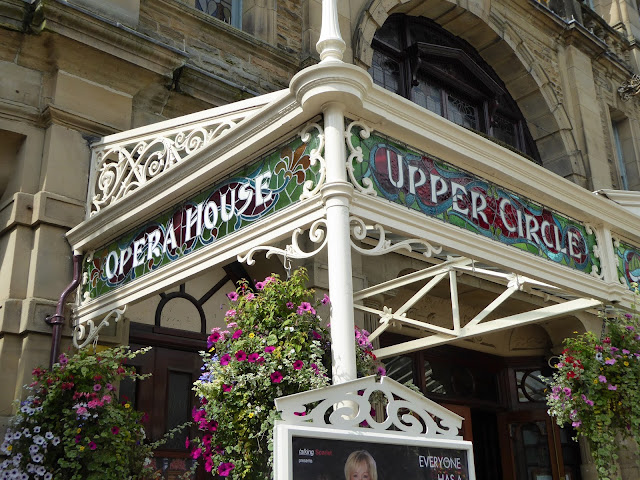 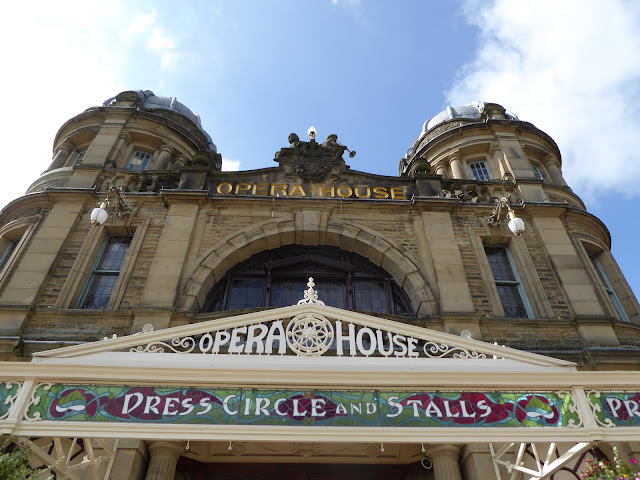 Around the corner, is this Dome.  Its the biggest free hanging or something, bigger of its type than St Pauls dome, can't remember, but today its part of the university and its fab. 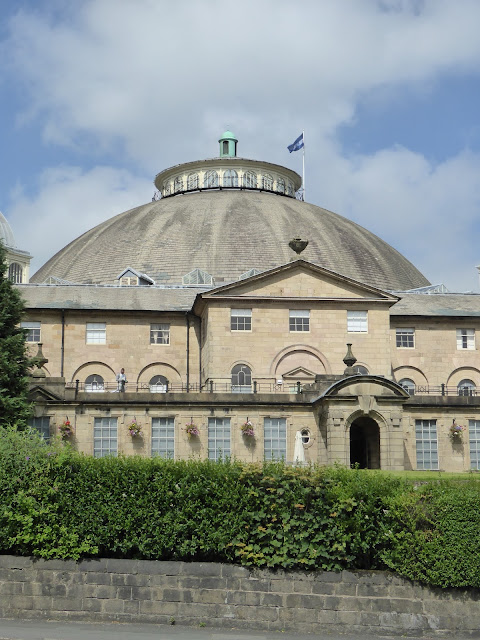 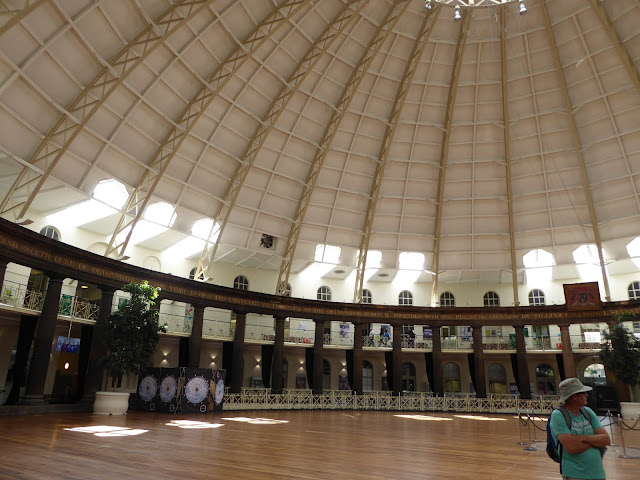 One of the most famous residents of Buxton was
Vera Brittain   HERE  (who's famous book A Testament of Youth).  A wee glass case in the dome had details about her, but I had never seen this photo of her in much later life.  She was attending a "Ban the Bomb" rally, I thought you may like to see it Reader.


Walking on and around heading for Costa and sushi, found Costa and sadly today for us this is the hotel, its under going a massive refurbishment costing trillions and willions its going to be a Five Star one.   I suggested to David we stay in it on its opening, he didn't say yes.


We carried on up the hill, looking for the art gallery, it was open but closing in three weeks for a major refurbishment too, its collection was away today with an exhibition of children's art.  So we flee in next door to the Green Man Gallery, what a find, local artists work on three floors and by now we were short on time, ten minutes left on the car parking, good thing we had our trainers on. 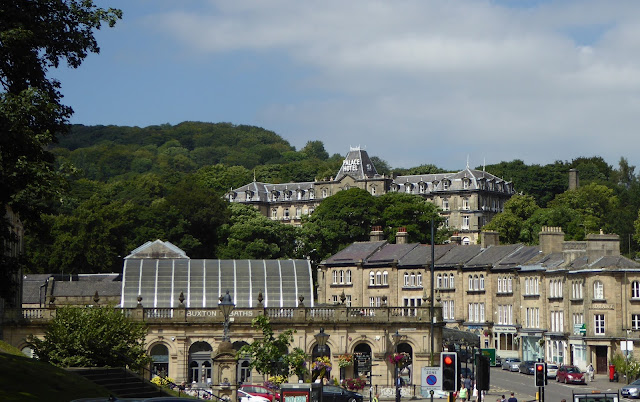 Ran back to the car with 3 mins left to spare, out of Buxton and headed for Dovedale.  Empty roads, I think everyone is up in the hills walking.
Another scenic route and we ended up at Ecton or there abouts.   We took the last parking space and followed our noses, I think we were at Wetton Mill, we went past a cafe without stopping, through a gateway and through a meadow to get this view. 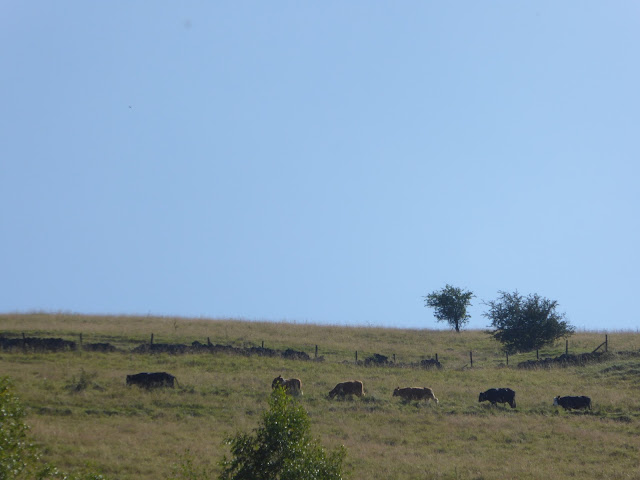 On the opposite side of the valley, these cows amused me, walking in line on a narrow path, I had zoomed in, they were pretty high up. 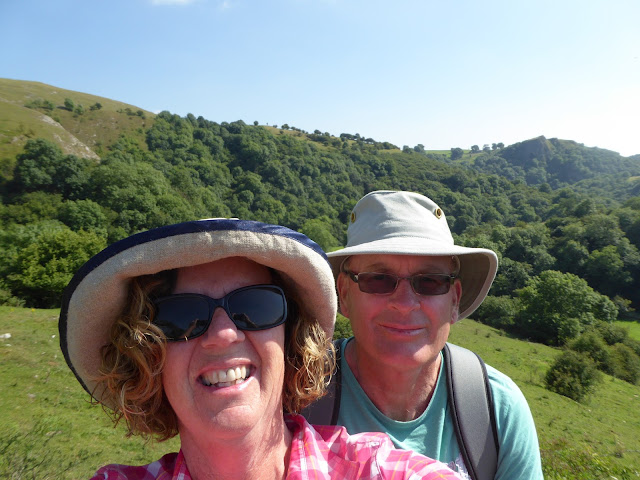 Now David had read recently that one of The Times best pubs in the country was very near here at Alstonefield, The George.  Now I am not going to say a single word more about it so you can draw your own conclusions or read my review on Trip Advisor.

But, while we waited for the place to open I saw this on a wall in Alstonefield.  It says that they used to sell coffee tea tobacco and snuff. 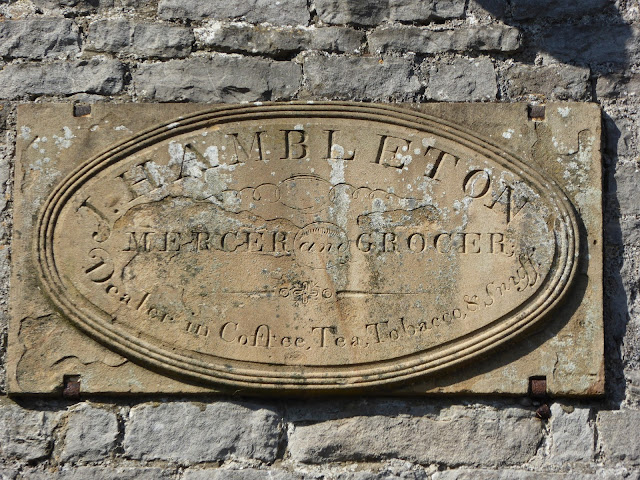 We went for a walk toward the river below, I didn't realise just how far down below but too far down for me.  However as I prevaricated a family with small children arrived up to us having walked form another village, the children simply had Crocs on their feet....  I carried on a bit further, it was very very steep now and I feared a fracture....


Then through the undergrowth, this popped up.  Small surprise

We left them to it, didn't go down to the river, but instead found a wall in the sunshine in a meadow of untouched grass and laid there for an hour....

"What we did on our holidays"

So welcome to our whistle stop tour of the Peak District.  David and I have never been here, in the dark and distant past we had quite a few walking holidays in the Lake District, you know the thing, dragging up steep hills reluctant young children with faithful promises of an ice-cream at the top, only for the children to discover no ice-cream van.... ahem, sorry for those lies children.
But this touring holiday promises to be much better, in the style of my grandparent's holidays of yesteryear, we drove all the place slowly annoying the locals.

First up.  Heading to Castleton, or "Cassletun" if you are from hereabouts.  I was map reading, not sure why, David thinks he is the only man in the house that can map read, we care not a fig for sat nav, we have long preferred a map and an argument.
But as I was in charge I said LEFT HERE! and he did, after a "where the hell are you taking us, this is wrong"  but I had seen a sign for the Blue John Caves and it sounded interesting.  Nothing to see from the outside just a wooden hut over a large hole in the ground.  But very interesting.
Blue John only exists right here, not all over the Peak District but right here under this one hill.  The mines were dug in part by the Romans in Britain mining lead, of which they used loads. But Blue John has only been mined for 300 years.
Down we went...

Its VERY lovely literally a stone of blue and yellow, or as the early French miners called it Bleú Jeaune (I think that is how you spell it from my school days meaning Blue Yellow, now with accent changes, Blue John).

The jewellery that is made up is only sold at this mine and in the town of Castleton down the road.  I tried very hard to buy a piece but I didn't like the settings, next time.

The way down into the town went down here, kinda took your breath away... 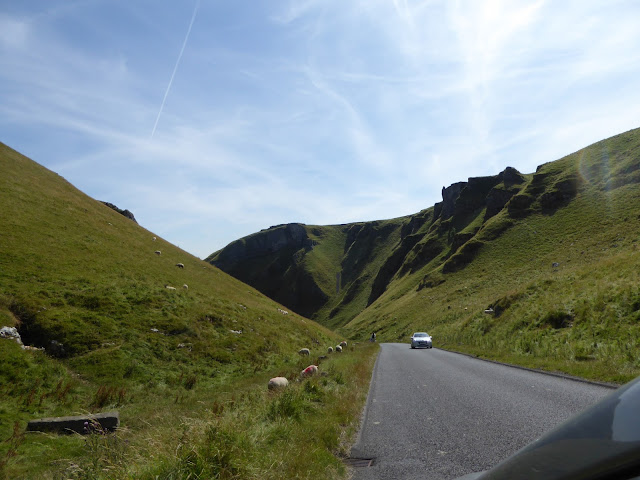 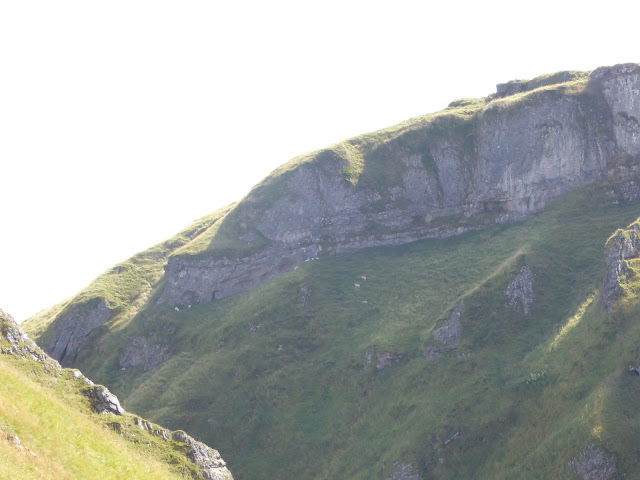 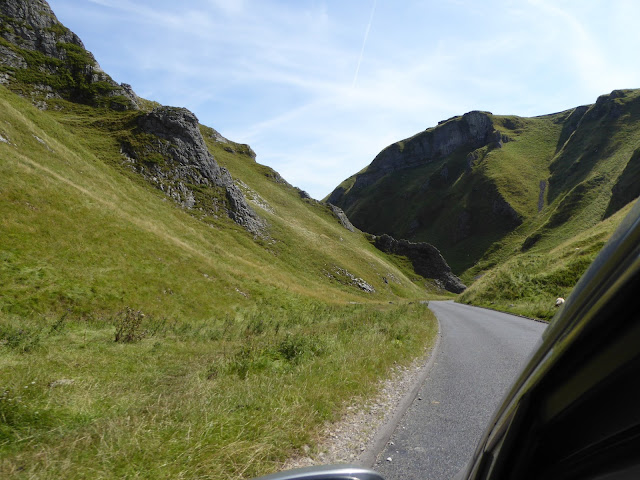 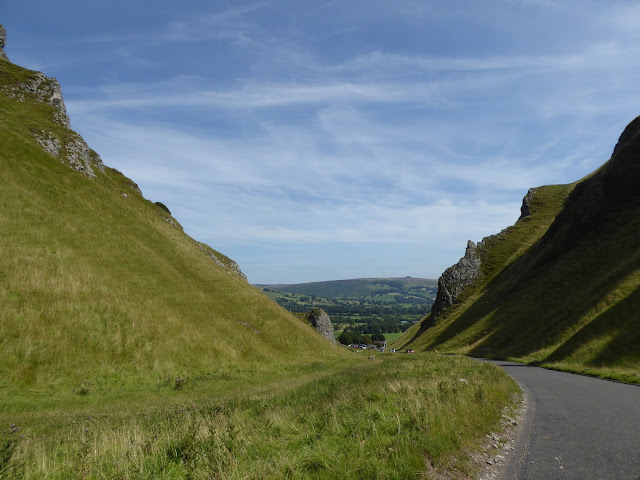 We wanted coffee, regrettably no sushi shops here, however, for an early lunch I had a Derbyshire cream tea, I had to wait a while, BUT, oh my golly, the best freshly made, crumbly, buttery, fruity scones in the history of me eating cream teas.
HERE The Three Roofs Cafe.  David had Mediterranean veg with mozzarella warm wrap which was also homemade.
A big fat WOW.

Next on the list of places to see, off to these big reservoirs, they were man made of course, but the area is very well served with parking all along the banks, cycle routes, footpaths and a regular bus service.
We took a track for a walk...

You can se how low the level is, actually 75% of capacity. But when full, the water flows over the wall between the towers into the next reservoir.   There is a museum here all about the Dam Busters raid, but sadly it is in private hands and the gentleman owner has recently died so we couldn't go.  For anyone too young to know  what the Dam Busters was all about read this.    HERE

This dam was used by the bombers as it was the most like the ones in Germany.  While we were driving up the valley to get here, a zonking great RAF plane flew over, too fast for me to get a photo of course, but maybe the RAF still use it for pretend target practice....?

After a lovely walk in the hot sun, it was getting late so we headed back towards Bugsworth, but via a very very pretty valley and village called Edale.  It was knee deep in walkers of all sizes and ages, all coming down from the fells.  We had a quick look around the tiny village then headed to the pub.


An amazingly spectacular drive out of the Edale valley over the fells towards home and Bugsworth Basin. 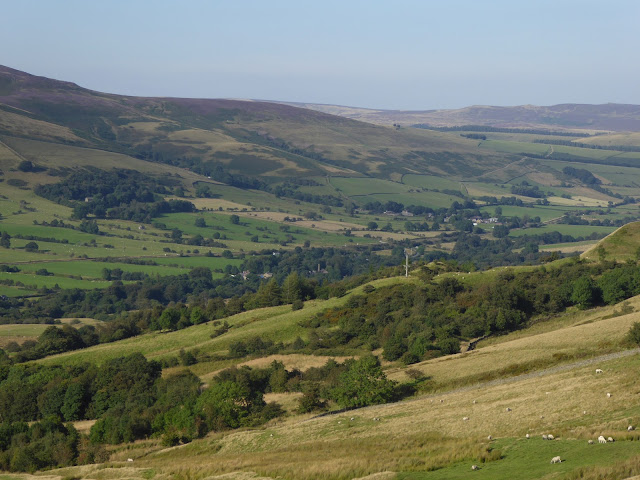 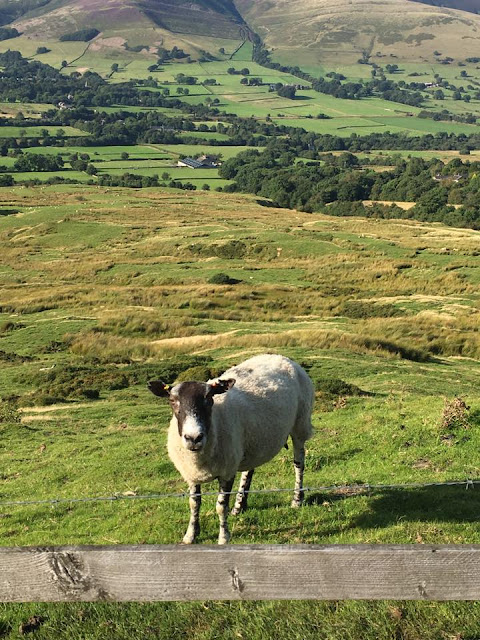