To there and back again

The day spent mostly dodging showers, a coffee meeting with the convoy, this onboard Seyella we have had flapjack then chocolate chip buns and I have to say Group Captain (Geoff on Seyella) makes the lightest most delicate butter creamed butterfly cakes I have ever tasted (worthy of Mary Berry herself), we visited the pie shop again and a cycle ride out in the countryside to there and back again, Lincolnshire is fairly big and fairly empty, then it rained again. 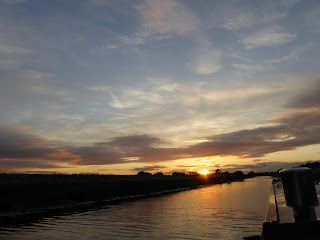 It is far more wooded than either of us expected yes and flat which has benefits if you are on too wheels.

Pancetta and mushroom risotto for supper.
Posted by Lisa at 20:39 No comments:

We have to get to Boston for the crossing ultimately, but we don't have that far to go, so no great shakes on time as there is plenty of time.
That in mind we moved today, Yarwood and Clarence went off early as "Pathfinders", the lock only takes two of course and I think all the boats wanted to use the services on the lock landing so no point in us going too quickly.

A little later Seyella rounded the corner and we set off .

Yes really 500 metres, I walked it as I am not great at climbing down ladders.  Group Captain leaps about all over the place.

Almost forgot, we went off on bikes to see the Abbey at Bardney and found this church in the next village, St John the Divine at Southrey  SEE HERE

The church is owned by the village and not the Church so to speak.  These are service lost form this village, they are in their uniforms from the 1st WW 2nd WW and conflicts in modern times. Their faces are copied from their own service records, You will see that two did not have photos on their records so their names only are recorded.  One soldier Private AE Longmate aged 22,  died 22nd October 1918, so very close to the armistice.It was the most touching and heart wrenching memorials I have seen.

I've never seen anything like it in my life..... as the song says

So here we are at Bardney Lock, in fact only three boats here currently as Clarence arrived later in the evening having brought guests down with them from Lincoln, who then departed on bikes back to Lincoln, and Seyella were entertaining their guests somewhere else.


This was the view of them last night.

This morning we joined Lesley for a walk with the Boys, her two labs Fletcher & Floyd.  But passing the lock.....


We spent about 20 minutes pushing and pulling, filling the lock then emptying it to no avail.  I called CaRT and we left them to it.

We walked down the lovely "Water Railway Line" which is now a biking route right along this section of the Witham river that was formally a railway line, lost in the Beeching Rail cuts of the early 1960's.
We went to the church which has an exhibition in one corner all about the important Abbey which is here.  There is a great butchers which sells pies, which we brought and took home for lunch.  Really really good. 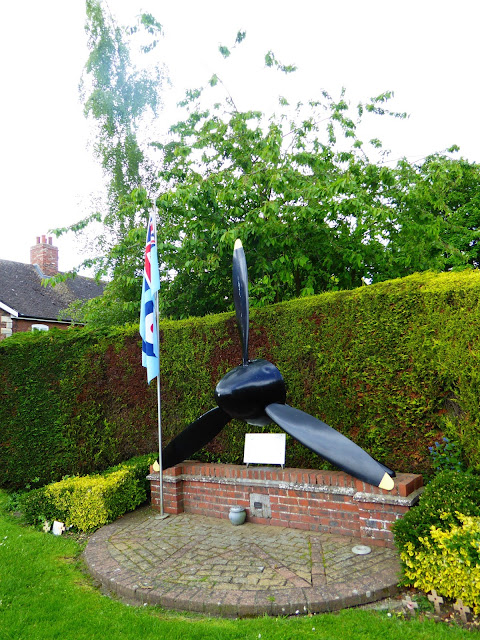 
It seems that Sundays are not good days for visiting cathedrals, evidently its their busy day so we went on a Guided Tour on Monday morning.
I was very pleased to see it was Vic again who had done a brilliant job on our Town Walk previously.
There was a Roof Tour with over 100 steps and a Tower tour with who knows how many steps..... it was freezing today up on this hill with the cathedral perched on the top, so there was no way I wanted to go up any higher. 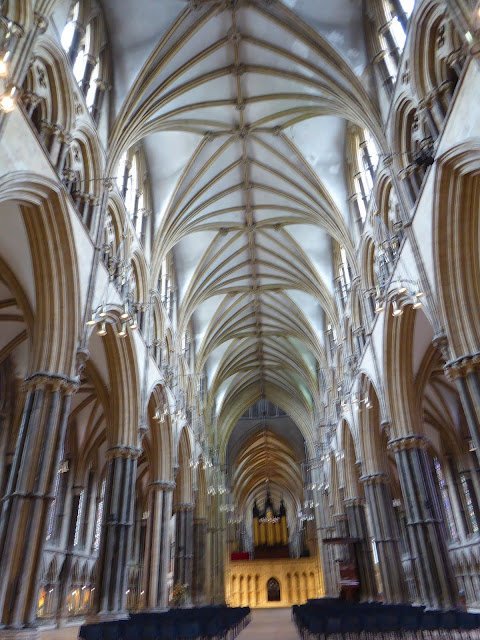 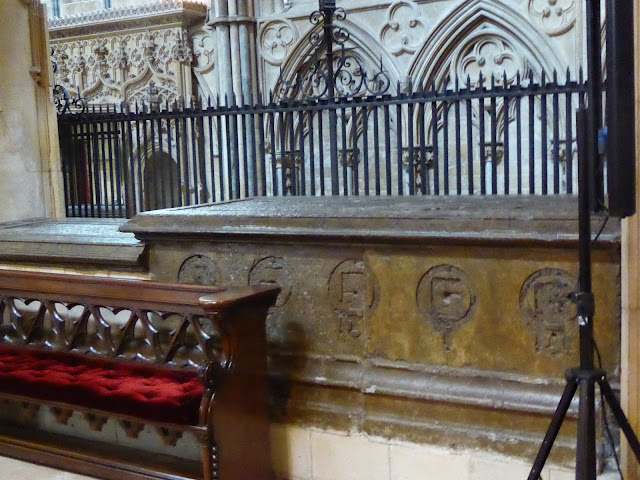 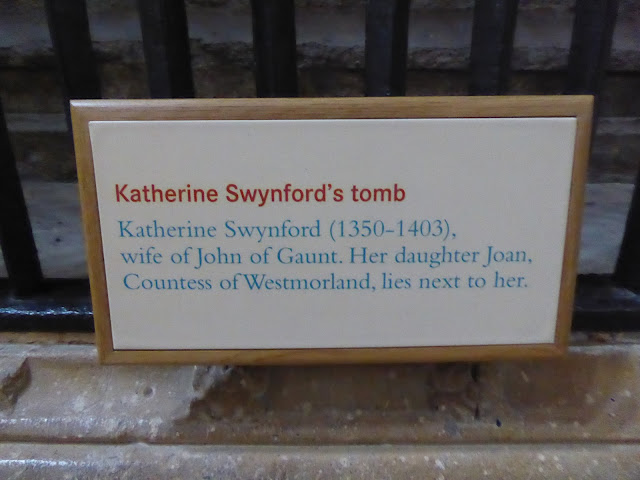 During the Reformation the Puritans and co removed the brass handles and maybe other decorations from her tomb, its very plain now, however it is next to the alter and opposite the tomb of the founding bishop of Lincoln Cathedral.
Not bad for a commoner.

When the cathedral was built, started in 1087 I think, originally a fortified building for William the Conquerers army as it took a further five years to quell the Saxons after 1066 and all that.
They painted the cathedral white, not the dirty stone colour it is now, the faces statues and flowers that adorn the building throughout would have all been brightly coloured with blue red yellow etc, the effect would have been to dazzle the uneducated peasants and Lords alike, a taste of Heaven on earth.  In a few tiny places you can still make out traces of the coloured paints form centuries ago.  Vic really didn't like Oliver Cromwell at all.

When the cathedral was finished on the top of the centre tower was a wooden tower as tall again as the stone tower, in its day it was the tallest building in the world.  The top of this tower would have appeared to have pierced Heaven itself, thus adding to the spectacle of the thousands of Pilgrims who made the pilgrimage to Lincoln to curry favour with the Lord.
It can be seen today from miles around this flat fenland and its not even white. 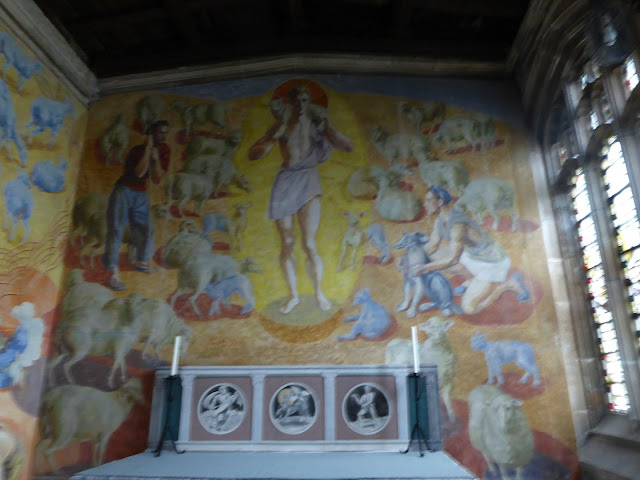 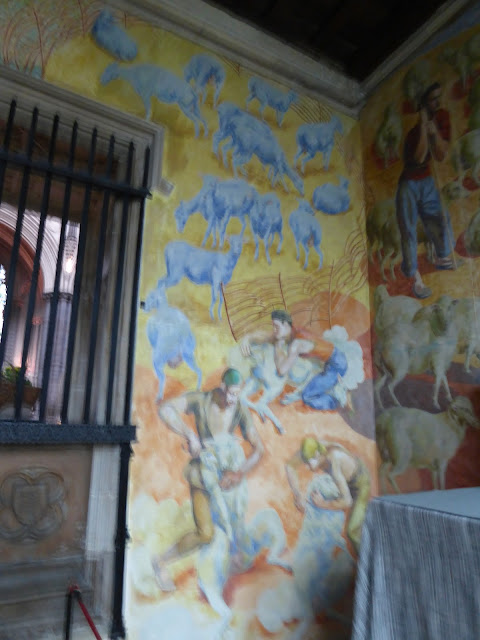 We were later than we had hoped to be and as WaL was blocking the "Yarwoods"  so we hotfooted it back to the boat via the famous pie shop on Steep Hill that we had passed by all weekend, and I can report that the pies are indeed as good as they sound.

Jumped aboard, thick winter clothing put on, this for me included a warm hat plus gloves and away we go.
The traffic lights at the end of Brayford Pool showed green so in we went, slowly..... I now understand this light has nothing to do with traffic, but river levels, so I was then surprised to see a yoghurt pot (Cruiser) in the bloody way!


Some annoying man who likes scaring women, told David some days ago that we wouldn't get through this lock, he said something like the books says 68ft max, if this was the case then we at 70ft and the longest of the Wash Convoy would have had to have retraced our steps and long way.

After some research into it and available info DOES vary it was decided that we would have a bash, on our own, in a diagonal fashion.  My first ever guillotine lock and I did end up with an aching finger and you have to hold the button in for ages and ages.
The cill was the concern, instead of it being 2ft or 3ft poking out from the gates, this one pokes out 8ft or 9ft. David had to reverse over it several feet to get around the lock doors but no problem and away we speed eastwards


Cold but moored up at Bardney on a nice floating pontoon mooring.  David made chorizo and courgette pasta.

A long day, long blog, well done getting to the end Reader

We had a lazy morning following yesterday, lots of nothing went on but the Usher Gallery here in Lincoln opened at 1pm today, so I managed to be dressed by about 11am.   David had read that they have work by Lowry  and Turner.

They had an exhibition on Women and how they have been portrayed through the last centuries. Here are my favs;


Phew got that?  I bet Group Captain does not put up naked women on his blog...

David marginally disappointed that the Turners' and Lowry's are not on display today.
By the time we had got half way around the Museum of Lincoln, it was 4pm and they were closing, I had only just started Saxons and Vikings, so we will have to come back again one day.


So then off to visit Lincoln for the first time ever and certainly not the last.  We all left the boats to follow our noses up this steep hill, so steep it's called Steep Hill, to the Information Centre in town where we booked onto a Walking Tour.  There we met Vic who was a bit of a star.  He had only lived here since the 1960's and confessed he was just settling in.  He had a way of imparting knowledge that really bought you in.

So whoever knew that Lincoln was one of the biggest and most important trading cities in the country?   Well that was going back a a bit.  The Romans or maybe their slaves built The Fossdyke Canal, which brought ships and thus trade, The Anglo Saxons followed on and The Vikings just sailed up the rivers causing a bit of havoc on the way, then in later centuries the same rivers gave huge trade to the city from certainly all over Europe but much further afield too. Many languages being spoken around the ships anchored here in Bray Pool.
Before we visited here I am not completely sure I could have been able to point to Lincoln on the map.

Vic pointed out to us Roman remains, and as we were only the five of us he took us in here, to a beauty parlour on the high street, well this was a first for Joe David and Geoff thats for sure.


It is such an amazing thought that we still have these treasures almost available for all to see here in the city centre.
Look again at the illustration above and here below is a remaining a section of the wall of the complex.  Roman walls just sat there!!!!!
Amazing. 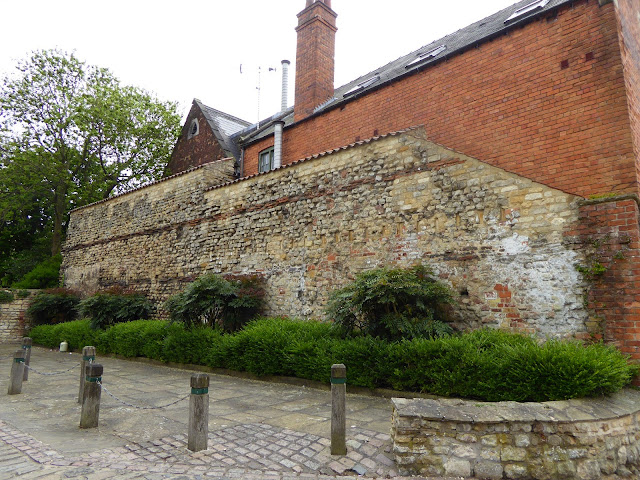 More treasure, look at these; 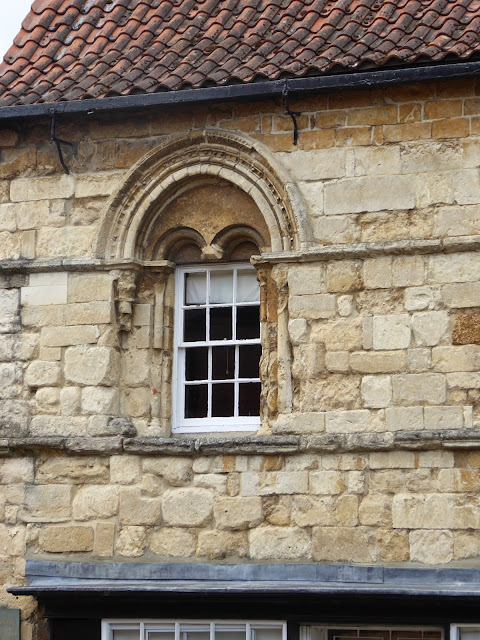 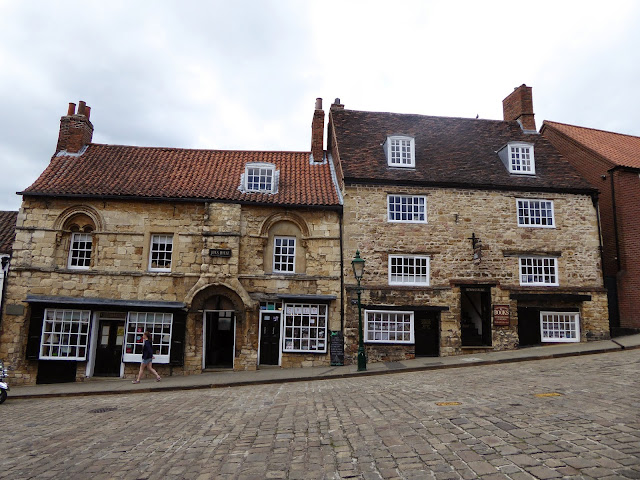 These are Medieval buildings built in stone, highly unusual.  Thriving Lincoln had businesses and merchants aplenty, however if one reads their bible, Old Testament, you will of course know that to trade here you had to be a Guild member, to be a Guild member you had to be a Christian, IF you were a Christian then it was against Gods holy law to lend money, now the Jews however were fine on that, they became society's moneylenders, as Vic pointed out, it was a gap in the market, so these houses were built in stone as the more usual timber framed houses weren't considered safe enough to be the early banks.
Not very PC but called The Jew House, later David Lesley and I had a FAB lunch in the restaurant that it now is. 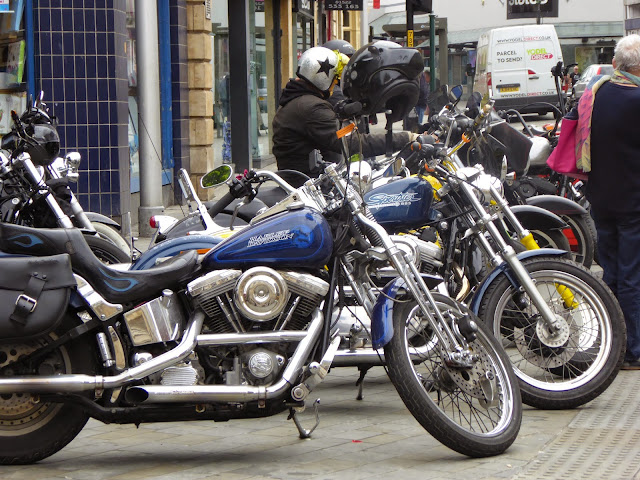 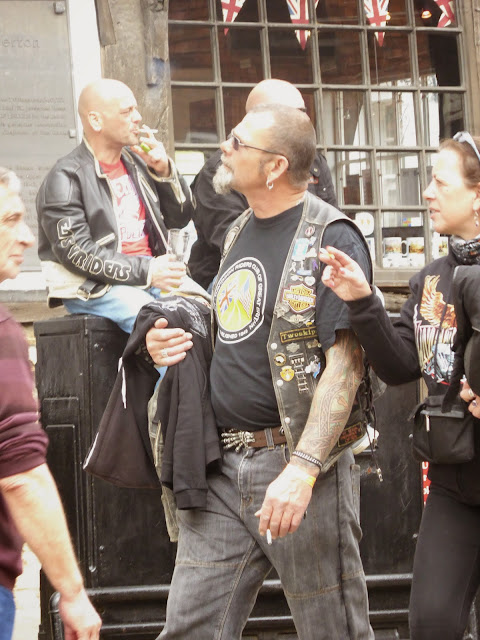 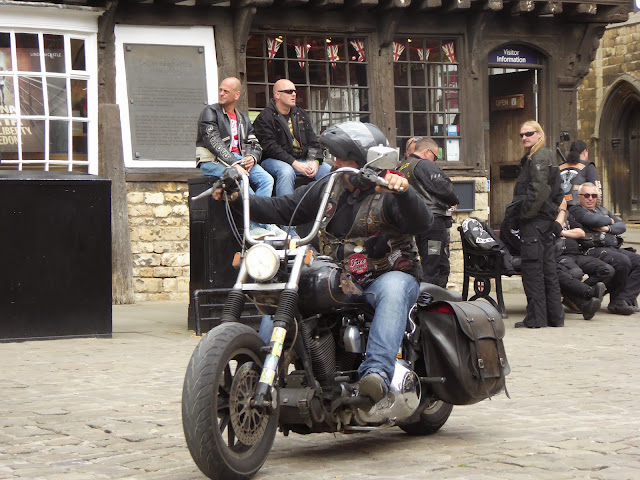 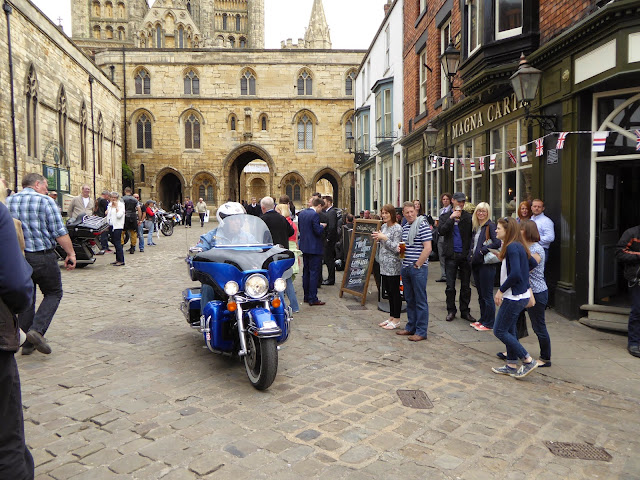 Now making this a little bit surreal was all these motor bikes, Vic informed us that it was the first Harley Davidson Gathering/Convention/Motorfest to be held in the UK for 22 years, so amongst all this ancient history and culture were this horrendously noisy bloody things full of people who simply looked like they needed a good wash,    (Ooooo sorry that was my mother talking)  however they caused little trouble aside aggravating me and they spent their good gold in the shops here.....


Altogether an enthralling day in Lincoln learning much, a good lunch, then the castle when Group Captain rejoined us after lunch after walking the dog to visit the castle.

Here are a few magical pictures from the afternoon.

For much better pictures go to HERE  or HERE

Dinner was lunch at The Jew House, sword fish followed lamb and something.
Posted by Lisa at 21:43 No comments: