Dropping down into Braunston.

The weather forecast said rain later.  D was up and checking the forecast and then it rained.
So we delayed leaving Norton Junction or I should say I delayed getting out of bed.

Then as I was comfy with tea and a good book....
"I think we should go, there's blue sky all around!"
Now of course the half baked plan had been to go early through the Braunston tunnel, if you don't know it Reader it's quite a long one with a nasty dog-leg at the beginning if you are going our way.

So we set off, it was chilly so I was putting on suitable thermals.  As we approached the tunnel a boat pulled out.  Not usually a problem, he didn't make us brake or anything but it very quickly became apparent that he was a single hander.  Large groans from wife here.  This can, not always, but can mean that wife is doing all the work for two boats at the six Braunston locks.

Into the tunnel and all went well, we only met one boat and no bumps or tinks at all.  We got to the queue of boats waiting at the landing and we were number 3 of four boats, Result!  Single hander went with the first boat who had several crew and we went in with the hire boat which had crept up behind us also with three crew.
I love it when this happens.

Well, after the first lock I warmed up a bit and took off my outer coat.  After the second lock I took off my second coat.  At this point I went forward to prep locks and then of course the heavens opened and we all got a good soaking with my coat out of reach.

Finally down and out of the bottom lock, unusually for Braunston there were masses of moorings.

We walked right around the moorings in Braunston looking to see if we could spot Al & Del of   HERE  but they weren't to be seen, but David did buy a bargain of a broom in the shop here, a long handled one for £1.99


In doing so this couple of injureds both had leg ache, him from a squash match last week and mine from being a bit too enthusiastic at Aqua a few weeks ago.  We have to pop home in a week or so and I think I'll book a couple of physio appointments...

So sadly without seeing a single hare, we departed from this gorgeous mooring.  It was sunny, for a while and then it wasn't.  We saw a dead ewe on the canal side, I looked away, I guess it might have been a fox after its death....

Crick was pretty empty, but we didn't stop.  I put a coat on to do the Crick tunnel as when we went through the Husband's Bosworth tunnel I got a complete dripping on as it has small streams cascading onto boats, I then froze.  But only a drip or two in the Crick one.

We came out the other end where the wind was blowing and the noise from the M1 got louder.

A small queue at Watford Locks for us, then the lockkie set us off.  He had already filled the bottom locks for us when as I got sight there was a lady in pink emptying the last lock!

I yelled like an old fish wife in the distance and she stopped then a bit sheepishly.  Turns out they were inexperienced Hirers and hadn't seen the sign for crews to sign in.  As we left the last lock passing the sign we saw it was pointing to the canal, hopeless if you had walked from along the canal as they had.

Nicely there were spaces for us at Norton Junction.  We spoke to another boater who had followed us down, she said she hadn't decided whether to turn left towards London or Right towards Braunston, isn't that just about the best thing about boating?  Shall we go here or there?

At six we met friends Sarah and Andy, not only do they have a narrowboat but they have two and were on their way home from a fabulous ten days aboard NB Enceledas reaching Bugsworth Basin    HERE

We all had a good supper at The New Inn, reasonably priced and huge servings.

I had lasagne, salad and chips, I couldn't even contemplate dessert.

Hello Peter how are you?

So we enjoyed our evening at the Laughton Hills. 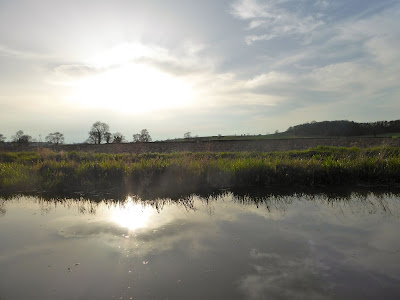 The next morning we (David) collected the car from Debdale on his trusty Brompton.  Over the winter he had it serviced at home,  the bill whilst smaller than last winter's bill was substantial and I can confirm to you Reader that he has now paid out far more than the initial cost of the bike.  However, he does cycle miles on it and a daughter says its still much cheaper than the gym.  So back to the point of the story, we nipped off to visit lovely friends Ed and Jane who have a fabulous B&B, in fact the very B&B we four (The boat Sharers and us) stayed on we think ten years ago when we very first visited the Crick Boat Show.

Lovely to see them again and I left with a huge coffee cake in my hands, a present from Jane.

Ed is a sheep farmer and confirmed to us what we could see that the land is very very very dry.  Reader you may not have noticed but this winter past has been a a dry one with not nearly enough rain. 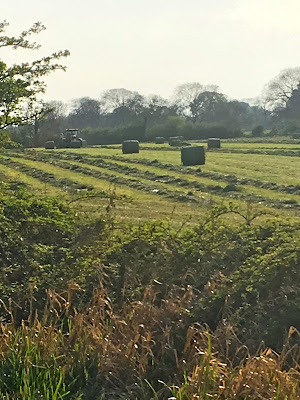 So this is silaging and its similar to haymaking but different.  Cows love both, but its easier to make silage with modern tractors.  This usually takes place in May,  David reckons its about three weeks early, another sign of global warming except today I am wearing a vest.... 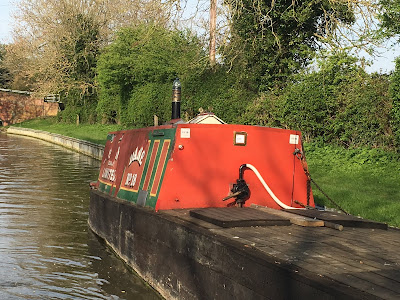 This lovely old, really old boat was on the side, you can tell it's age non boaty Readers as it has a wooden hull, now I can't remember the name, and sadly I can't be 100% sure but it could be NB Dane, if that is correct and please do tell if you know there's a link   HERE

We were delighted to see Peter.  Reader you may remember that we first met Peter our very trip out on WaL.  He's a boater of many years standing and goes out on this boat that he fitted out himself.  He's ex RAF, and avid bird spotter, reader on his kindle and plane spotter, there are many of which here as there's a nearby airfield.  Oh and Peter is 90 this year.  We always stop to chew the fat and hope that we might be doing so well at that age.


This is my second favourite mooring, actually where we met Peter. Its mostly had winter wheat growing in it making it a favoured place for hares, that is to say giving them cover.  I love hares.

At this spot two years ago I spotted many, you'll have to look back if you too like hares to see them.
Okay, I've found the lovely hares  HERE

So supper was the very last of the delicious left overs from Easter.

Later than usual but we're away....

We arrived at the boat the other day Reader, oh the joy of it, a hot sunny day, David in shorts and a tee shirt and myself in a skirt without tights, this event usually only occurs way later in the year.  I guess that's global warming for you.

We got to the boat and if you can believe it, WaL started first time, a nice surprise.

We hadn't intended to leave the marina but we did, we hadn't intended either to go much further than the delightful mooring down the canal, but we did and certainly I hadn't intended to do the Foxton Flight, but to sit in the glorious sunshine and watch some appalling helming coming out of the locks into the basin where one female driver came out of the lock at speed, failed to achieve the handbrake turn necessary and ploughed into the hatch shutter of a moored boat on the other side of the basin.
I held my hand over my mouth as it happened in horror.  Thankfully the shutter remained in tack and in place, she then reversed at more speed and rammed WaL amid ships.

The lockkie came down to tell us that instead of a two hour wait we now had a five minute wait and we were to proceed up the flight to half way and wait for the five boats to descend.

Lots of visitors here, willing hands to help get us on our way.

Then a short hours cruise to of course the glorious Laughton Hills.  I heard a rustling in the reeds but the occasional sighted Water Vole was hiding.  A Red Kite was playing on the wind right above WaL though, I was only slightly disappointed as I had said to David I wanted to watch the buzzards, neither of which we get to see at home. 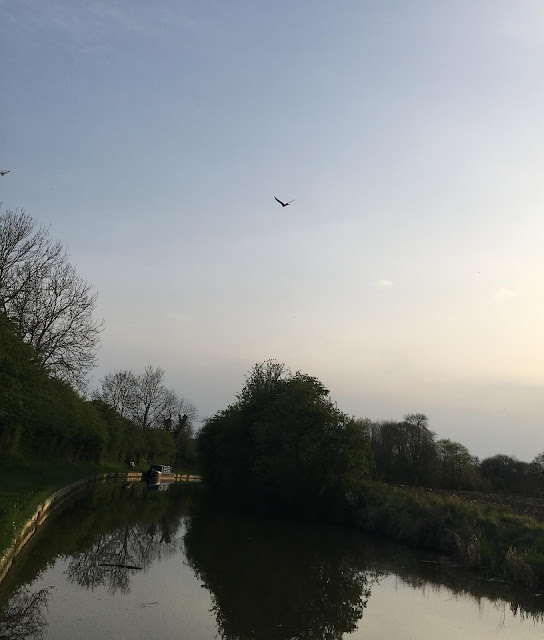 Supper was a cracker, our daughter is a big fan of Yotam Ottolenghi, she has his "Simple" book and as a treat for Mothers Day appeared as if by magic and cooked up a feast, she then repeated the treat on Easter Sunday (David cooked a small turkey) and she did the rest, so we brought the leftovers up.
Fantastic