So carrying on from last evening this was the stunningly lovely sunset.  Although I have seen from Social Media sites that lots of places have had marvellous sunsets these past days, none reported from The Leicester Arm though. 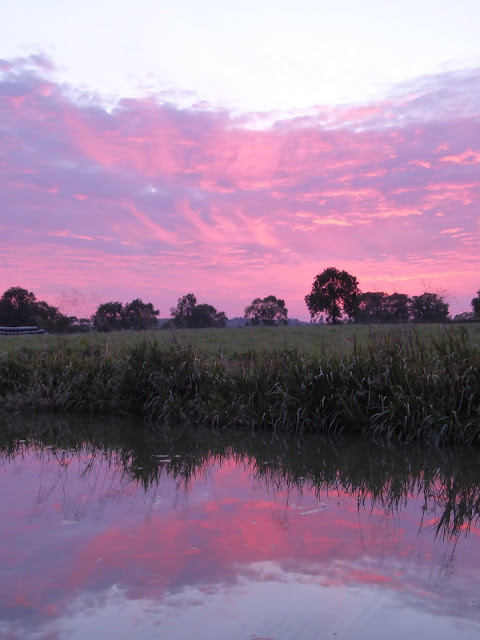 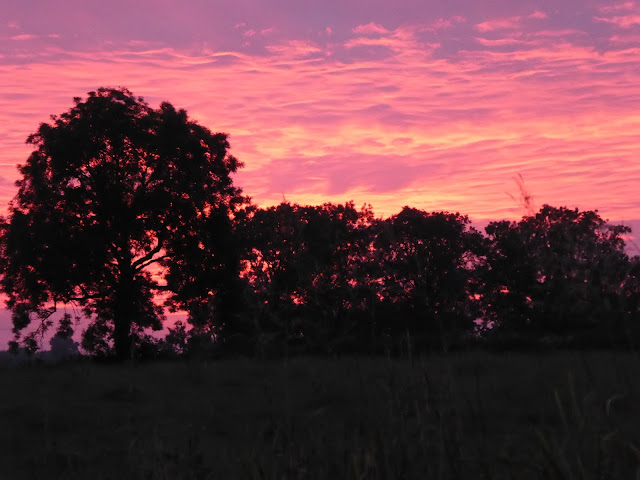 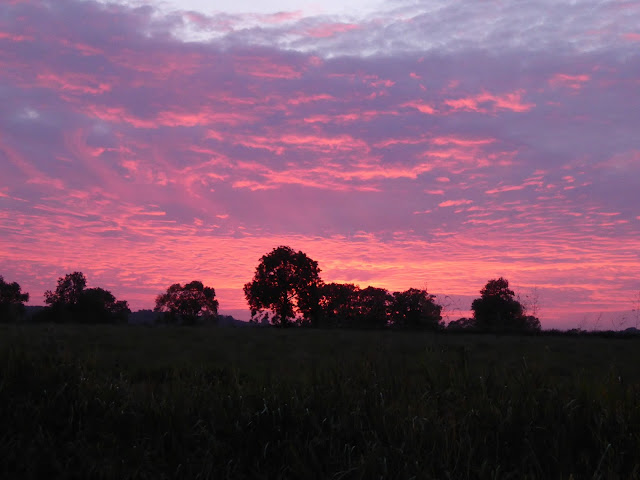 But this was today setting off, nice and relaxed about 9am, pootling along but both of us feeling sad really.  When we leave The Laughton Hills, right here, there is no going back, meaning that we are almost home and going to leave the boat. 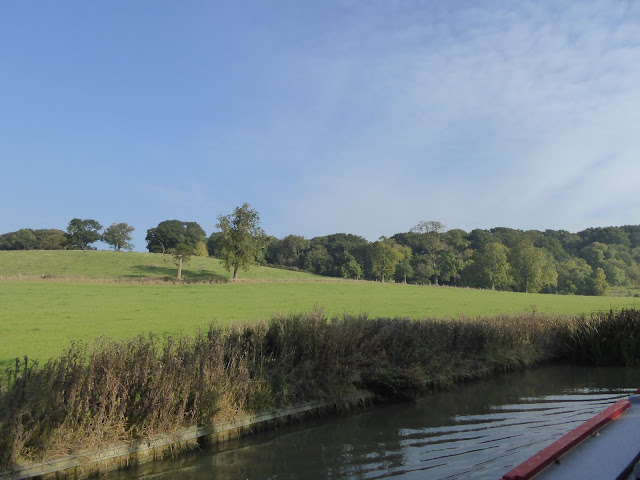 He has lovely brown legs, but scarily white ankles and thighs. Luckily small children and other civilians don't get to see them. 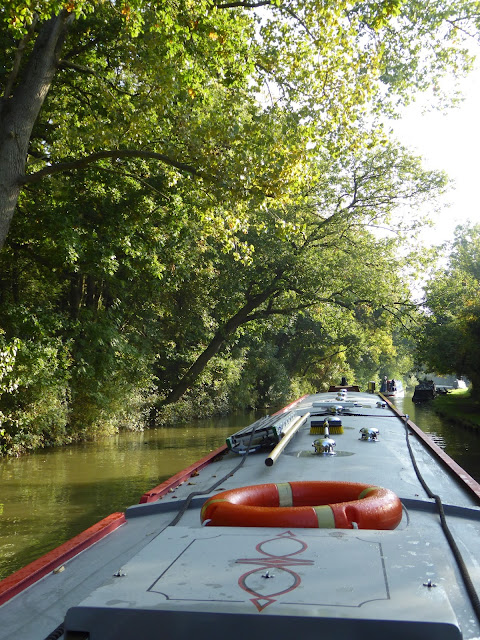 Look at these trees leaning....  I think its best to shoot under these as quickly as possible.  It reminds me of that children's party game Oranges and Lemons where the chopper comes down to cut off your head.

We arrived at The Foxton Flight, where there was a bit of a bun fight and all the locks were shut.

Well, back in August this happened   HERE .  An elderly lady of 78/9 years, stepped backwards off of the pedestrian walk way to let someone past who had two dogs on leads pass.  She simply toppled backwards down into one the water filled pounds and with unbelievable bad luck at the same moment as one of the paddles was raised on that lock sending water from the side pound where this poor lady had fallen,  into the lock by way of an undergound tunnel, so this poor thing was sucked head first through the tunnel in the surging water and came up in the lock.  Her only bit of good luck was that it was a short boat and there was room for her to come up to the surface (Had it of been a longer boat like WaL which fill the entire lock, she would have stayed under the boat and drowned.
So with a head wound and a shoulder injury this poor poor lady was airlifted to hospital.  I understand she survived by a miracle.

Well Health and Safety decided first of all to fence off all the pounds to prevent a reoccurrence.  Then had a rethink and decided to "Block" the tunnels somewhat by placing large wire baskets full of concrete lumps in front of the tunnels so people can't get sucked in again.  It was one of these baskets that had split.
We arrived at about 10am and the engineer not expected until 2pm.
We pulled back, moored up and went shopping in Market Harborough in the car.  We got most of the errands completed and new shoes each and by the time we had returned to Foxton, parked the car and walked back to WaL all the other boats had gone down the flight.  We stayed put  and decided to go down early the next morning. 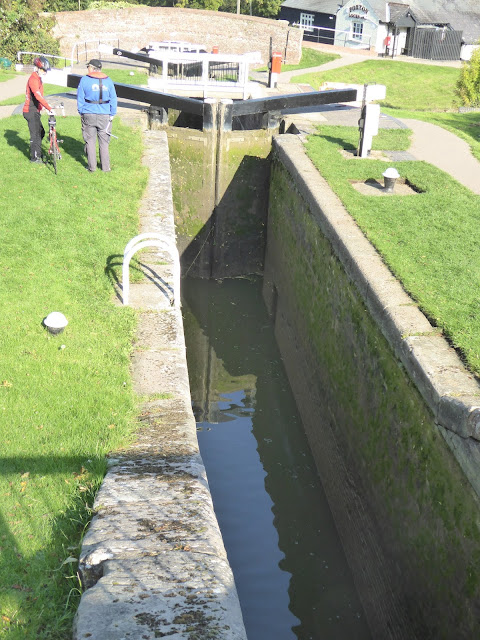 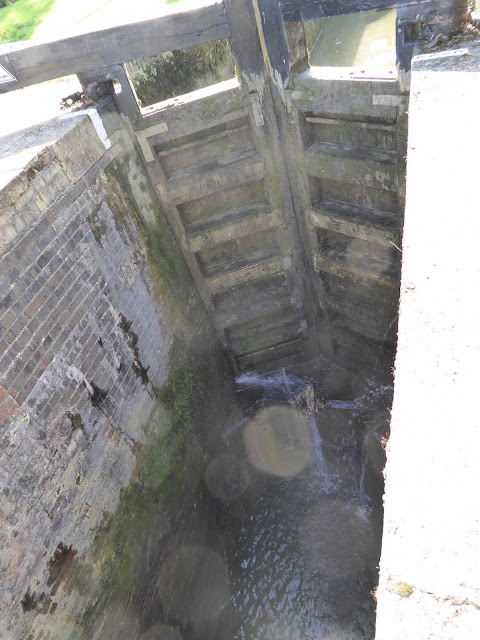 We brought Pizza Express pizza's from Sainsbury's in town and had them for supper with coleslaw, a few wedges and salad after a smoked salmon starter.  We had been going to eat at Pizza Express in town but it seemed a shame not to be on the boat for the "Last Supper"   I also had a chocolate Sundae but David has a will of steel and declined.  I could have brought him one and eaten two.

Next morning bright and early off went his nibs to report ourselves into the queue for the descent at 8am.

I look upon Foxton as a total pleasure and love to be here.

David was squawking that he was cold and he wanted to do the locks.....  Imagine not wearing trousers and then feeling cold? 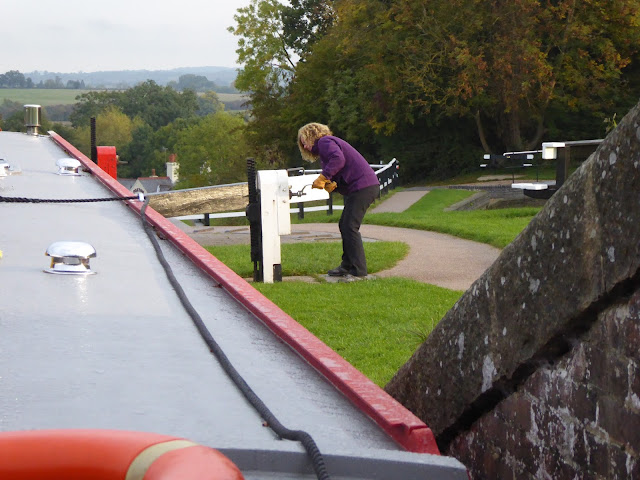 So with the last lock complete and a cheery thanks to the lovely pair of volunteer lockies we made our way the mile or so to Debdale Marina.
Its a bit like moving house when you leave the boat with all the "Stuff" that we have used since WE BEGAN  back in April.  It will seem ages until we return, but in the meantime theres's a wedding to host at ours in April, these daughters are marrying thick and fast.
Its been the most brilliant adventurous trip and I would like to thank those Jolly Chums Joe and Lesley on NB Yarwood plus Boys for a Fabulous Summer....  Lets do it all again next year?
Posted by Lisa at 23:56 3 comments:

This was our mooring yesterday.  Great spot, did I even say that we love the Leicester Arm? 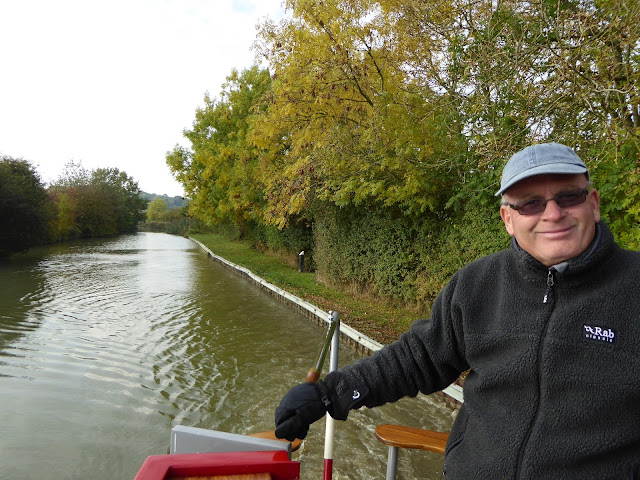 A cold morning but I am enjoying the Reflex Stove being lit.  Its a tad unfortunate that David's internal temperature is about 10 degrees higher than mine so after a 'Full and frank discussion' about the stove it now is on and staying on.
There was  a real risk that I might have been forced to say if the stove goes off then I go off the boat.  A dangerous ploy I know as he could have well stayed out another two months or so and been very happy too..... however a peaceful understanding was reached. 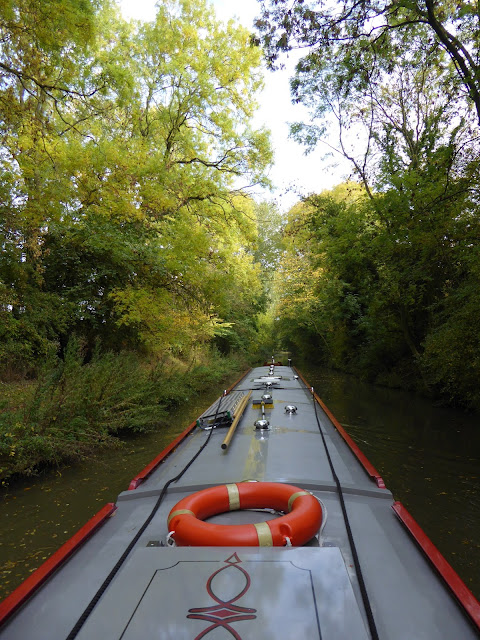 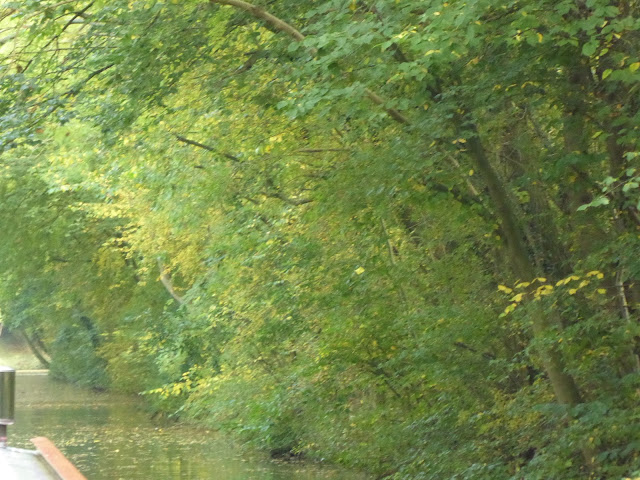 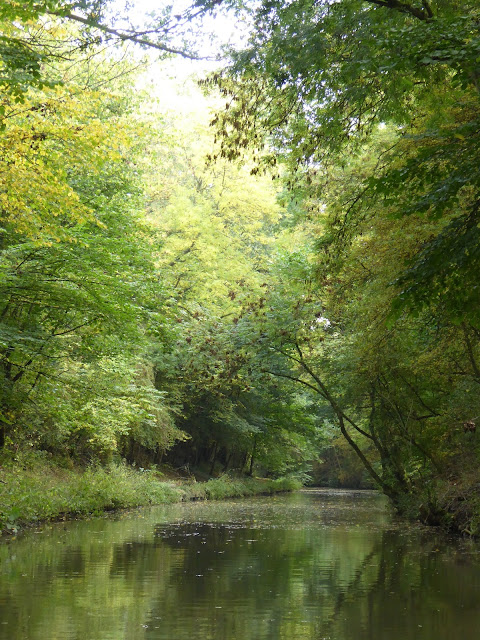 Out the other side and the rear of a boat we recognised came into view, it was Sarah helming NB DulcieBlue.  They had spent the night down at Welford on the Welford Arm. 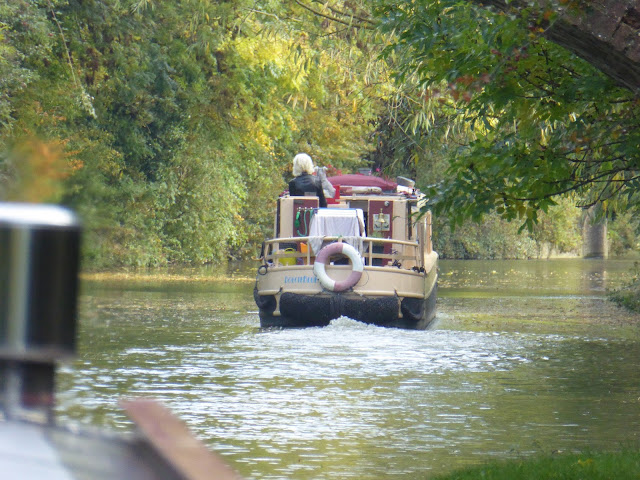 This was our destination.  We always make a point of stopping here.  I believe it to be the most lovely spot in Leicestershire, if not the UK.
The Laughton Hills. 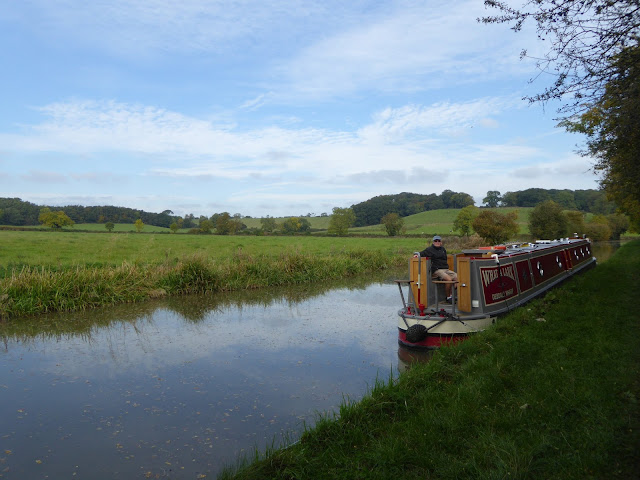 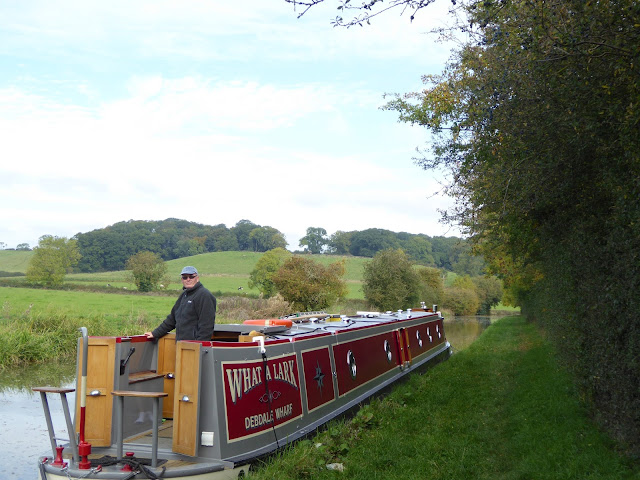 Parked up, tupperware in hand and we're off, yes of course blackberrying.  This is a grand location for them, I can't tell you in detail where to go  but its up that hill behind him.  Although the majority had been had, we picked plenty and David had already brought a carrier bag of bramleys from a garden gate on his bicycling travels the other day.
Ready Steady.... PEEL!!!


Look at this lovely long stretch of straight mooring.. 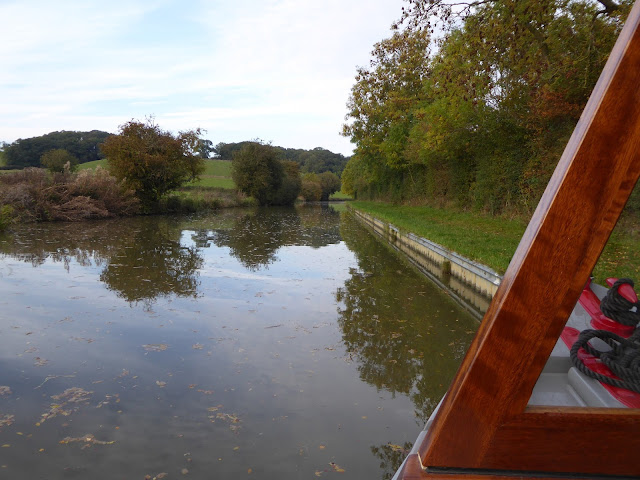 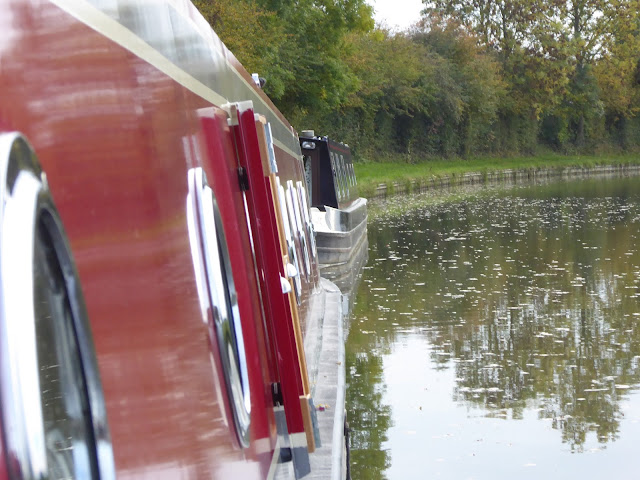 So why the heck did this lone boat moor up right on top of us?  I am the first one to move up button to button on moorings but flipping heck mate did you have to?

On previous visits here I have been lucky enough to sit, for a while, in silence, not moving and spy "Ratty"  yes water voles.  One spring there was a mother with two babies in turns playing and getting on her tummy.  I sat in the cratch and did see one fleetingly a couple of time flit through the reeds, they seem to spend the time between the reeds and the bank side.  Its a privilege to view, so sorry I wasn't able to get any photos though.

We plough the fields and scatter.... or we used to at any rate.

We left after a relaxed breakfast, as it happened just moments after NB DulcieBlue.  No set plans except that we really did want to get TV coverage tonight for the Rugby match, Wales v Australia.  We figured to go the Welford Arm moorings.  I started off on deck then as the cold air was rushing past my ears, I offered to make my beloved a nice coffee, anything to warm up inside with the Reflex Stove going strong on setting 0.75!!!!

The scenery here on the Leicester Arm is amongst the best of any of the canals on the whole system.  David and I usually go up and down several times during the boating year but not this year, we left going north from Debdale Marina back in April and so its been a whole year since we were enjoying it here, so we are not in any hurry.

We landed a couple of hours later about a mile south of the Welford Arm.
David enjoyed a little bit of farming for a while, he hasn't done that in a while.  We walked over the fields towards Welford village to The Whalf pub for a tasty lunch.  I ordered medium haddock, and David ordered large haddock for only £1 extra as he was hungry.  When it came I had a good sized piece of fish and David had two the same size as mine!! 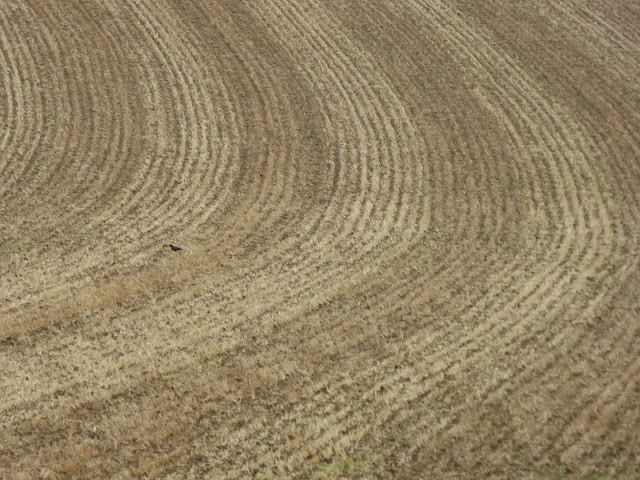 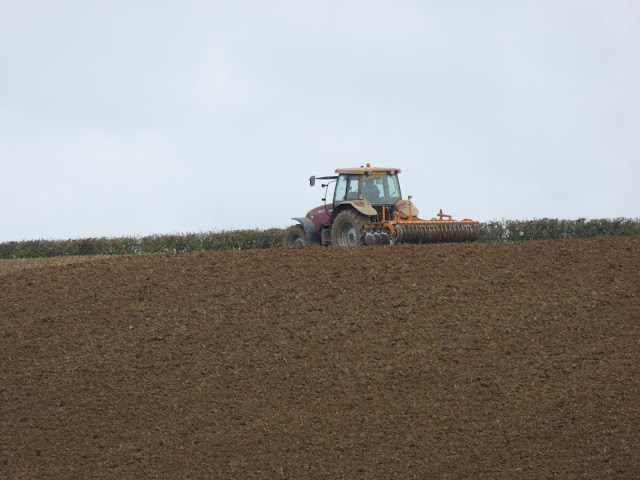 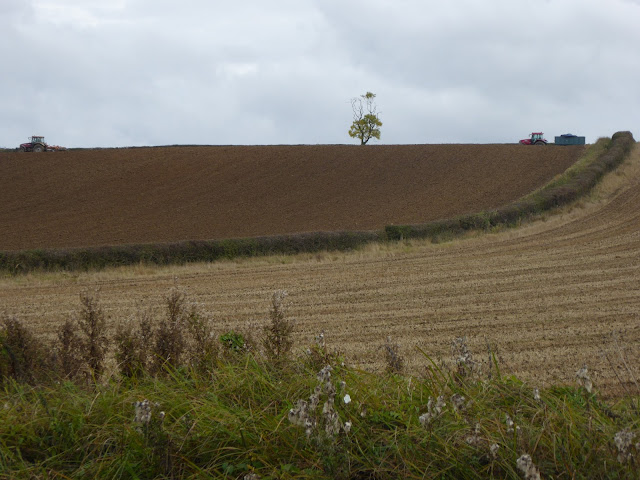 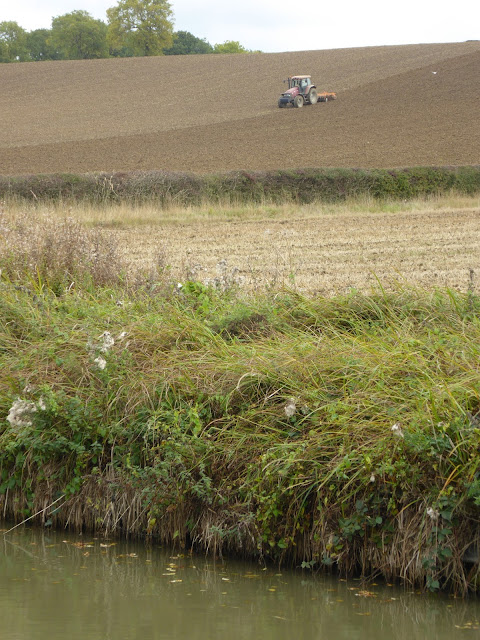 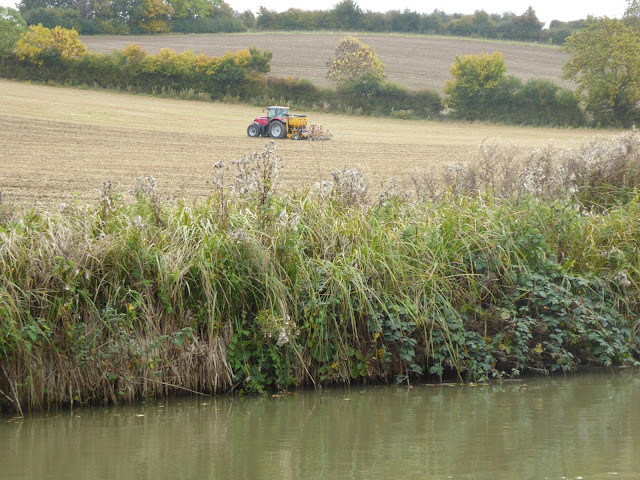 Now then here is a bit of fun poking, at this old farm buildings conversion in Welford it has a public footpath that passes right the way through the centre, on the concrete pathway, we walked through to look at the view on the other side.  So as you can see this larger property on the right hand side is all one home, as we walked alongside it we can see right the way into their lounge kitchen and dining room..... Who would want that? 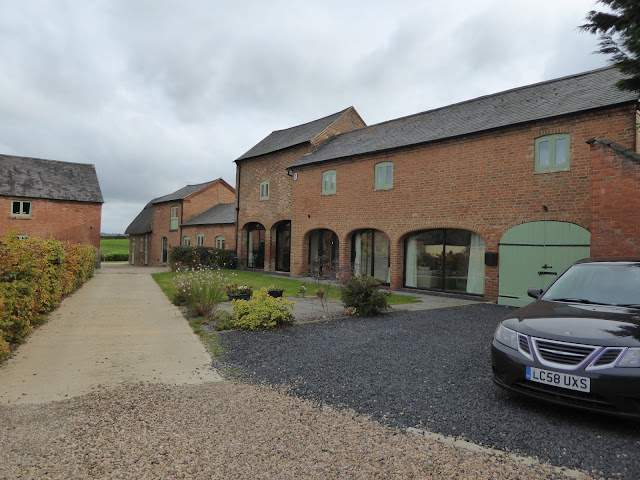 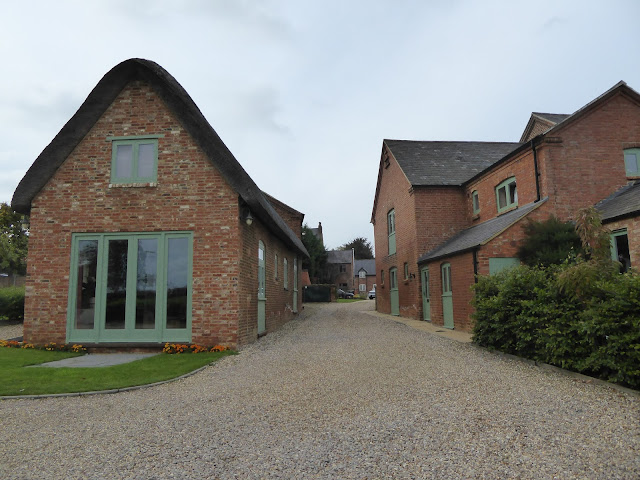 Lunch was haddock and chips (David had mushy peas big yuk).  Rugby was very exciting I think the Aussies will win it.
Posted by Lisa at 19:22 No comments: