A day out playing with trains.

Up early and off on bikes.  We cycled the short distance down to Kinver where the car had previously deposited and then drove to Bewdley, which is on the River Severn and is the second stop on the Severn Valley Steam Railway.  David had cycled to Bewdley on another trip and said I would like it.  I had had to wait to visit it.  It was very lovely, but with car parks out of town, so a quick change of plan, we parked at the  Railway car park and went straight onto the train.

I had forgotten to remember that it was the school holidays, when the first train of the day arrived it was busy, we didn't get a First Class carriage to ourselves, but shared with a family. 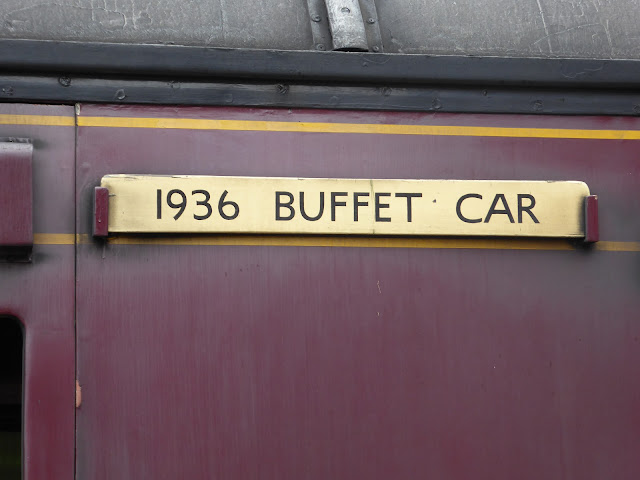 When we arrived at Highly station, we alighted and went to visit the Railway Museum there which was very good.  My favourite was the Royal Coach used by King George IV during the war.  I couldn't get onto a tour of it due to a time restriction, and could only take snaps through the glass windows.  Before was the view of the countryside around Highley. 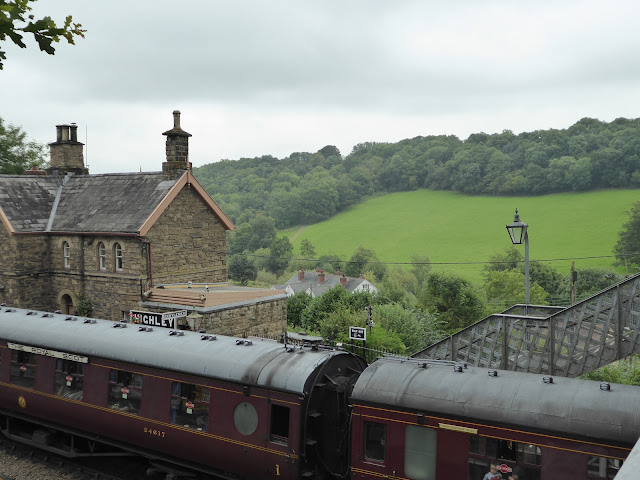 Not identical, but maybe the character of Gordon was based on this engine.  Gordon was haughty and proud.  I am speaking of course of Thomas The Tank Engine and his friends. 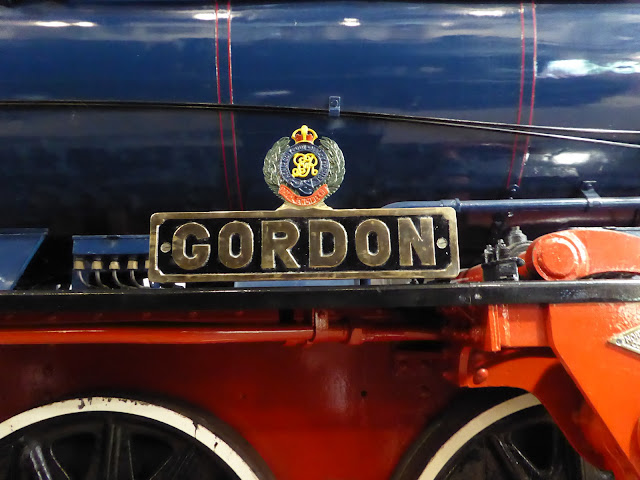 The end of the line for us was Bridgenorth and here are some of the old pretty cottages that line the streets.  Today we only had time to have a quick coffee before returning to the station for a partial return. 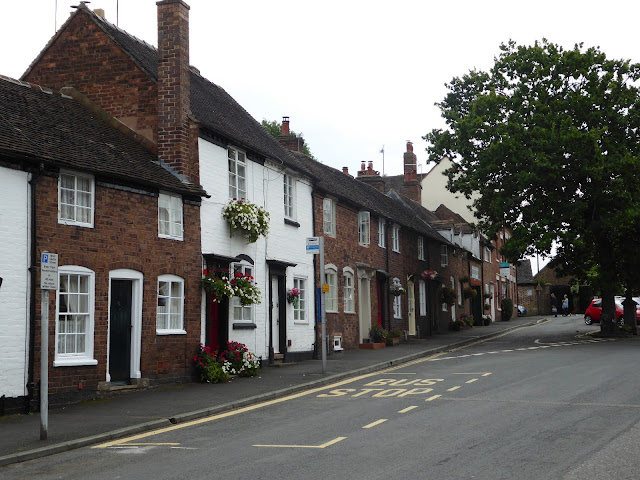 We got off again at Arley, from here its a gentle downhill walk back to Bewdley all along the mighty River Severn.  At the Victoria Bridge we were lucky to see the engine cross over right above our heads... 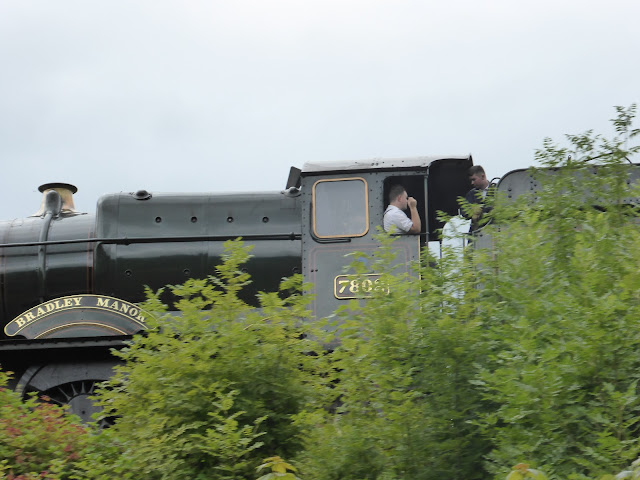 All along this stretch of the Severn were these wee cabins, which I thought this one of the nicest, see the topiary? 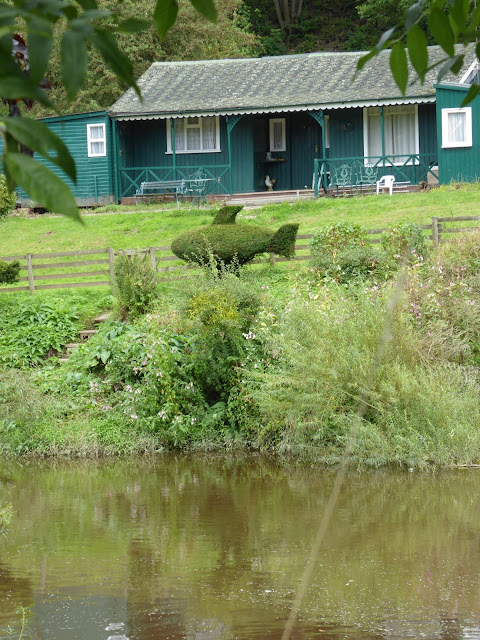 The four miles to Bewdley did seem a bit like six at the end coming into Bewdley from a more boring end of town.  We had tea in a very modern cafe on the High Street, it's an odd town in that there are hardly any shops barring cafes to visit.  A beautiful town full of period buildings, but I won't be retiring here.

On the way home we called into The Lock pub at Wolverley and had wonderful burgers and sweet potato chips, my fav.  Back at the boat later this boat ahead was puffing smoke from presumably wet wood and caused David's wife to grumble when it came down our mushrooms......  I feel a controversy coming on. 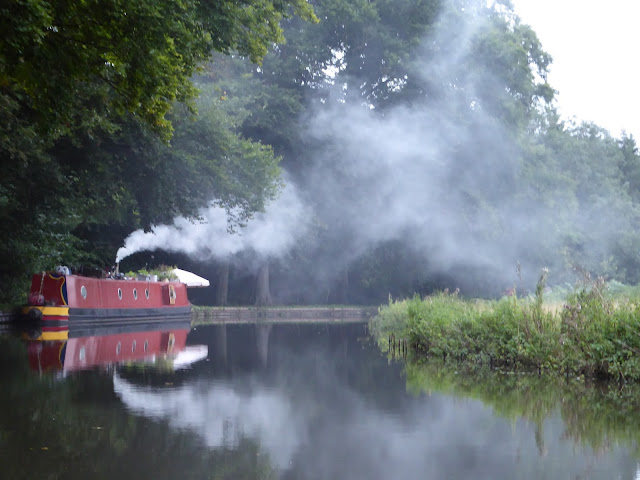 Owls, geese and a heron

So Reader, its been a while, I'm sorry about that but we've had visitors and sitting on your laptop in the evening is not really that social.....
But here I am again.

This view was last night overlooking the cricket ground, I love the way the blue sky remains blue in the water reflection. 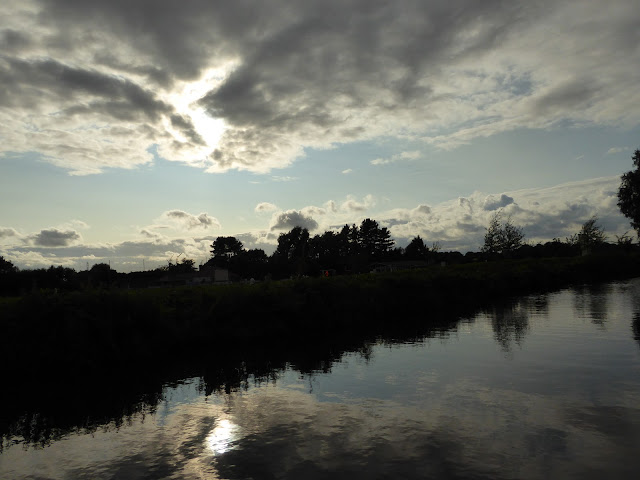 The next day as you can see was lovely and sunny, we wanted to see an bit of the surrounding countryside so we got the bikes out and peddled off.
The  Victorians sure knew how to build beautiful.  I guess they had the benefits of money, available cheap skilled workforce and design.  But oh boy this is "Only" a water pumping station.   From Batch Locks in May I had only been able to see the roof so I was thrilled to see as much of it as this today.  It was fenced off. 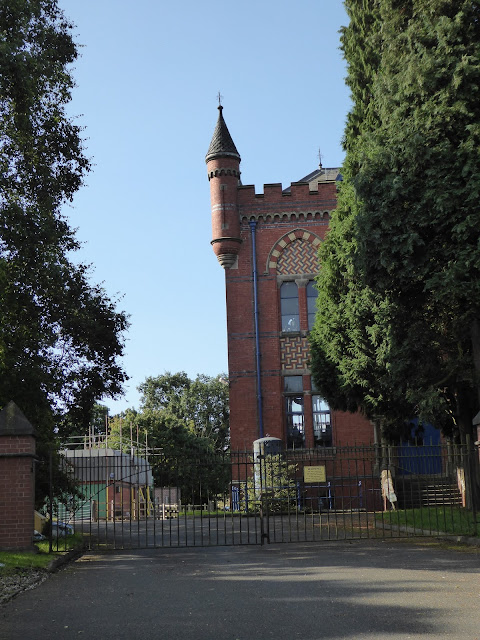 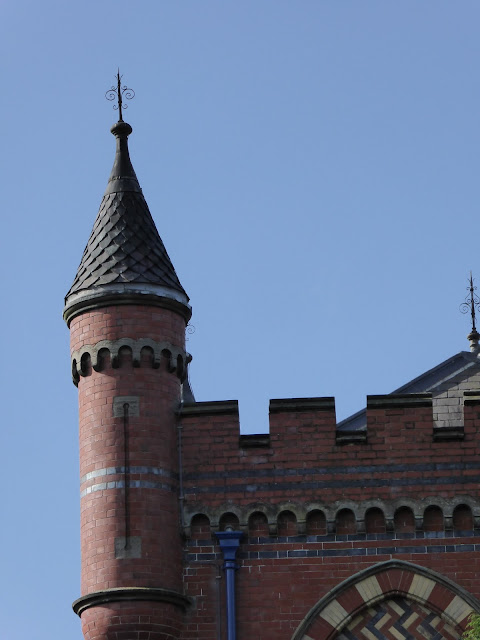 This is the junction of the Staffs to Worcester and the Stourbridge Canal.  We went into Birmingham via this route a few years ago but this year we are taking a different route. 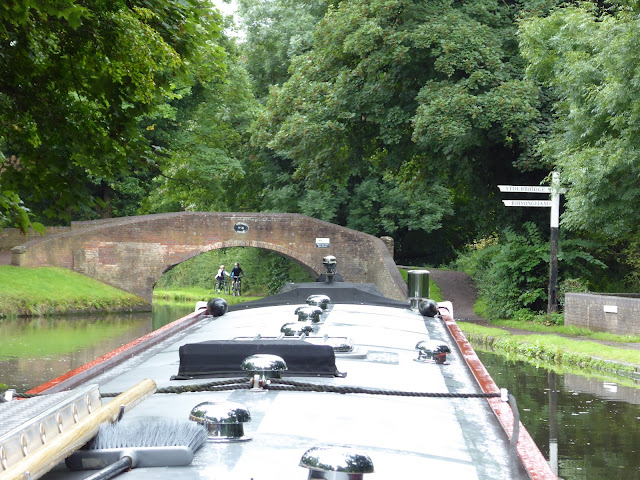 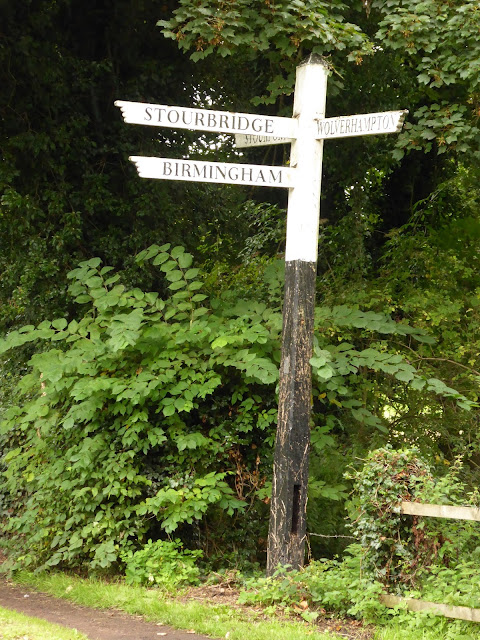 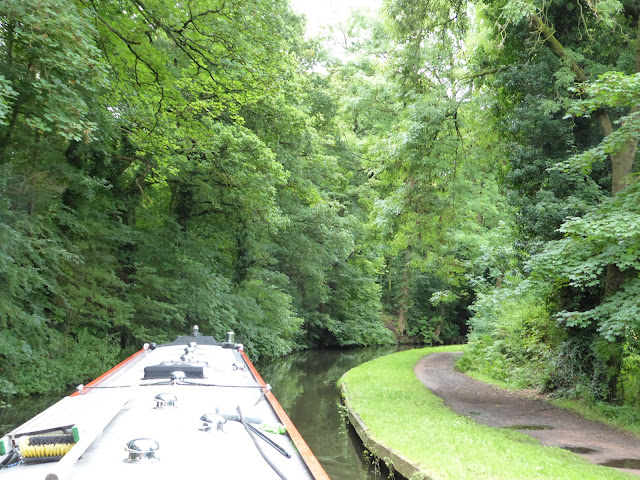 I wanted to get a photo of WaL going into this tunnel, actually less of a tunnel more of a fat bridge, as earlier in the year I took one of WaL emerging from it....

"Well get off then woman.... quicker than that!! Get out the way.  Bloody Hell woman look where the bloody boat is now???"

Oh my god how stunning is this for a mooring?   We had spotted this long bend in May, but of course at the wrong time of day.
We stopped early in the afternoon just enjoying the view.  Later, two walkers stopped by and we all chatted.  Andrew and Julie are looking to move onto a narrowboat to live OR buy a house in France.  We showed them around WaL and they liked the layout we have.  But I said for them to go to a Marina and look at many boats on Brokerage as they are all different.  If you do find this blog both do get in touch and let us know which choice won!! 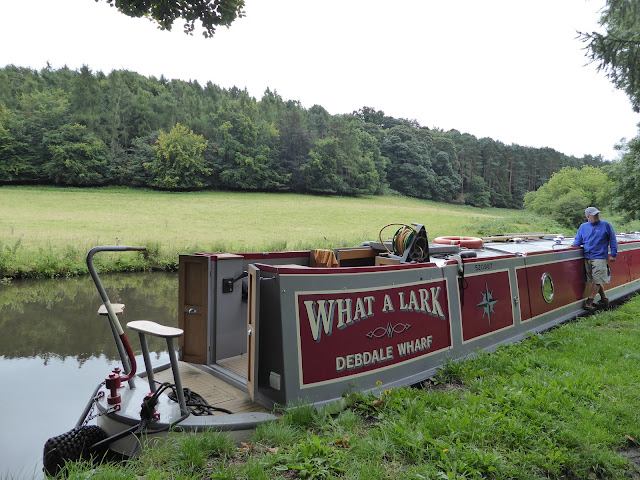 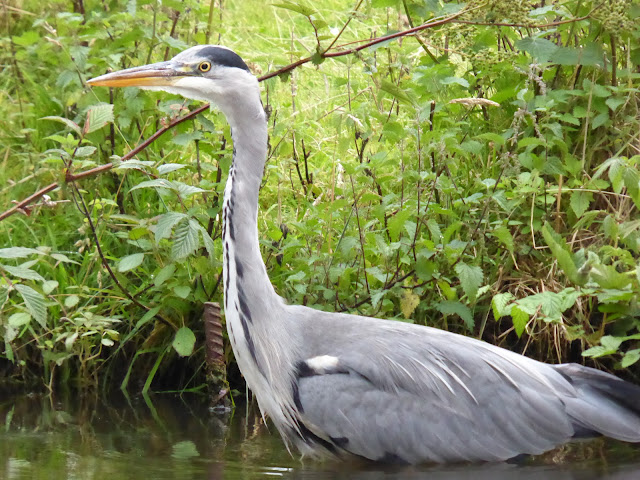 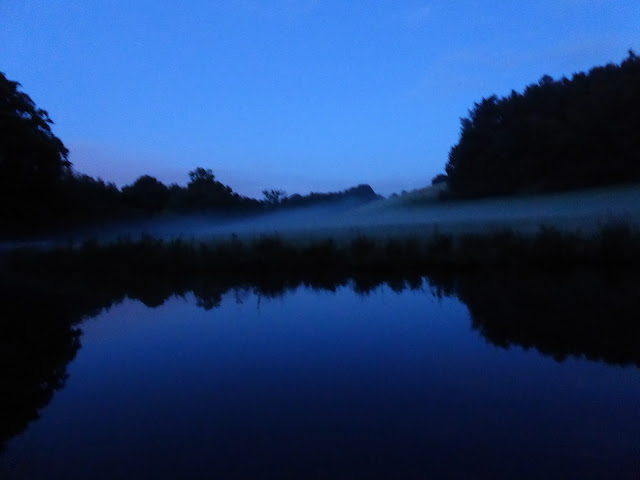 The mist rolled over the meadow and as we sat sipping a glass of we heard a good few owls around talking to each other, heavenly.

I think supper was Kettle Chips.


We had a nice easy uneventful run from Wightwick down this morning.  Here are a few photos along the way.  I love the way simple things change from canal to canal or should I say canal company to canal company.

We arrived much later at Bratch Locks, David had chatted to a passing crew member of another boat and learnt that the cricket pitch was being prepared for play.  He had in mind to watch cricket in the sun from miles back, the sun was the undependable factor in all this.
First glimpse through the shrubs showed  an unpromising score board.  I wondered if the 7th's were playing?
We crept forward as we could see another match playing alongside.  Now back at the end of May when we came up this way, the Bratch Keeper told me that the is a risk with mooring up opposite the cricket ground with balls, they regularly come over......  I imparted this local knowledge to David who declared that he likes a gamble.  It was only when I insisted of being in the cratch and out of range that he relented and moved on another 20ft.

The afternoon passed in a most pleasant manner for me and kept David highly entertained, rain did not stop play but the tea interval did. 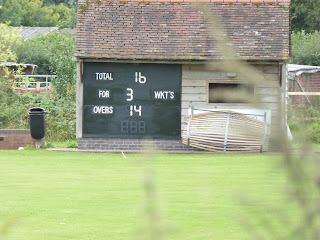 We weren't terribly hungry that day, so supper was homemade mackerel pate, followed by homemade scones I made when David was out the back watching the cricket in his extra thick fleece.

So another of those days when they say "No don't worry at all about the rain, its coming much much later.....".

We left Penkridge and stopped briefly at the service point there as it was empty.  We talk a lot about service points together, David hates stopping, he says I am obsessed with rubbish disposal and we have plenty of water to last till Tuesday week.   I have a slightly differing viewpoint, I like to fill the tanks regularly so I have enough water to wash my clothes and hair on demand, he has no hair and happily would wear the same filthy trousers, he is a farmer don't forget...  So as Penkridge was empty we stopped and I turned a blind ear to his mutterings.

It was one of those days when you spot boaters from a distance, coiling ropes, attaching the tiller arm and banging mooring hooks, then they spot you coming and swear silently to themselves while glaring at you and saying Good Morning through gritted teeth.  I guess most people had heard the forecast, disbelieved it and got moving early, but not quite early enough.

I say all this but there are only about seven locks and we had to turn them too.

Later as we got nearer to Gailey and the top of the pound (To non boaty Readers, this means that you've got to the top of the hill and now its lock free cruising till you go down the other side.  In some cases its many many miles).

So I did the driving today and David went up and did the locks.

Somewhere or other, he went off and instead of emptying the lock signalled to me a boat was coming...  No great shakes but I did pull over and tie up instead of hovering for ten mins.
Nothing happened, besides David and many others watching the boat enter the lock except it didn't....  Well eventually and I mean after an age, the boat crept in, I thought it must have broken down.  It had a large crew, whom all stood staring too at it, I knew that if it had broken down David could do nothing to aid them.

Turns out it was a hire boat with eight ladies of a certain age, I think they might have been Guiders, which is worked with Girl Guides, as I have done in the past.
Not immediately but at considerable length the paddles went slowly up and I thought I could see steam coming out of David's ears from where I was.

This boat had done the Black Country Ring and were heading back to Great Hayward so in the past week had done about 60 locks.... The helm hadn't been proficient enough to get the boat in the lock from the lock landing, hadn't or couldn't get the nose pushed out, then had insisted on not having the paddles raised because the front button of the boat touching the bottom gates.  They finally exited at a worms pace!

About 25 mins later I brought WaL into the lock another crew of the boat behind them asked me if I had enjoyed my sleep as it had been so long.  This boat had had to follow them down three locks and she said they might pull over and have coffee.
Oh how we all laughed....

I disappeared inside at Gailey, to go and do my yoga but I did see the service point occupied ahem!

We toyed with the idea of pulling over, but in the event carried on.  David wanted to get through Wolverhampton.  So it was an easy run, not many boats about and those who were turned off up the Shroppie.

I like the green corridor that is Wolverhampton, the water is very clear and on a previous trip had seen a Kingfisher. 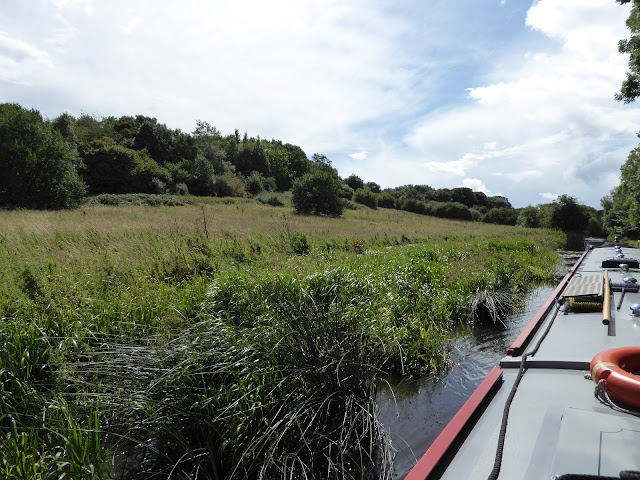 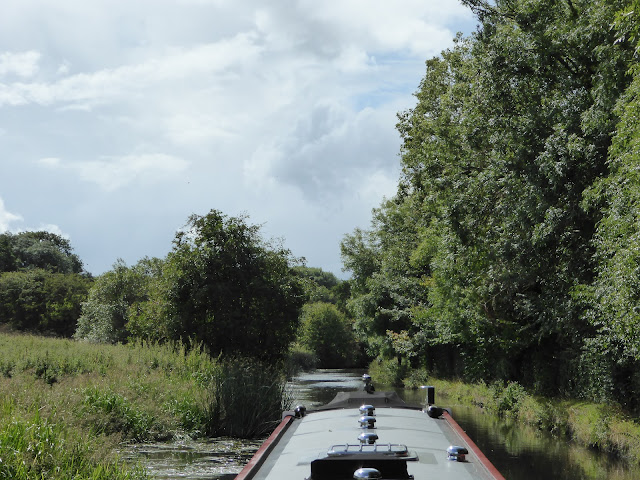 A few more locks then we'll stop at Wightwick (Pronounced Whittock).  But with the sky blackening way earlier than forecast, I suggested stopping at Compton where it was sunny still, no lets do one more lock.....

The last lock had two CART men working on the lock gates owning to an underwater obstruction.....  With much heaving, raking, poking and showing too much 'Builders Bum' finally the gate moved and in we went, the heavens opened and we got drenched, or rather I did as David had already put on his wet weather kit.

Moored up dripping with soaked feet, I felt for the other poor wet boaters as they went past.