Water thief and are we nearly there yet?

I'm all behind like a dogs tail.  I should be packing to go back to WaL but here I am trying to write and being distracted by anything and everything.  Just this second a woodpecker in the garden.
So allow me to do a disjointed recap, a bit like the beginning of an episode of Line of Duty, scenes all out of kilter making you think you missed the last episode.
We were trying to hot foot it home in a relatively short amount of days that had reminded both crews of being in a hire boat (But not as bad),  something both of us had done years ago some days doing ten or eleven hours a day...  The weather was not great but I will include the time we sat out on the tow path, just the one time that is.
Here below is The Globe Pub, I had wanted to stop, on the way down it was chock-a-block with moored boats so not practical and on the way back a gloriously sunny day, what could be nicer but it had not opened yet.
HERE  I thought it was much much older than it actually is, its a bit wonky now, but they believe its about 1800, so just the 221 years old.  It is owned by Green King and has mixed reviews. 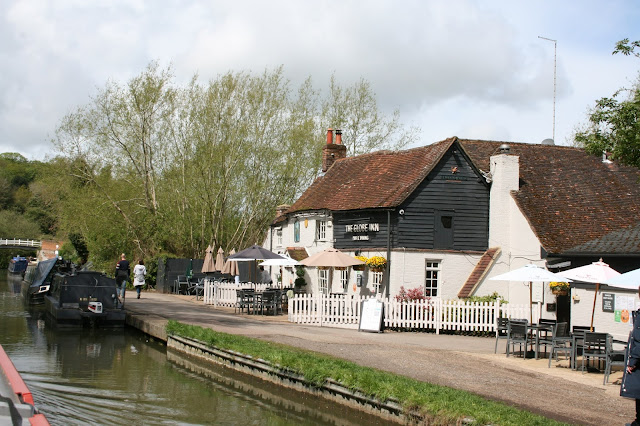 I've included this shot as it is at the top of the Aylesbury Arm, now we were here a few years ago and on this spot was an old BW (British Waterways) yard, they sold it off for these posh houses and actually KEPT the water point right outside these folks lounges.  As you can see with a long boat such as ours you have to tie up immediately outside their windows.
Louise and John went on to prep the next lock and we filled up.
David sat on the back of WaL while we filled and some cheeky local liveaboard from the row of boats opposite came around from the other unseen direction and filled his huge plastic containers that he pulled on a trolley and put the water over to his side away from our hose.  He was screwing up his lids as I approached the tap to check we didn't have a kink in the hose after D looked at our dial and saw how slow it was filling.
WaL was full in a short time afterwards but I have never experienced that before, stealing water , have you Reader?

Bit of a jump here as below my computer has decided to load the photos newest to oldest if you get me,  this below is Blisworth, it was nice and early as we passed by the bedroom of these converted warehouse into apartments right onto the canal, Reader I averted my eyes as we passed by someone making their bed....  I'm not completely in love with the concept of the general public having the ability of gazing into my bedroom. 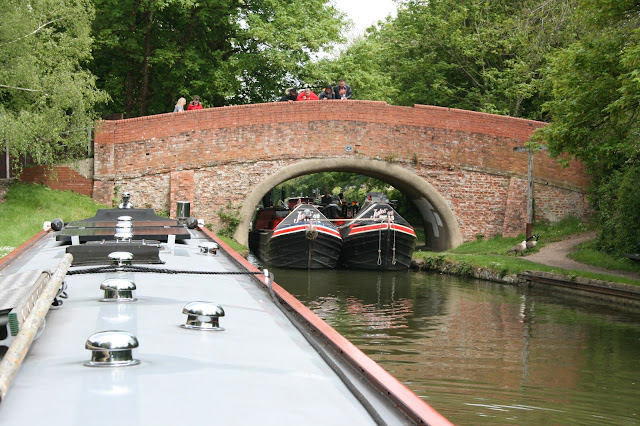 A man older than me who was crewing for a passing boat on the Bucky Flight saw me taking that shot and asked me what was there, I explained to him that I very much love the echo of the history and people who were on the canals, he said to me that he had never taken a single photo in his life and never even owned a camera.
I think we thought each other mad. 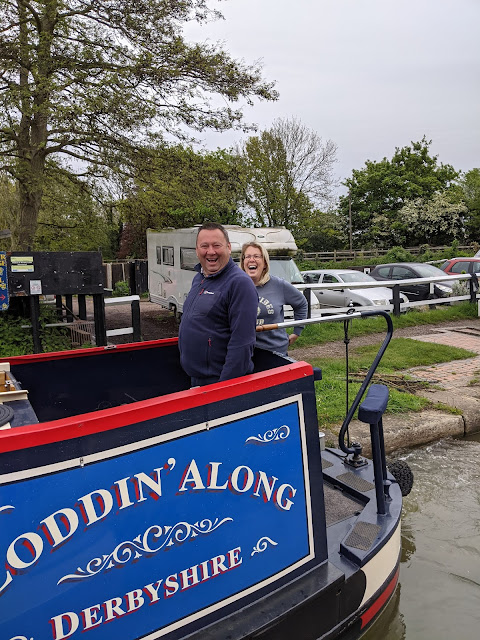 We had the best time with this great couple.  The weather was a bit of a pain but we got used to rain everyday and drip drying our coats, hats and trousers in the respective bathrooms.  A great trip, next time I'll clear my diary first.

Yes put the central heating on please, its only mid May.

The next day was showery just for a change.  It was cold too.  In the afternoon David and I walked to the reservoirs and walked to get some air and exercise, it was perishing cold and we walked fast to get it over with quicker.  Louise sent me a photo of her and John enjoying an outside, socially distanced pint and I swear she was only wearing what looked like a cardigan.  They are hardy northerners though.
We played cards again in the evening and David and I tried to remember how to play Hearts, which is the game I love and we play with our youngest daughter and Mitch whenever we are together.
Tom   HERE  , if you are reading this I do think it is your game called The Bitch!
Anyway, we departed the Wendover Arm the following day as time was pressing.
The following are some assorted photos of part of the journey.  You may have gathered  that I am home now and trying to write this retrospectively which is never a good idea, but bare with me.  Its been a bit full on and I am looking forward to the boat next week and to the return of said daughter Verity and Mitch from NZ from where they have been for almost five months,  enjoyed an Indian summer, no lockdown and family, frankly Reader I am jealous and will be going with her next time whether she likes it or not.  David has been changing the garden, its not complete but at the moment looks a bit like a "Rewilding experiment", when we are home next time I hope it will be, well something and my mother cataract operation went well and lastly we had our grandchildren here which was heavenly but it seems I might be lacking some stamina from when my own babies were bowling around the place over 35 years ago..... 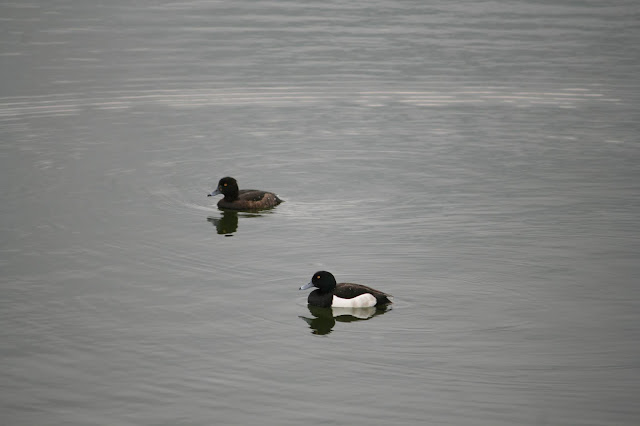 Anyone know this duck above?  I took it to be a pair of Scaup Ducks  HERE please correct me if you know. 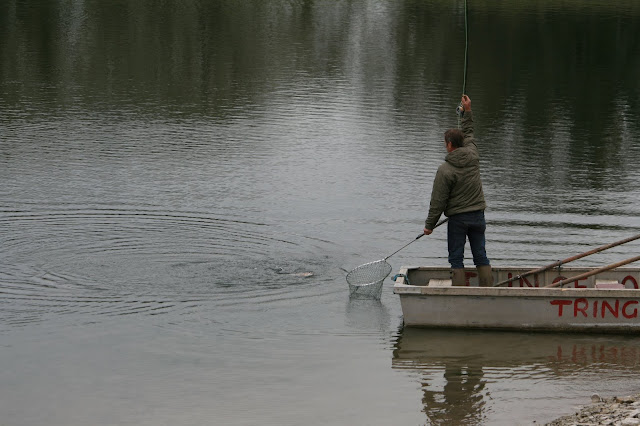 Now these next few pictures are of the Wendover Arm restoration, now back in 2015 we were here with the Lovely Joe and Lesley   HERE  we'd had a big trip together that summer going across The Wash, The River Nene, the Grand Union and later the Thames, The River Wey and up the South Oxford, BUT if you peep at that link you will see that from the photos that not a lot has changed from the wee basin , but there are piles of materials ready to be utilised.  In fact one of the volunteer Lockkies said it was almost ready to put the water in, this I would doubt but I will be sending the restoration society a donation. 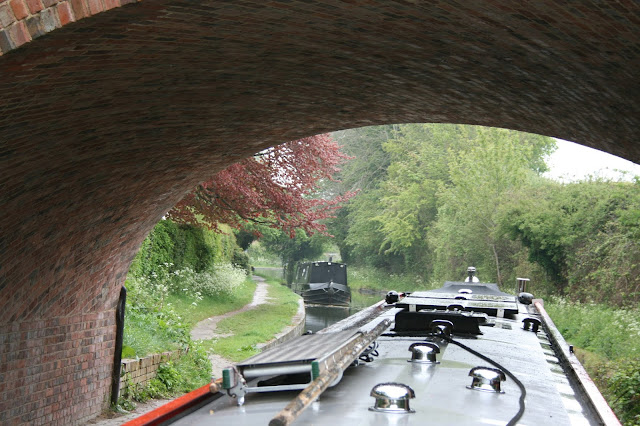 Thw four of us were optimistic of help again on the Marsworth Flight, then we thought we were a bit early, but it seems that volunteers don't work on the weekends here especially if its raining....
Pity but it is the most attractive flight looking over the reservoirs.
These few are published by kind permission of Louise, I don't think I had my camera out again because of the rain. 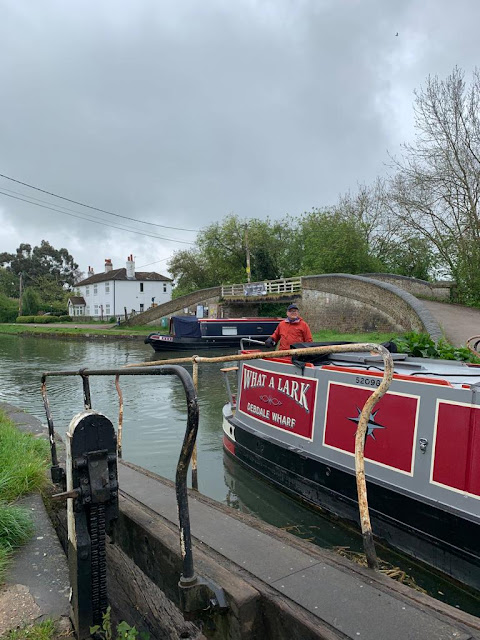 Well that's it for just now.  I will endeavour to post again before we start our next trip....
Posted by Lisa at 12:07 5 comments:

Rain and the part it played on The Grand Union.

So I know its been a while but the evenings, when I usually blog have been filled with partying, snacks and card games.
Did I say that Louise and John are card players, ( pretty sharp ones too) I can't quite remember how the subject came up but within a night or two suppers were early and cleared away double quick and Louise was at the table shuffling like an employee at Casino Royale.
If ever there is something which makes a not very good card player (me) nervous it's a shuffler like Louise.
So blogging has taken a back seat.  Rain and wind took the front seat  on this little Sojourn.  I can't say that it rained everyday, it just felt like it.
If Pauline from NB Waterlily is reading this, Pauline I took your advice and brought the slip-on waterproof trainers, the ones that look like they are made of fabric and guess what?
My feet stayed dry!  The next day and for the next downpour I put on my waterproof walking boots, these were only £25 on Amazon back in 2012 and guess what? They are no longer waterproof at all.
The next day I put on my wellies for that day's downpour and my feet were sweaty but not from the rain.
Moral of the story is don't go boating in the rain.
When I say that actually it was us who were under time pressure this trip.  Mostly I hate deadlines and rile against them but on this occasion we are going home to look after beloved grandson Luca and to take my mum to have a cataract done.  I digress.
The next morning the day was sunny and fair.  Such a bonus to be in sunshine when its getting on for June and I'm still in three layers of thermals, fleeces and long woolly socks and that's to go to bed in.

The trip continued with fairly longish days, longish days for us that is interspersed with showers, some avoided and some not, but to get to the Wendover Arm in time to get back in time we did have to do the hours.  This was helped by the first week meeting hardly any boats at all, a few hire boats out from Braunston and Leighton Buzzard but really hardly any.

Fenny Stratford.  When we arrived here there was a boat already in the lock, so I didn't notice immediately that that white structure behind the boats here was actually a bridge that goes over the canal here.  The white cottages opposite the pub have no other road access! 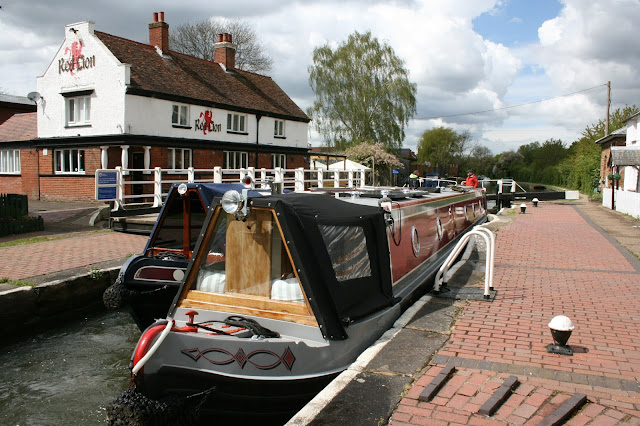 I have done a bit of a precis here as you might have guessed     with photos illustrating the things we saw.  Some boaters may well see that some of the photos are out of order, but that's pandemics for you.  I blame everything on that.
The next day to this we approached The Marsworth Flight.  As we arrived there were three volunteer Lockkies on here.  Two worked the gates and two more walked on up the locks to prepare the next ones.
One lovely chap actually went to the same school as David, he hated that school as much as David did!
It was drizzling when we arrived and continued to ending all chance of photographs.
The day ended up in a complete cloud burst as we turned onto the Wendover Arm.  I had been warm up till then but during that 1.5 miles of the Arm I froze, pretty sure the others did too.  We four were wet through, cold tired and emotional. Hot showers all round.  The boat was full of dripping wet clothing, I mean, what could be nicer?
I can't remember what we had for supper but it was hot.