Kinver to Bratch in the wonderful sunshine.

Mallory and I were the first ones in shoes today so reported for duty.... and would you just look at the weather? 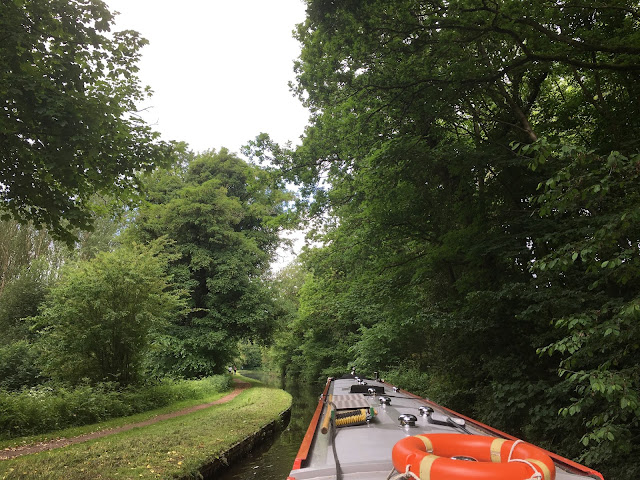 The forecast was all over the place today, it had been forecast that it would be sunny in the morning and clouding over, chance of rain.  Well we had a way to go today and tomorrow (For us anyway) to get the car and then consequently to their return train station.  So as it was rain tomorrow we carried on like normal boaters to enjoy doing the locks in the sun. 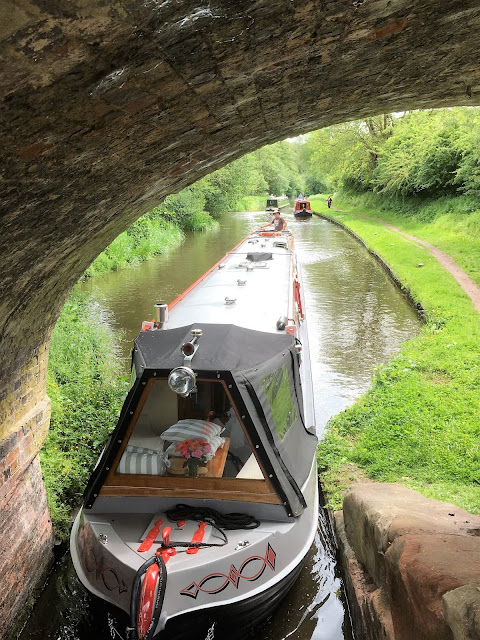 Now I hadn't been counting but an awful lot of boats had passed us, heading south.  The lady crew on the boat behind us here said it was 19, it worked swimmingly at locks of course for all concerned, but it was more boats than we had seen since April.
Turned out it was the Wolverhampton Boat Club having a Rally at Stourport, I am not completely sure where they were all going to put themselves in Stourport but I hope great fun was had by all.

Rather a wonderful garden on the off side, I saw a chap with a cap and a wheelbarrow, maybe a gardner, maybe the owner.  I do love gardens but Hells Bells you'd be a slave to this one.  Think I prefer boating and visiting them. 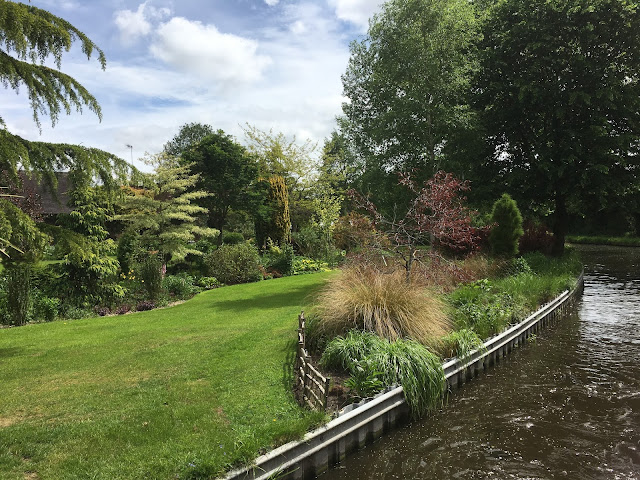 Now I can't remember exactly where this lock cottage was, I really really hope it is Graded, Listed or in the very least has a Preservation Order on it, because it does look in need of some restoration.  See the beautiful windows? 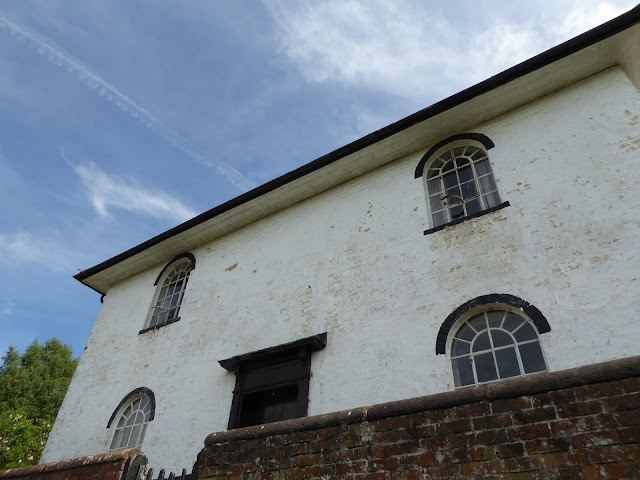 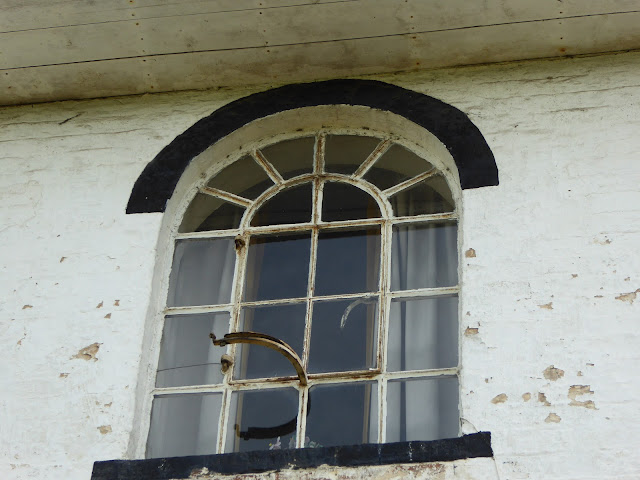 Finally onto Bratch Locks.  These locks look like a staircase flight but in reality they are ordinary locks but separated by a very short space.  Later to speed up the journey from Staffordshire to the docks at Worcester, they amended the locks with side pounds and other things   HERE
We were lucky and went straight into the bottom chamber. 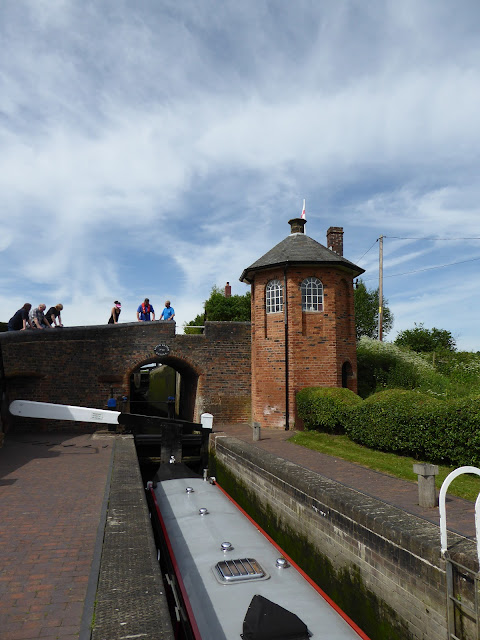 I chatted to the lock Keeper, asking if it had been a busy weekend, yes he said 33 boats came down yesterday from the Boat Club!!
Blimey if they were all from the Boat Club, wherever are they all going to moor in Stourport! He had notified the reservoir and they were pumping plenty of water down.

We moored up above the locks here at Bratch.  Or rather tried to, no rings on a wonderful bit of straight but I suppose the in the summer its where all the boats queue, so a friendly chap suggested we go just around the corner, which we did.  Don't go opposite the cricket pitch as they have big hitters playing in the team and the lock keeper fished a cricket ball out of the canal the other day, it could get yer boat window, but don't go too far as there's a dogs home and they all bark at tea time and breakfast!

So a fab mooring in the sun for the evening, G&T's all round and Verity cooked Thai Green Curry for supper with lemon cheesecake.

So I should have put these pictures up last night of the rocky sandstone outcrops, these occur on the short run up from Stourport to Kidderminster.  I felt that we were boating in the Dordogne. 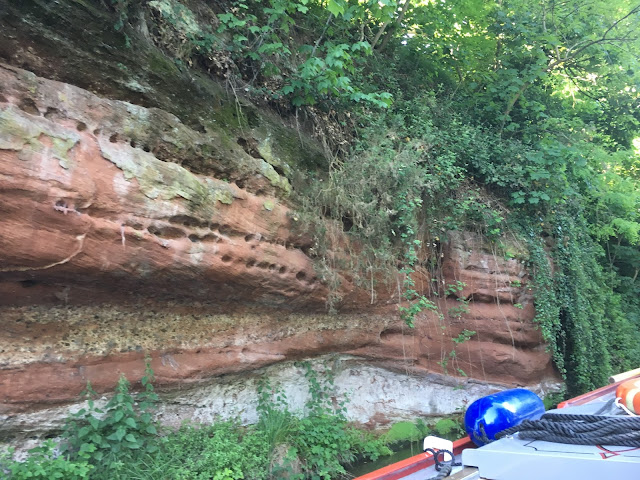 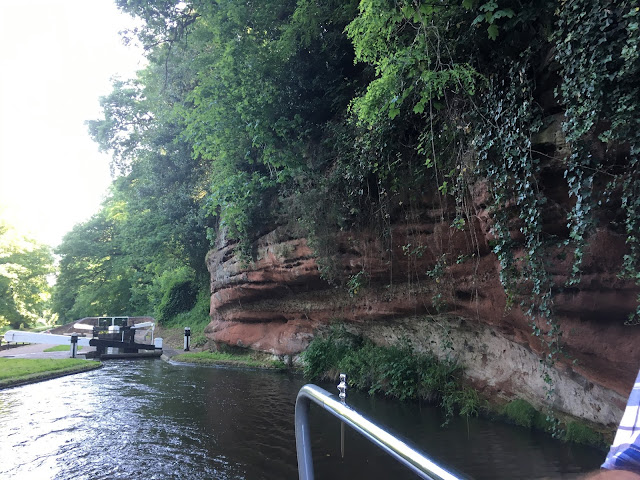 So the next morning we set off with the darling girls.  Mallory is from NZ and was filming a few bits to send to home Down Under on SnapChat....


This is the worst of the blind bends at the lower section on the Staffs to Worcester, I was driving and I was going uber slowly I can tell you. 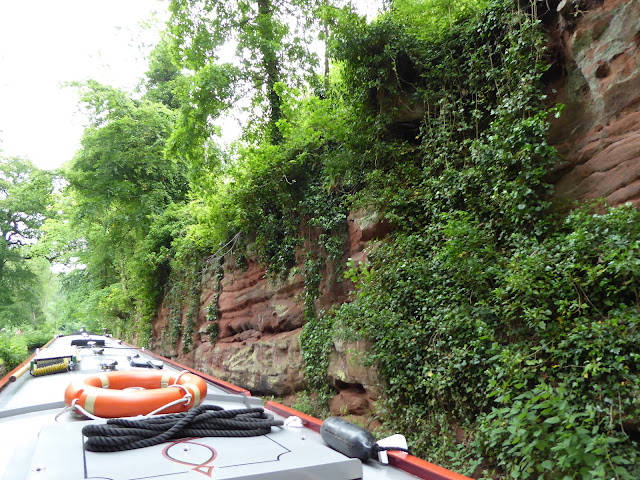 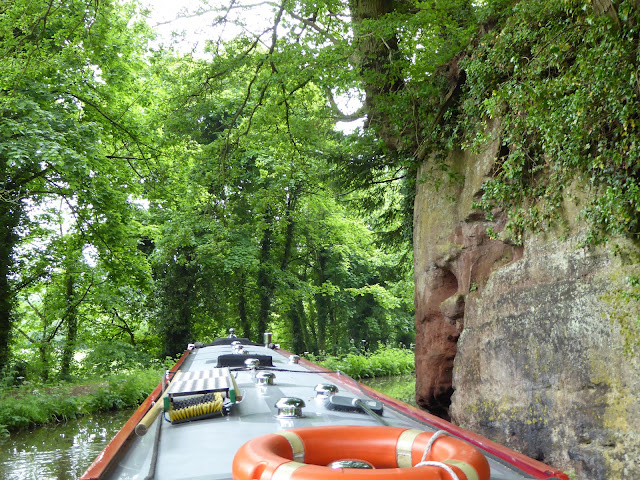 David brought WaL into Debdale Lock, this is the one with the cave cut into the wall alongside the lock, its fascinating, but I am not sure that I go along with the idea of horses being kept in here overnight.....  Some dogs can't get over the lock gates let alone horses. 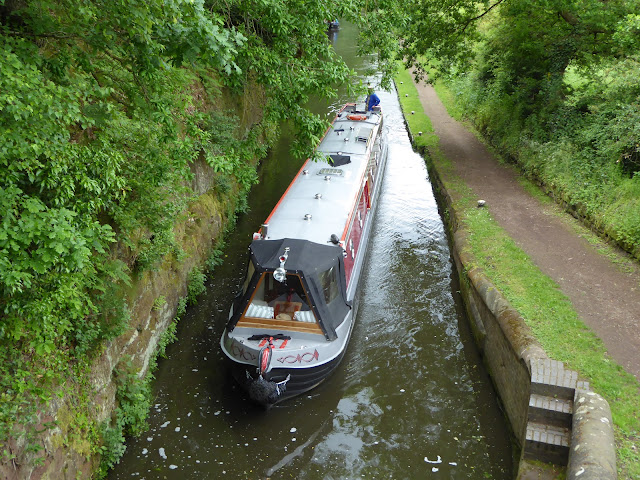 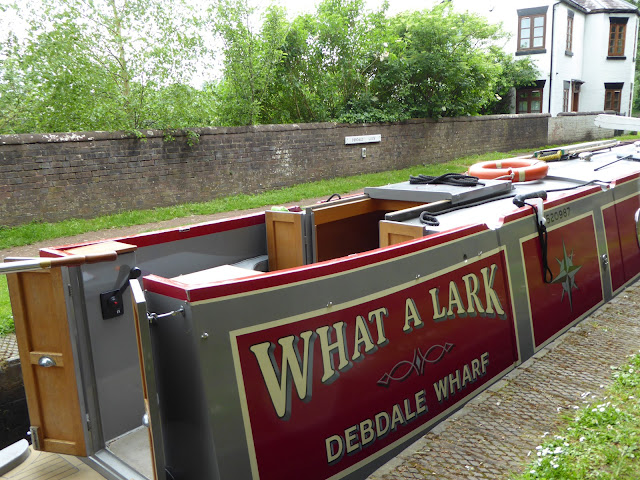 In the afternoon, seeing as how the car was already, as if by magic, in Kinver, I suggested that a thrilling afternoon would be to go En Famille to the cave houses.  David instantly said he needed a nap, Verity didn't really answer but said ummmmmmmmmm.  So in the end Mallory and I went, she is toooo polite to say no.  But she did convince me that as a primary school teacher having taught her children about cave dwellers, it would be a first to actually go see some.

At one time there were eleven houses, as familir=es increased in size they carved another room out of the rock.  The residents had vegetable gardens and kept animals here.  The last occupiers left in the 1960's!!!!!!

Great having the car for outings.  Supper was cold beef salad with sweet potato wedges, with almond and raspberry tart.

So we had the best journey ever from home up to Stourport, best ever.  It was the Friday before the Bank Holiday Weekend and we were kind of dreading it, or rather dreading the traffic on the M25.
But....  It was a dream, my theory is that working folk take the Friday and maybe the Tueday too thus making a wonderfully long weekend, but not too long at home with the children, my theory.

So we arrived at Stourport we no idea how to find the marina entrance by car, a one way system didn't help anyone's mood, then with me disagreeing internally with the go down there command, we found ourselves at the back of some posh flats, which over look the basin, its a private road and has a walkway unlocked into the basin for Live-aboards.  Result.

Unloaded very quickly and enjoying the warm sunshine, the lovely Pauline who resides here warned that the nine hire boats would all be on their way out all going the same way as us if we didn't watch it.
Bish Bash Bosh, engine on and away.  We had filled up with fuel and had a pump-out on arriving a week ago but the hose wouldn't quite fit so over to the Service Point on the other side of the basin.... who was there but NB Cleddau  HERE         whom we had met two weeks previously in Tewkesbury, they had had a good time in Gloucester and beyond and now heading north same as us.
After some Toilet Talk  (non boaters, us lot always talk toilets, no one is bashful), the Cleddau's has a composting toilet and are delighted with it........  We have a flushing loo, however never a day goes past when I don't dread the day it blocks, all boating toilets block or have other issues, or though maybe NOT composting toilets  (We have an emergency 'Bucket 'n Chuckit'  in a box in a cupboard).
Enough!

We parted separately, the Cleddau's mooring up for the day on the canal above the basin, having already done a long river trip and we made haste for Kidderminster where we were taking delivery of a daughter and her cousin-in-law Mallory from NZ for the weekend.

They arrived on time.  David picked them up in the car and left it overnight in Tesco's.  Another good Result, Tesco's new-ish car parking computerised system had broken down, so the kind Ryan on the Customer Service Desk said we could park overnight, otherwise now the brutes make you buy shopping over £5 if you are longer than 2 hours, if you fail to do that then its a £60 fine.

Vote me in as President and I shall have free parking at all shops.

Supper was steamed salmon, salad and a quinoa I rustled up.  I insist its called Quin-noa.
Not a single photo was taken today, frankly that's a record.

Well those among you that having been left bereft from the delay of this posting, I apologise. But we are now home for a short time.
We took the boat up to Stourport in the morning. 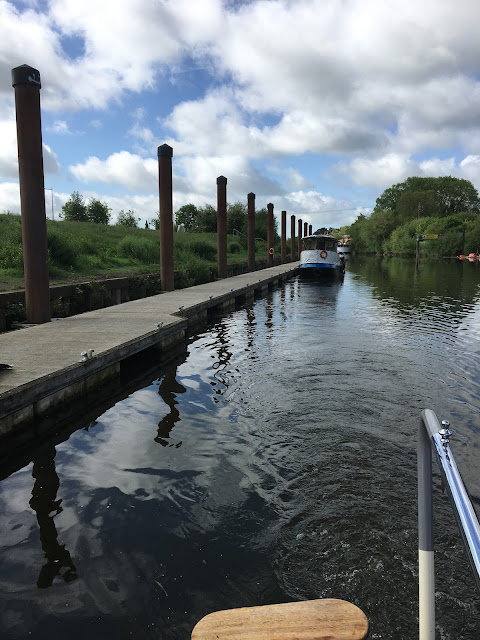 So these are the visitor moorings a stones throw from the lock.  Other boats whizzed past these presumably to go to the more central ones in the town.  More about those later.  No time limit was on the signage here, that Dutch bargy boat behind us had been here for ten days.
The Cathedral had been our view during our short time here.
Pretty sweet eh? 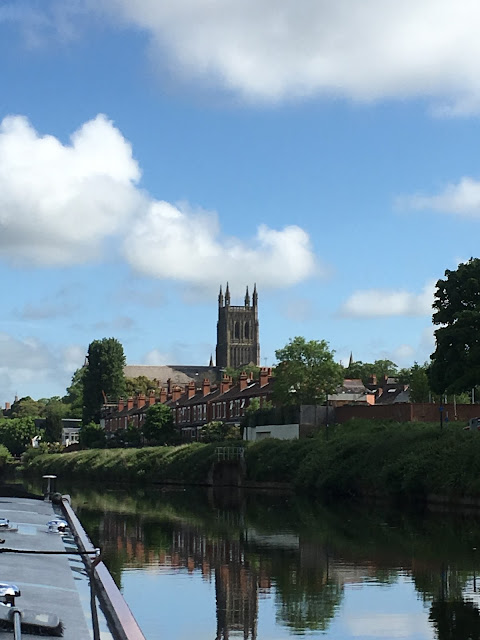 This below is the Diglis Hotel.  My what a beautiful building.  I am told that the food is ok, but the service is terribly slow, patrons buy two rounds of drinks at one time to save queuing a second time, but what a grand garden overlooking the river. 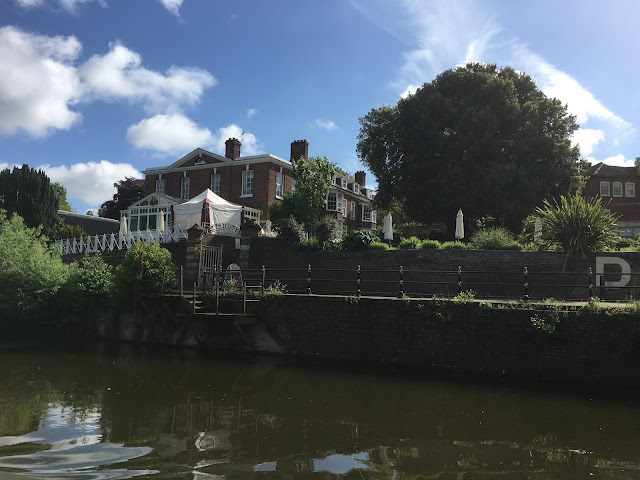 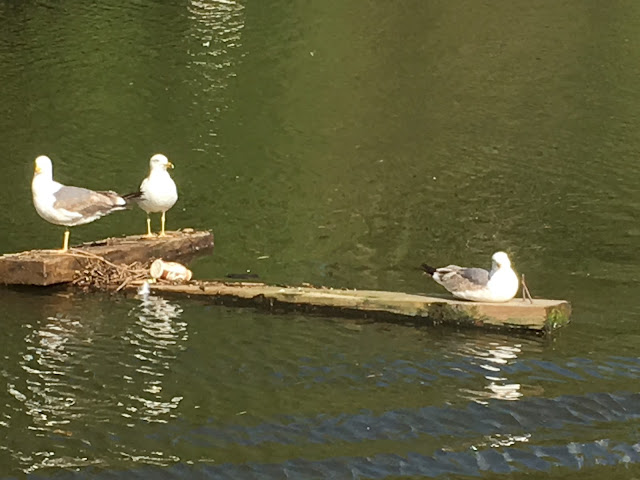 So here ar ethe other visitor moorings.  From what we see there didn't appear to be wood or rubber, on concrete and could probably do with a few more bollards or rings.  We'll not bother with these ones by choice, plus you have to pay. 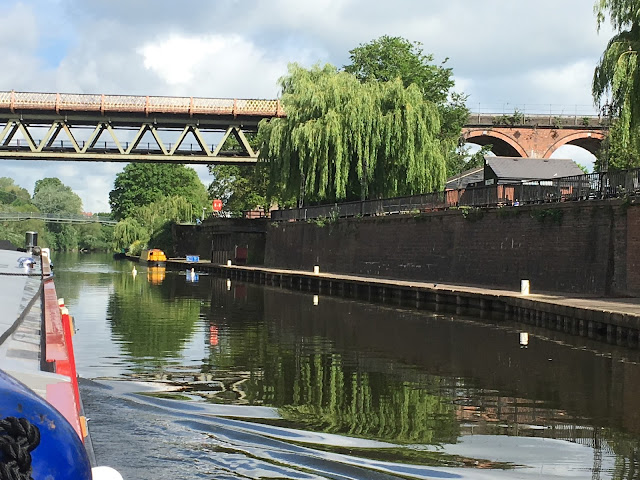 Out of the centre of Worcester and these are some sensibly built houses.  We saw many that seemed lower down than the river bank on the opposite side.
Could be problematic me thinks. 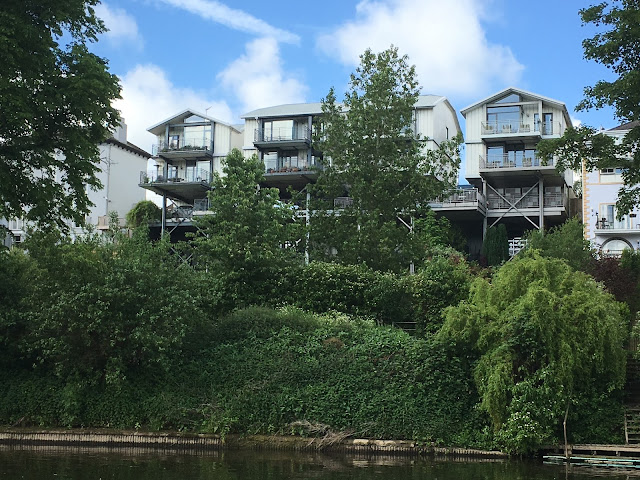 Just the three locks to do today.  The gates took ages to open here....

On the gates of the other two locks top gates, were nesting wagtails, the Grey Wagtails were faster than this Pied Wagtail   HERE  he was taking the morning air for a few seconds so I could get this shot.
The Greys were like grease lightening. 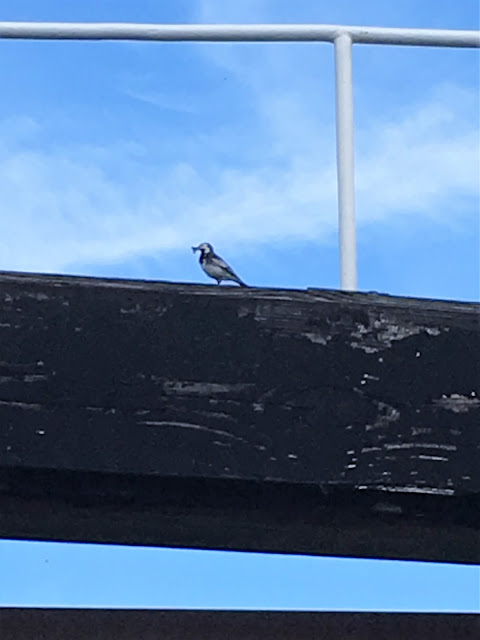 Pretty good photo of a memory for me.  No houses, no people, no roads or paths, no other boats.....  Just fabulous. 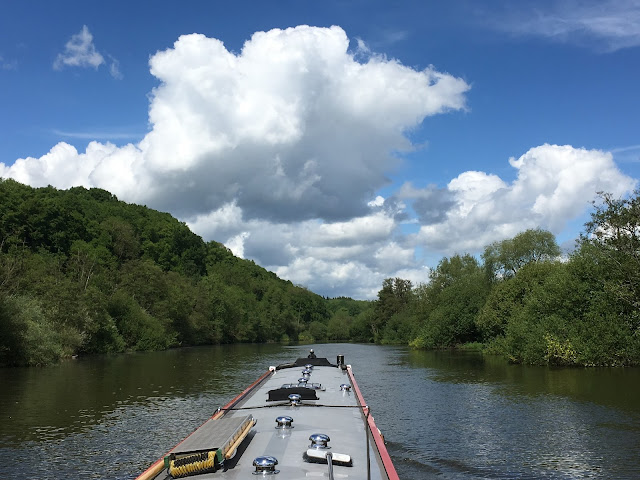 So to get up from the river into the basin there are two sets of staircase locks, or four locks joined together in pairs.


Landed and nesting.  Leckkie on and we'll see you soon WaL.