Now for the Boaters among you, what do you perceive is the etiquette in arriving at a flight of several locks, mooring up on the water points, emptying the elsan, rubbish filling with water and then expecting to keep your place in the queue whilst other boats are arriving?
This happened here with the first boat that morning arriving and doing all the above and then them having faces as long as yer door and muttering about how there was no one here when they arrived and now 4 boats were in front of them.

Now here Reader I confess to smirking.  I hold the view that you are either servicing the boat or queuing....  I as the crew jump off and take rubbish with me but not stopping WaL.
What say you?


A disappointing stop in Penkridge this time.  We really wanted to try out The Boat Inn, as on the way through we discovered too late that it had been taken over, so this time we were properly hungry.  Kitchen closed tonight!  So on we walked past The Star where we had not enjoyed a very average meal to The Littleton Arms HERE, so as we had time to kill until they started to serve dinner, we sat in the hot sun, in their garden terrace watching the people and very very much enjoying triple cooked chips.  We had supper too but frankly I can only remember the chips.  David has read this and says that the Littleton Arms has suffered a disservice at my pen, he says it was a lovely afternoon, we shared whitebait and those chips as a starter, then had a butternut curry which he reminded me was delicious.  So at his behest I have now added in these details.

The next day a sunny flit down to Tixal Wide.

Not far from Great Hayward were these two.  NB Brighton and Nuneaton, they were on their way somewhere to pick up a load of something.... I would tell you more but I couldn't hear what the man said, bit of a grumpy face too.  Why do these vintage boats like mooring on bridge holes?  Two years ago when we were the on the South Oxford, we had just moored up and sat down when these two came past and pulled out both of our pins....  mutterings under his breath from David. 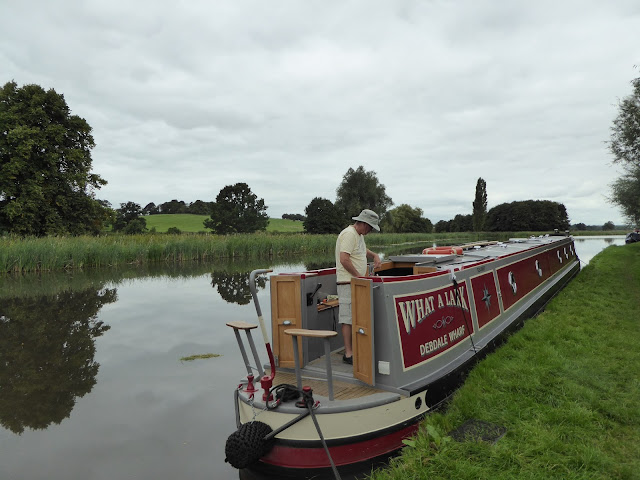 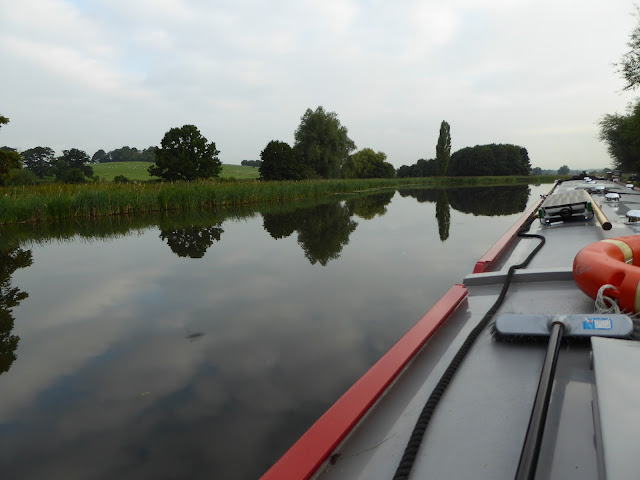 Finally arrived here.  We have always passed through Tixall Wide never stopping.  David wanted to moor up before but I wanted to get here and so glad I did as it was lovely and quiet.

Next morning we pottered off and saw that although there was plenty of space when we arrived in the afternoon, there weren't any spaces left.  The water was like a mill pond.

Below you can see Tixall Gatehouse  HERE  and here you can book it!! 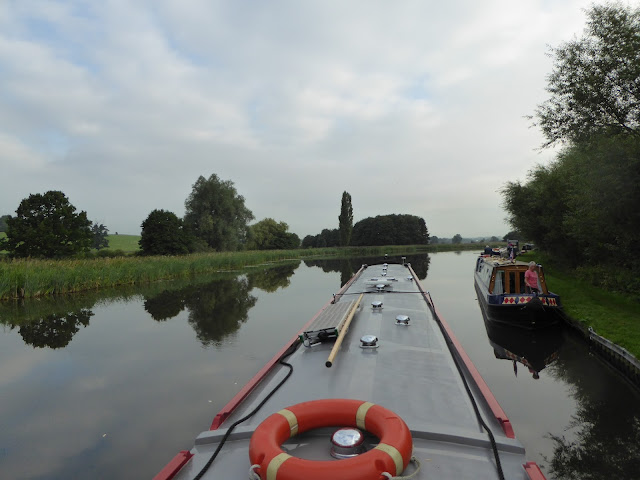 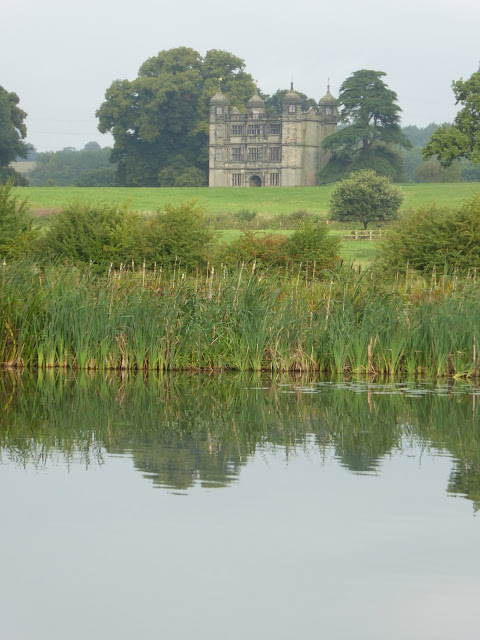 I did the lock here at Great Haywood and I was getting into the swing of it too after the entire summer.  Just in time to put the boat to bed for the year, hahahaha

Shrugborough Hall and moreover the National Trust have not endeared themselves to the locals here by effectively closing down the football club.  HERE.
Its a tough one but the estate they say is losing £1 million a year.  Can't see how closing the only local football pitch is going to save much money and farming is certainly not going to stem that financial flow... a great pity really.

All of a sudden here was someone we knew, Sharon and Richard form NB Oakapple, but as there were boats coming just a waved greeting.  See you both for longer next time. 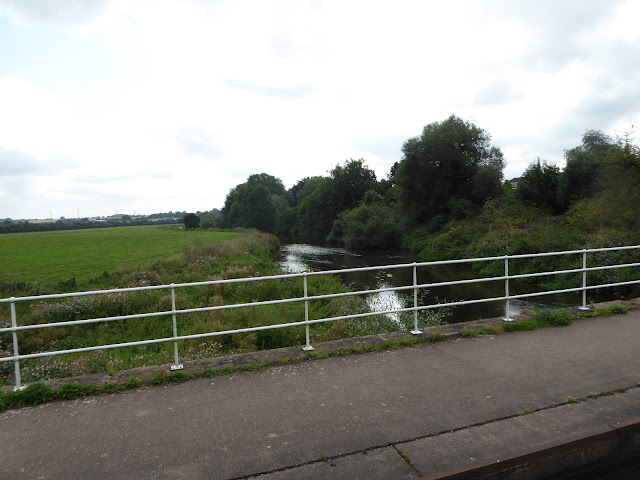 So WaL goes into the marina here for the next three weeks whilst our presence is needed at home.  When we return and move WaL back to Debdale, she will need washing, polishing and dusting.
I have convinced David that Lincoln is nearer to Debdale than home so we should pop north on our way south.
I am very excited as I LOVED Lincoln almost as much as I loved Chester.

So they've gone and its just us two again.

Going from having five onboard to just the two of us is an odd sensation.  The boat almost feels too big, after not being able to move for falling over a holdall and bedding.
On the plus side, Lots of hard work done for us and all the washing-up has been done as Mitch is a compulsive housework doer!
The last of the locks to do today at Tyrley. 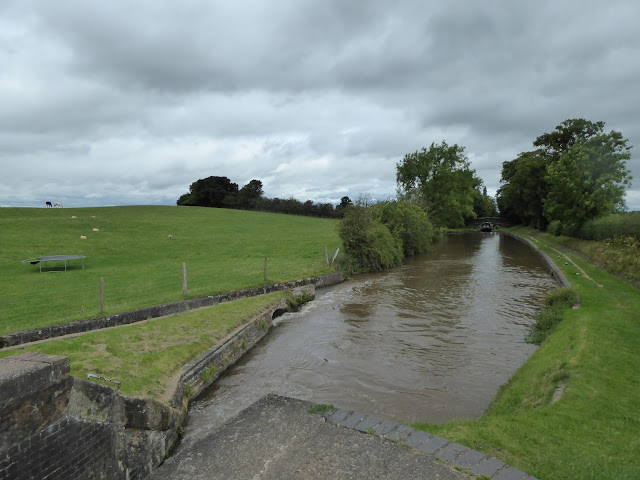 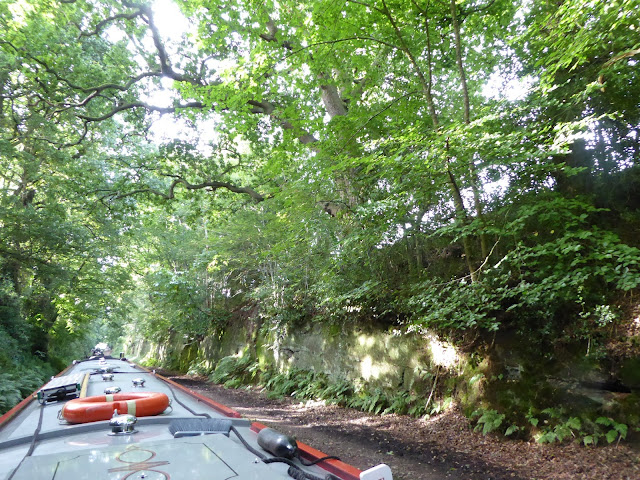 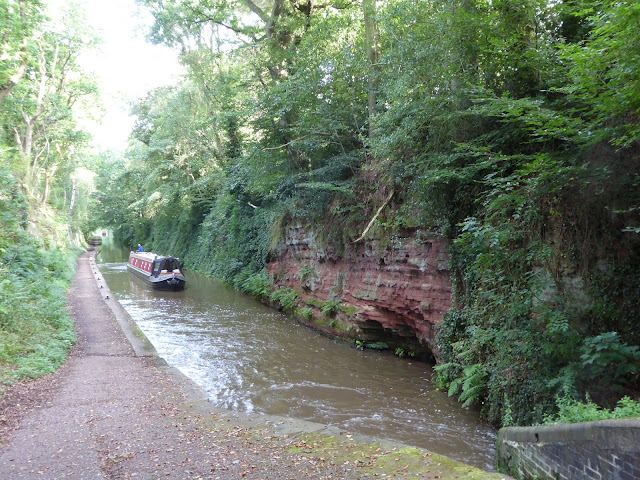 This is the pound above was where NB Constance warned us about the rocks in it and its shallowness all those months ago on our way up.
Today we returned the compliment and passed the information on to nice hirers behind us.
As you can see from the photo below there were a handful of boats following us up the locks. 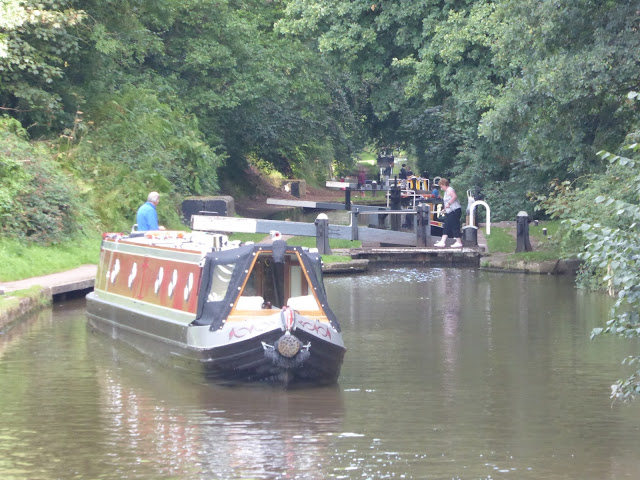 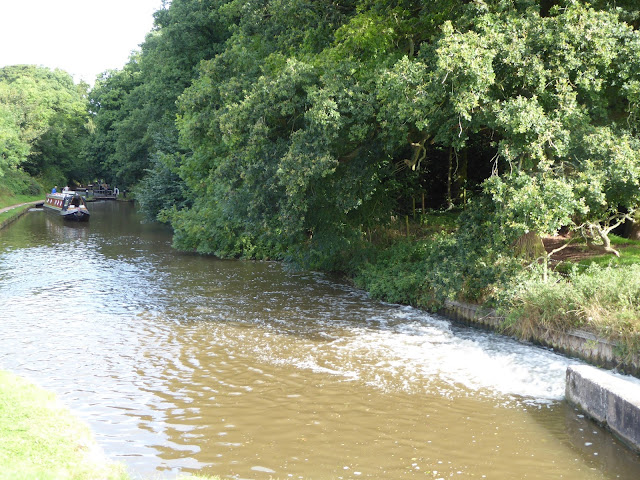 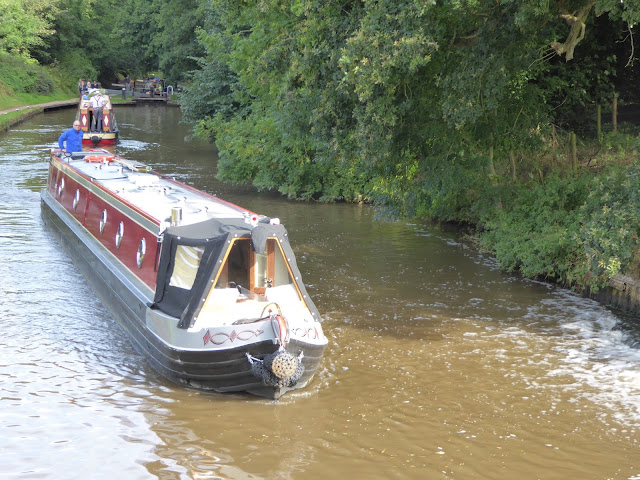 One coming down assured us that these by washes were "Nothing" and "Very quiet" today, indeed they had passed by them in them in wet times and the water gushes out of the top!!!!!  Your boat is pushed onto the "Rocks" in places and people had been stuck before...... gulp.  No such events today, we made good progress following one boat.
The captain made no effort though to help his crew wife, shutting paddles etc on one side which not only do I deplore, but it does make the whole process slower and we caught them up.  On the penultimate lock at Tyrley, however I was just about to open the bottom paddles to empty it for us to use when a volunteer was making great haste towards me on the tow path...  "Leave the gates open, there's a boat coming down!"
I questioned this as I had only just seen the gate close as the slower boat had entered it....
"Yes there is a whole queue of boats coming down"
Now Reader I am by nature a most obedient lady who always does as she is bid however on this occasion I did put it to her that
a)  The previous boat had held us up all along.
b)  The lock in front had not even started to empty yet.
c)  There are a queue of boats behind us all waiting too.
d)  There is certainly NO shortage of water on these locks today.

Did I do wrong?  She said "I can only advise not order" and ran on past. I did feel guilty as I normally always comply, however David and I were confident that we could whizz though without causing mayhem and so we proceeded.
Bish Bash Bosh and there we were finished and waiting below the top lock gates still for this boat to appear......

They finally did and I even opened the gates for them with another boats crew....  Turned out that their dog had ran off as they were wanting to empty the lock and the crew fetched the dog back before working the lock...  So that's alright then. Guilt all gone. 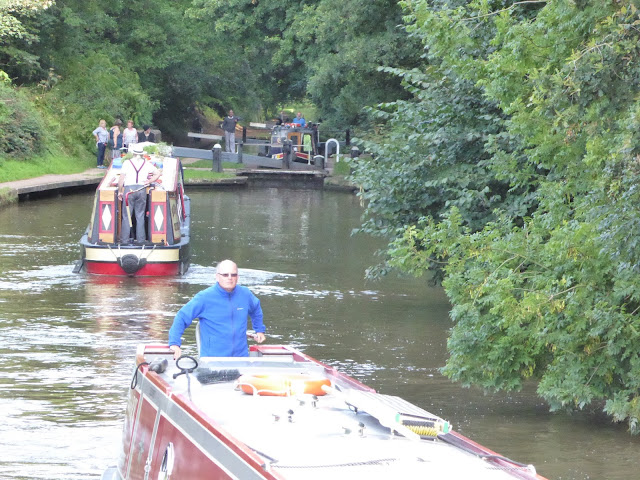 We could have watered up here but yes there was a queue of boats waiting and huffing at the delay.  One already on the water point, plenty of congestion, so we carried on past with a couple more boats arriving to do the locks.  Glad we started early, 10am is a mad time to be arriving at a flight of locks me thinks.

We simply headed south, it was a lovely day as you can see but the sun was wasted as we spent ages and ages in tree lined cuttings.  I don't remember the cuttings being quite so long or quite so wooded.
I am not so very fond of cuttings, I much prefer open views and embankments to sit in the sun.

So we had moored last night, out in the sticks in lovely open countryside prior to all the dreary cuttings and to be able to get to Weaton Aston nice and early in the morning to fuel up at the Cheap as Chips garage which is located alongside the bridge on the canal, and for us to have had this completed before the expected rain at 11am.
We got there 45 mins before opening which was a bit of a drag.  But I put the kettle on to enjoy a peaceful coffee, the nice man had arrived early to get his paperwork completed, but he insisted that we fill up way before opening time.  By now it was 9-ish and the rain had started.
Not at all annoying.
We pushed on and moored up here below, just before the aqueduct over the A5.

This photo of us the next morning pushing off was done very cautiously as I had spotted ANOTHER wasp's nest near to the  front pin!!

So here we are at Autherley Junction at the very start of the Shropshire Union canal.  We turn left onto the Staffs to Worcester canal and are very much heading for home now. 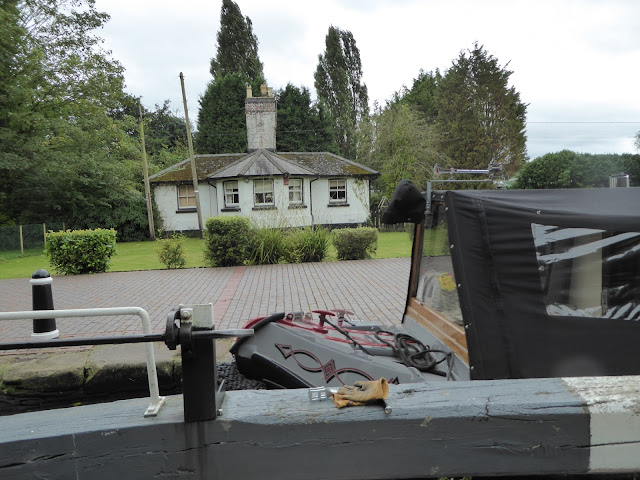 So as the rain began again and David got tired, we moored up about 25 morning minutes from Gailey.
Posted by Lisa at 12:47 4 comments:


A longer day for us today, we started early and left the marvellous helpers in bed.
Pretty soon there was a hot air balloon in the sky.  I love to see them but I certainly never want to go up in one.

The canals seem very quiet now, a few boats we passed but only a few.  Lots of available moorings in Nantwich too. 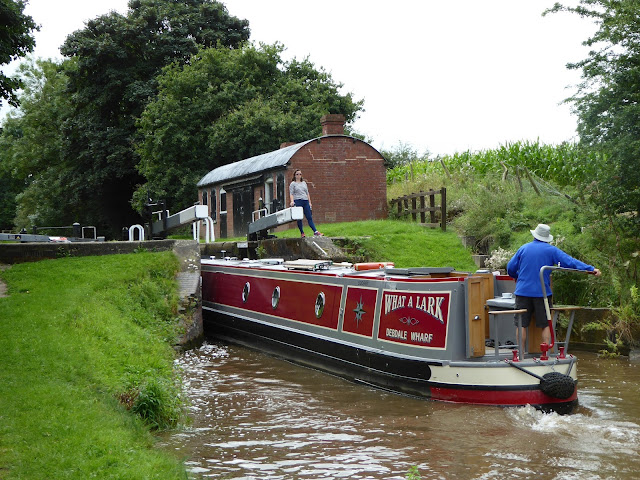 There is a video of Mitch doing this but I was unable to post it.  He cleared it by miles, he should have been in a circus.

We carried on and arrived at Audlum in the afternoon.  A boat in front of us and I witnessed the laziest boating I have ever seen; 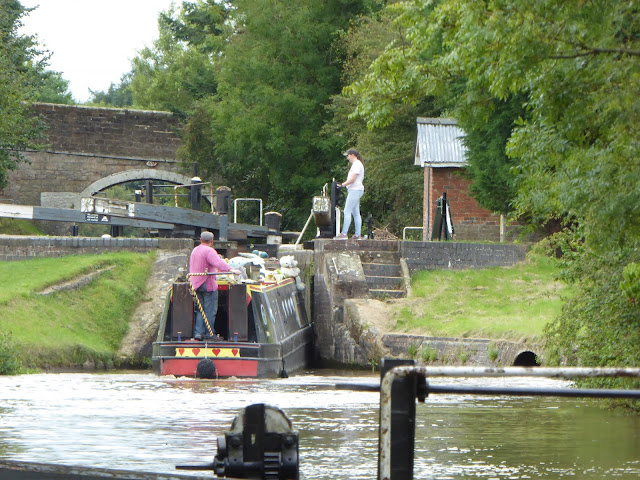 We did the whole lot of locks and moored up so that we could drop them back to Crewe in the morning.
It has been great fun this summer having all daughters in turn coming on the boat.  Ironically, last year when we went down the Grand Union and up the Thames, none of them visited but this year miles and miles away from London, they all come.
Supper was chicken salad and David made a peach surprise.
Posted by Lisa at 22:46 5 comments: