We had a bit of a busy autumn one way or another.
The mass of birthday parties, then we helped one daughter and family move house, we had new windows fitted which meant that every room in the house was chaotic, worst of all was the larder needed to be emptied.  The contents of the larder filled one and a half rooms and I couldn't fit it all back in again...
Next thing was that youngest daughter Verity and Kiwi husband Mitch let their flat in London and moved into our house.  This preceded their departure from these shores, firstly for an extended trip around South America and then to New Zealand.
We were invited to go visit them in New Zealand, which I was keen to do but then there was news that we have another grandchild due in Feb, so we can't be on the other side of the world....  "Come to Patagonia instead Lisa, we'll be there in December too to meet you" said Mitch
"Where the bloody hell is Patagonia?" says I
I didn't really take it seriously but as the weeks ticked past Verity & Mitch's departure date got nearer the four of us piled into the travel agents.  David and I didn't need to do any research or planning, (which was good as I hate anything like that) because V&M had already done lots...
All of a sudden the day came and off we went to Heathrow.
By now I had looked on a map and found out just where the hell Patagonia was.
If you are remotely interested here are a few photos below.
Normal service will be resumed in a few more weeks time after new baby is arrived and Easter is done and dusted. 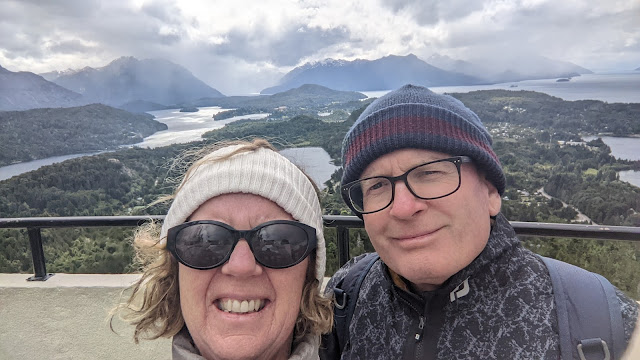 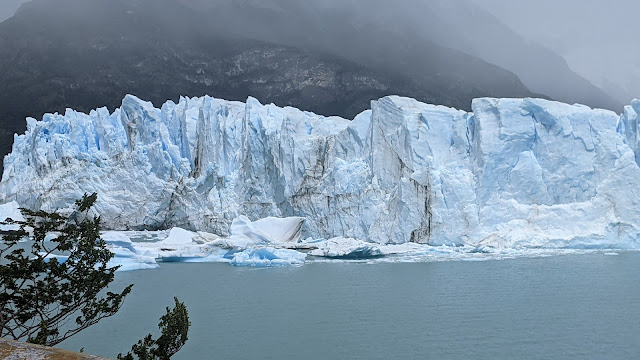 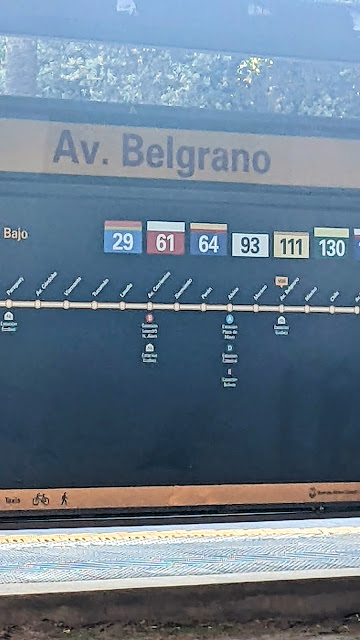 So there you have it.  We had a big adventure, I have told David I need a holiday now.  Another tearful goodbye to beloveds who after another mammoth journey arrived in Auckland and they are mostly on the beach currently, now that sounds nice.....
Posted by Lisa at 23:01 2 comments:

Over and out for now.

So we continued to make our way up the Staffs to Worcester canal.  Frequent Flyers to this blog will remember that this is a favourite, should we have a spare fortnight, we might well "Pop" down to Stourport....  But as it happens we had been away a little longer than I would usually like to leave my mother (She is just about to celebrate her 92nd birthday, along with my own daughter, and three grandchildren all of which have their birthdays within a week of each other) so we do have to get a bit of a lick on now. 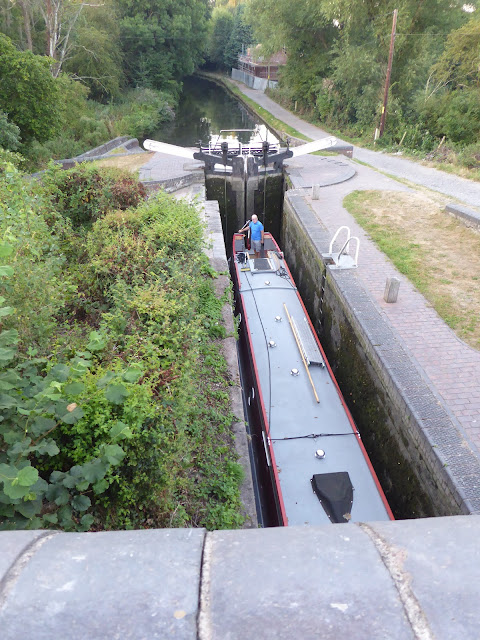 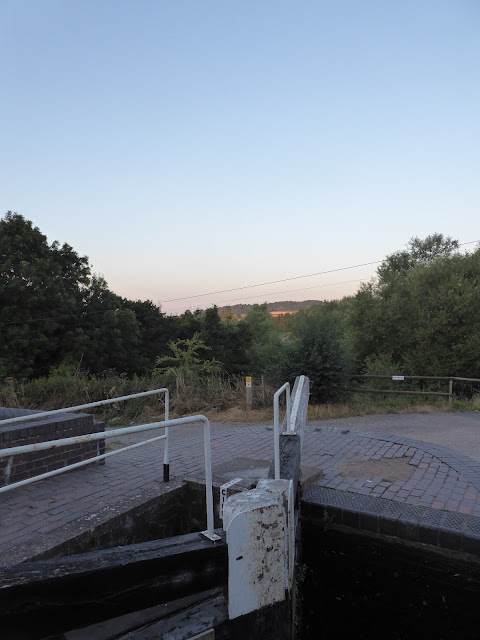 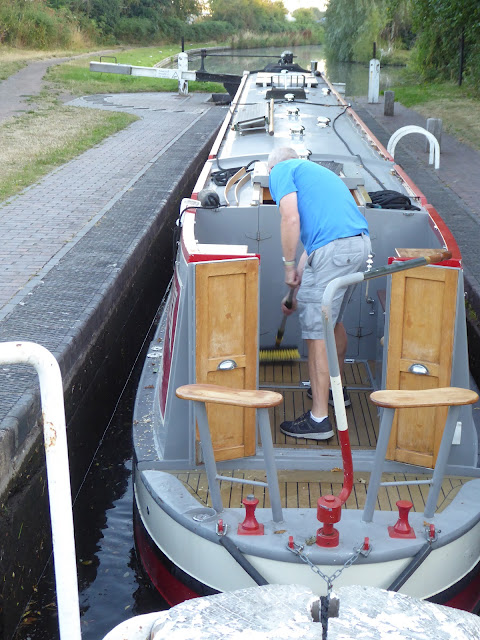 In the cool evening yesterday we had cycled up to the supermarket at Swindon, on the way back several 'yoophs' were sat on a bench alongside the locks.  Of course they had left their rubbish behind, cans and the like so while the lock was filling and David scrubbing his back deck I collected it all up and as quietly as I could put it all in the wheelie bin of the cottage here.  Hoping they didn't have a barky dog.  It was dawn after all.
All too quickly we arrived at Bratch Locks, not staircase locks but very nearly.  The Lockies are due on at 8am but we were there before 07:30.  I was a bit nervous a the thought of operating them as I've not done it unsupervised before.  I went up and read the sign.  Then read it again.
Then a cyclist arrived and as he drank from his water bottle I just casually asked if he happened to be a lock keeper?
He walked towards me as he took off his T shirt and said Yes I am!  He put on his blue Volunteers shirt.
Result.
Not only was it not his scheduled day to work but he'd seen no one else had put down their names to work so he had dropped by to lend a hand.  What a good guy.

I can't remember now exactly where we stopped to complete the journey as you may have guessed by now Reader we are home again and all those birthdays have been celebrated.
There was further fun to be had at the end of our run as we met up with Joe & Lesley first owners of NB Caxton and Amanda and David the new owners of the new NB Caxton.
We all met up in the sweltering heat at Great Haywood on her maiden voyage.

So the 'Boat Sharers' have finally become Boat Owners.
They are off to Canada very shortly to celebrate retirement, spend quality time with their baby grandson and see some more of the country.
We hope to do a bit of boating with them on their return, possibly in the spring now but certainly when we've all had lots and lots more rain to fill the reservoirs.

Now we all have pet hates don't we?  Here is one of mine.  CART work boats in general, not when they are actually working but when they are not and are moored awaiting being moved further along perhaps.  But Reader how many time have you come across a CART boat moored on a lock landing?  Well I have quite a few times and I find it irritating.  This one below is moored perfectly legally on a CART work boat mooring but just look how short it leaves the waterpoint landing.
Now we didn't need water today but even so.  I do think that there should be space for a full sized boat to moor up on at water points.  I think it would be kind too of CART to put in a few extra water points after they have taken one out of service. 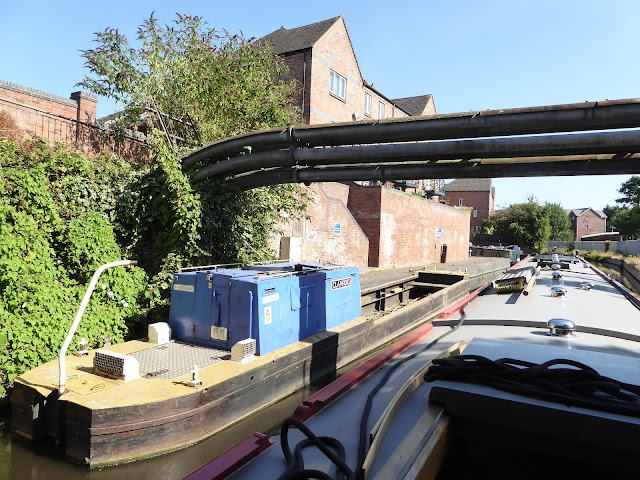 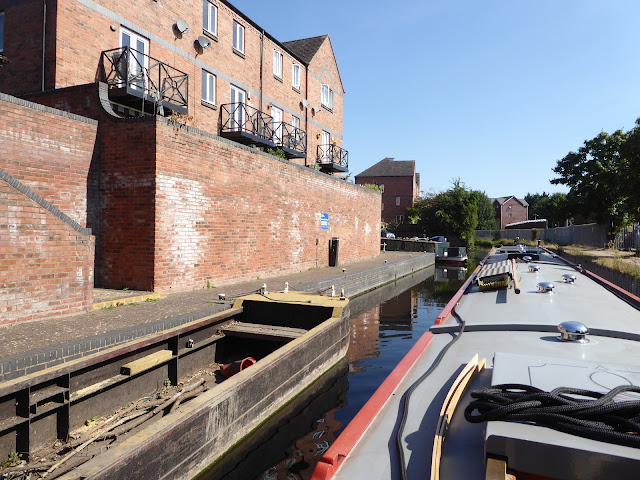 We made our way from Stourport today, yes leaving very early again.  I had popped into Lidl last evening and enjoyed the air conditioning there so we didn't have to face Sainsbury's here.  In the past the moorings have always been full at Sainsbury's but yes you've guess it not today.
Although we had to wait below this lock for several boats and I had gone up to help, when it was our turn no boats anywhere and no help for me but that's the way the cookie crumbles.
I just wanted to moor up under trees along with most other boaters today, we were heading for Wolverley and The Lock pub.  As we got closer the moorings looked busy but a big tree had a space beneath.  We hopped on it and moored up.  The captain of the boat in front walked back and offered us to go into the lock next as they weren't quite ready....  I declined but thanked him for the offer saying that its was far too hot now to carry on, yes he said we are only going on to Kinver and stopping...  Kinver is a good 2-3 hours on and some shaded moorings which I estimated would be full by the time they got there.  But that's folk for you.

In the late afternoon we strolled up to the pub for late lunch  or early supper.  It was packed still.
Then it dawned on me that the building is white, the umbrellas were white and in the later afternoon gave hardly any shade as the sun had sunk so low.  We sat for a while but gave up pretty quickly and went indoors to the "Dining room" where we had the room to ourselves and waitress service.  What a relief.
Supper was their signature burgers.
Posted by Lisa at 09:46 No comments: