The north wind shall blow and we shall be freezing yet again...

We left Olney, it was all a bit dramatic as David literally burst into the bedroom from the back of the boat, I was awake but relaxing, he'd been out on the bike
"Come on we got to go its going to rain at 2pm"
Up I jumped, put on the wrong trousers but I was trying to be quick and didn't bother to change them, it had been quite a nice morning up till then but in the space of what seemed like ten minutes the wind had picked up and the clouds had filled in any blue gaps, it was the same wind from the arctic that we have all been enjoying for weeks and months it seems like.
(Our youngest daughter and her Kiwi husband fled to New Zealand in January to escape the winter, the Covid and to work from home, David says if I keep banging on about how bloody cold it is she'll never come back).
We were underway as were a few other boats, in fact of all the boats we met, every single one of them we met at bridges on the bendy section.
It got colder.


I want new ropes for WaL, I want soft to touch ropes and after buying some online which turned out to be harsher than our existing ones and to return them at eye watering cost we decided that we would touch them first.
We'll go to Tradline HERE we concluded, but yes you've guessed it, we went through Braunston on Bank Holiday Monday, closed.  We'll call back.
Braunston like everywhere else was quiet, many free moorings but no one waiting to go up the locks and as if by magic when we approached the gates opened..... Those lovely volunteer Lockkies were at it again.  Jolly and laughing they did the lock for David and sent me on my way to prep the next one.
We did all the flight on our own but had the benefit of meeting some boats coming down, a pair of hired boats who shut the gates behind them sadly so I had to open them again, but there you are. 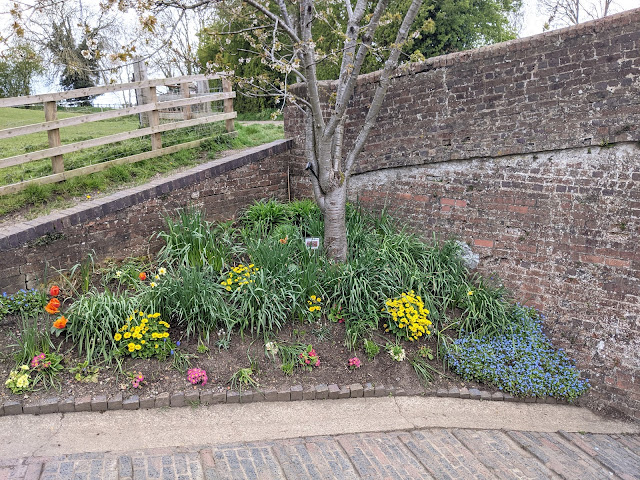 I know you can't see the wee sign, but there are now several borders along these locks all paid for and tended by Mr Nick Wolfe HERE  so I say thank you sir, your efforts are much appreciated by me.  NB Aldgate was moored along here too. 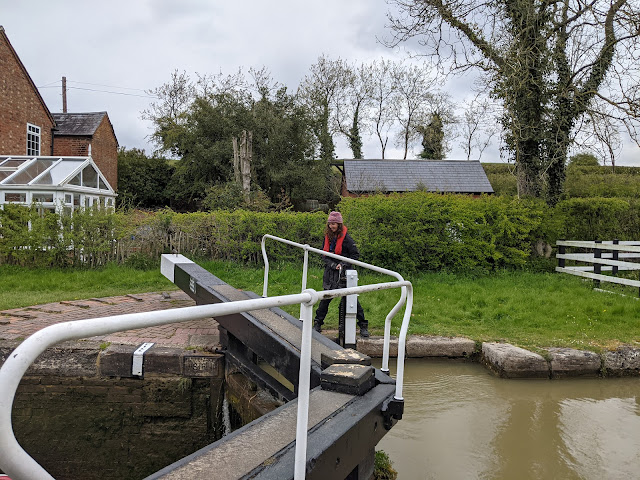 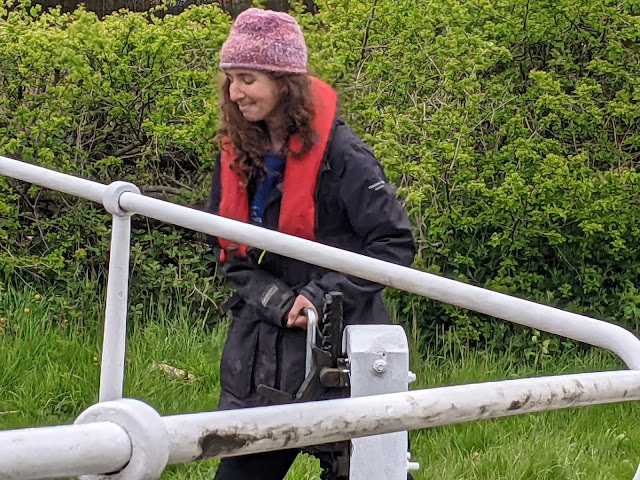 This lovely lady was a CART operative, not a volunteer, she was working today covering the Buckby Flight, the Watford Flight and the Braunston Flight.  She had already sorted out a problem at Buckby that morning and was on her way back to her car but saw us coming and said it was rude not to prep the lock for us.
She is a member of the "Bank Team" which I took to be actually working on the bankside and she is one of only 11% women working on Bankside and proud to be one of the 11%.  She loves her work and definitely say hello to her if you see her.

We made it all the way to the second to last lock then the heavens opened, David said two hours early than forecast and we hopped quickly onto a mooring spot before the tunnel.  No Internet, no phone signal, an early night then.
Supper was M&S slow cooked beef brisket in BBQ sauce.
Posted by Lisa at 11:41