So it seems that we were not south of Stoke Bruene last night but indeed between Weeden and Nether Heyfield..

My thanks go to John for putting me straight and laughing loudly at my mistake.  John, who, as his wife Louise tells me, carries around a copy of the Road Altas of GB in his head, John always knows where he is and what's happening.
But that's Policemen for you.

This is the view I had from the side hatch last night.  Rolling hills, lambs skipping, the odd train passing and the last golden rays of the sun shining on the grass.  Now Lockdown is easing somewhat the numbers of trains is increasing from a few to a few more, but train noises don't bother us, we find them relaxing.

The first full day of holiday fun started the next morning with no locks to do only the Blisworth Tunnel to look forward to which was wet wet wet.
We did meet a boat in the tunnel but frankly I don't think we met more than a couple all day.
Quiet, quiet, quiet is the canal.
In fact we met two boats at this bridge hole coming towards us, they didn't stop to look and one was right on the tail of the other.
This is the junction of the Grand Union Canal and the Northampton Arm branch of the GU taking you down 17 locks to Northampton and then onto The River Nene.  This boat has come up there back in 2015, but The Boat Sharers, Amanda and David did the work that time while David and myself were at home sitting in the sun, but that's another story.
The day was cool and grey, then got cooler and greyer and the wind picked up.
The tunnel was nice and straight but had several torrents coming down.
Out of the tunnel and around the bend and Stoke Bruene hove into sight.  Now it was busy here but not with boaters, just visitors.  The wind picked up more here, swirling nicely around the buildings making helming tricky as we waited for the lock to fill and ruining my hair. 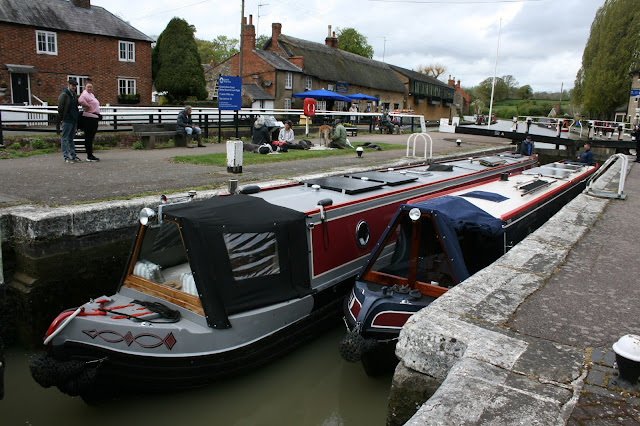 We pulled into to moor after two locks on a nice long line of mooring, this sounds easy but what you can't see in the photos is how the wind caught WaL and was determined to have her and me hanging on for dear life pulled into the canal.  Thankfully John got NB Ploddin' Along moored up more easily as he was more protected behind a hedge and ran back to rescue this damsel.
Finally moored up there was a conversation about replacing WaL with a shorter, lighter NB.  David said no and that was the end of the conversation.
For now.
We stayed put until the fishing competition being held below the locks had finished then set off again, had we of known what was coming tomorrow we wouldn't have bothered moving.
An oncoming boat said she had counted 120 fishermen and only three had responded to her greeting.
Now just look at these next photos....

Did I say the pair looked absolutely fabulous?  Well they did.  They also had converted Butty Nebulae into a workshop with I think the lady told me 6 or 8 sewing machines in where she makes cratch covers and all repairs but lots of beautiful embroidery crafts including bungs for portholes and you can see all here HERE.
Well we did move on later in the afternoon and the wind developed more and more.  We got in near to the village of Grafton Regis in a gorgeous setting with the wind holding us into the bank this time.

Supper was Thai green curry that we invited John and Louise to join us with onboard WaL, later we taught them a card game Sh1thead, ghastly name but a good game.
Posted by Lisa at 17:15