At length it stopped raining.  But every cloud has a silver lining because the rain keeps the Gin Palaces in their marinas, they are not nearly so hardy as us Narrow Boaters you know.

After tea and breakfast served in bed with my companion, not husband you understand but Amanda, we hardy four set out for a cycle ride, the Thames path was wet and orange in colour due to the sandy surface, the splashes made my white socks orange and after several washes haven't come out yet.  Kingston Council will hear about that.

We passed the empty moorings at Kingston Bridge, a couple of boats had arrived after we passed by last afternoon.

Onto the roads, WHOA!!!   Devilish traffic here in London, and not cars, I am talking about herds of marauding  Lycra clad whizzers on two wheels who take no prisoners and will run you down as soon as look at you.  God help women children and old folks on Bromptons who get in the way.  I forgot to say this was a Saturday morning when they all get in their fancy dress and take to the roads.

We all got safely onto the pavement, a "Shared Space" to get out of their way and soon enough found Bushy Park, well its big enough so it shouldn't have been difficult to spot.

Once inside you felt somewhat safer.  I am liking these London Parks, Bushey is a whopper, full of mothers with pushchairs, dog walkers, cars doing 20mph, bikists, runners and deer all living together and not causing too many problems to each other.

There are maps all around, but even so we managed to be slightly where we didn't expect to be..... (You might say lost).  To get back on track, we went out of the park and up Hampton Village High Street, and I have to say Reader Hampton is charming and I might like to retire there.

When we finally exited the park in the correct place we walked our bikes through Hampton Court Gardens, there stopped in the Rose Garden.  Owing to the relatively early time it was empty


Not too much time to linger, we had to go.

Engines on, help Lesley cast off he called, of course I did then he pulls away without me.  Lesser women than myself might get twitchy when their husband says basically get off this boat darling and I am just going to sail away with your best friend....


After the lock, all these non boats came into view... I can't decide what I think of them, but overall I think I believe that houses should be houses and not clutter up the rivers and boats should be boats and stay on the water.  I would fear for my mother's safety if I lived here and she came to visit.

Looks a bit like Tara form Gone With The Wind don't you think? 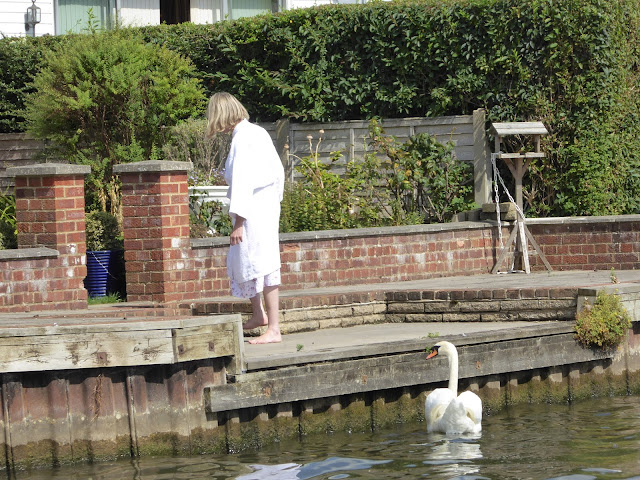 I am sorry to have missed timed this shot by a couple of seconds but she was berating this swan loudly enough for us to hear as we passed by with a pointy finger I might add,
I am not sure what the swan had done....

So then just before the next lock is the turning left to the River Wey, so Reader you go around the corner and are faced with four possibles,   Is that the River Wey David called to a moored up narrow boater?
"No idea mate" says he....
"Excuse me is that the River Wey?" asked next to a young girl in a passing canoe
"Yes: say she  "I think" she follows up with....
So we went with her guess as it was as good as ours...  Its just that it was the narrowest and most overgrown of the four options, and one of the other options was a weir....
Then as we passed it by, completely hidden by a bloody great willow was this sign;

So the turn made, around a corner and the lock keeper comes down to meet you, or so I thought, but he was going behind both boats to close what we thought was the flood lock, this was to increase the water levels as we were deep draughs, not sure if that is correct english.
Anyway, up through the lock, the rules here are that you cut the engines in ALL the locks and rope up pointy end, middle and back end.  All extra extra cautious and blow me down the LADY Lock Keeper who was in charge, (Not the man who was her gofer), but both of these two don't wear Life Jackets!!!!!  I was staggered.

Anyway we paid our not inconsiderable fee of £117 and set off, through one lock where I was inside making the tea and David at the helm, when a RAT, ran out of somewhere, darted along the back, looked at coming into the boat but in the end decided happily to jump ship and scampered into an overhanging bush.  Now Reader I have to tell you that although the others on the is trip have seen rats before I haven't and I want to state for the record that had it have come uninvited inside I would have jumped ship instead and gone home to my mother.


We moored up just outside Weybridge, cycled in to Waitrose and brought ingredients for Roasted Mediterranean veg and roasted sweet potato, with blackberry and apple with thick cream for dessert.