Skinny Day dawned however thanks to that cheesecake last night I didn’t need any breakfast.  David was up much later than usual at 5:45am.  He got busy washing the pointy end and the back end of the boat, nasty fiddly bits they are too.   Later he turned the boat and so Amanda and I could wash and polish the other side whilst he went off to the chandlers to do what he hates, spend vast amounts of money.
We now have a pair of much fatter dangly bits and a pair of those handy little mini tyres things that float, they probably have a correct name too but we have them anyway. Ropes, handles, loo cleaner and more engine stuff but, most of all in the importance stakes were these little beauties.


Cur
Currently being modelled by Amanda and myself, as I only have one pair of glasses so anything thing to prevent them falling in has got to be worth it….. whaddya say Lesley?  They float too.

Here I saw the first Brimstone butterfly of the year as it wafted past, a delicious lemon yellow and named after NB Brimstone that we met last year, the first of all butterflies to appear in the Spring, look out for that boat, most charming people.

Cratch cover repaired and refitted, the boat is nice and shiny so bound to annoy someone somewhere but we are happy members of The Shiny Boat Brigade.

Finally finally off we went towards Napton Locks on the way a swan swam close to the front if the boat seemed to disappear then was at the rear attacking our button,  I wonder if it was something we said? 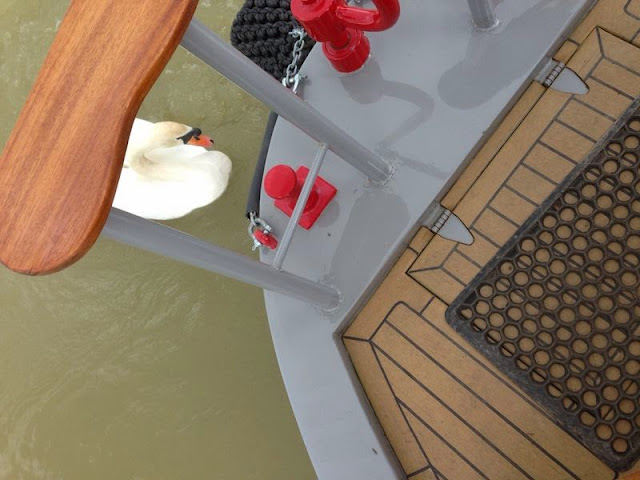 Here we are comfortably parked and saw a most colourful sunset but no photo as it was seen through a bush and condensation from cooking supper but it was nice, we liked Skinny Day fish curry on Monday so much we are having it again tonight but I think with a variation of adding some chickpeas.
This is husband and but not wife.