I had managed to keep David in bed till 7am, almost unheard of, a real Red Letter Day.  I persuaded him that maybe he shouldn’t go through Amanda’s room and disturb her.....  This was because yesterday, Amanda confided in me quietly that David had Flashed her! Words that no wife wishes to hear,  I was aghast and appalled.  I confronted him immediately, he was confused, bewildered and befuddled, it turns out he had inadvertently turned on her bedroom light in the dark.

Oh my goodness what a fantastically sunny day it was, blue skies and wall to wall sunshine.  Later David went off to get bread and a paper from The Folly Stores, it had a sign outside saying “Come in we are open”, however they were closed, so he went instead on his bike to Napton Post Office Stores, which were open and had nice veg, milk, a paper and bread, Excellent.

Amanda and I chatted in bed whilst David made porridge with 3 of our, well is it 7 a day now or 10?  Anyway after a short while, crew were up dressed and looking gorgeous.  Captain called out orders and off we went to do the flight and nicely, on this trip all the locks were in our favour again,  with a fair number of hire boats returning down the fight towards their bases for the weekend finishes. 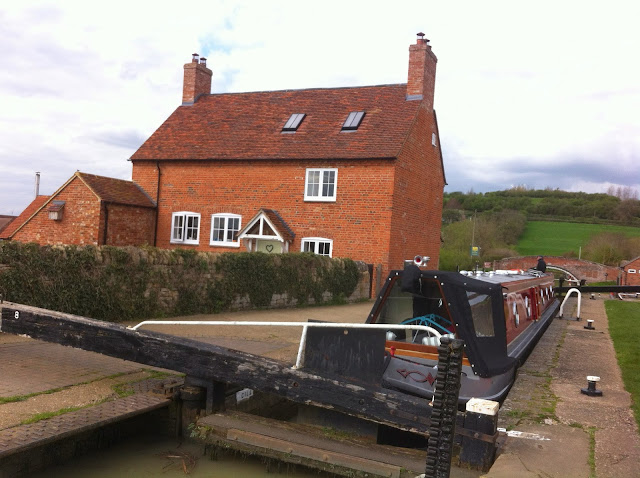 I forgot to say last night but suddenly the previous afternoon there was a nice chap helping with this lock, I couldn't clearly because I am chief photographer,
he was the owner of this now beautiful cottage, they got it seven years ago, it had been empty for fifteen years and I think he said it took them three years to complete.... if anyone is interested it has a self contained holiday let attached too. 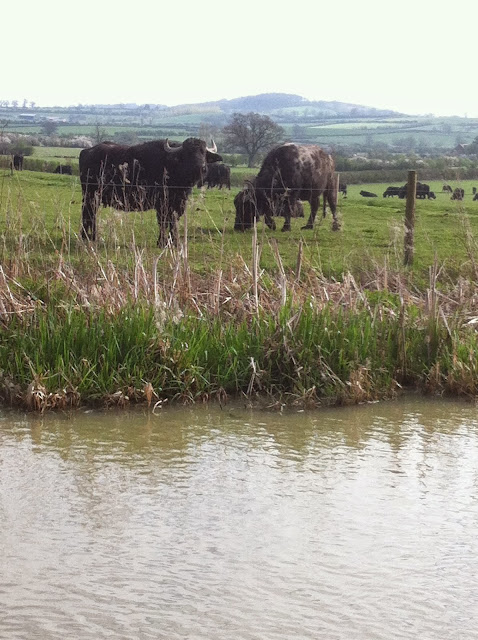 Hard to believe non boaty or come to that non farming readers but yes these are buffalo in the heart of the English countryside.

At the top lock I chatted to a couple who had walked up the flight in time with us, I asked if they were from Napton and yes, they were residents of some 20 years and had been boaters for 40 odd years.  I asked about the windmill and what I think is a great pity that this iconic landmark is so obscured from view from the canal.  They completely agreed and said they would pass on my comments to the owner I think they said.  Does anyone else miss the view of the windmill? 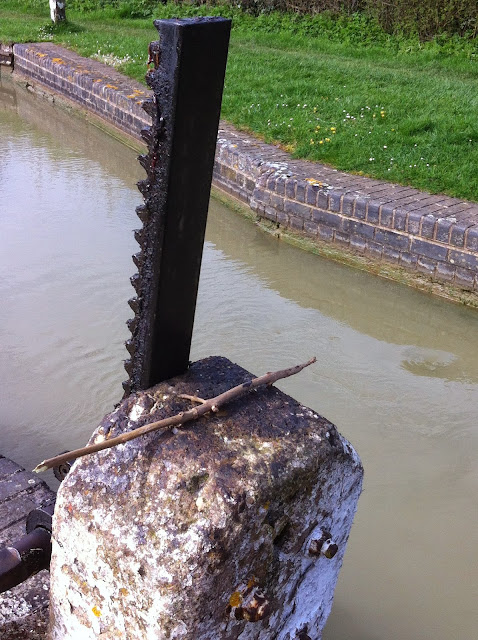 They say you learn something everyday and we both did, thick thick grease on everyone of the paddles along here, but the gentleman pointed out to us silly girls that these little sticks and provided free to flip the flippery lock locker.

Last year David and I had enjoyed a walk up the hill from the canal to the village of Wormleighton.  Knowing that Amanda would like the village too we decided to stop and repeat it for her benefit. We approached the mooring place that I thought we were heading for, but “No no we can get nearer”,  I pleaded that this favoured spot was empty, had a large gap in the hedge with marvellous views, “No its better further on”, so on we went.  Later with a “Give me that map again!” and “How did I cock this up”  it was realised that the mistake was not mine and the reader will be pleased to hear that I REFRAINED from those words guaranteed to enrage
“I told you so”

So here we are parked at Fenny Compton, near a main road, however on the plus side, the huge trees overhanging the towpath had been massacred so it was beautifully light and open.

We did walk back to Wormleighton up a sunny hillside next to a large meadow full of ewes and their lambs, it really was fabulous.  The village has an interesting history with the Spencer family, forebears of Winston Churchill and Lady Diana.  The churchyard was fenced with sheep and lambs tame enough to be petted, until a fat ewe crept up behind Amanda and nearly gave her what for.

Back down the hill to the pub at Fenny Compton, then home for a sunny supper of chicken salad and potato wedges with salad. Food of the gods.