There's a tiny bit of randomness going on here.

So I don't know who it was that switched the camera off of auto and onto sepia, cats mother I think but here we have a nice arty shot of a Turnover Bridge, that is to say to any non boaty people reading this, that the horse pulling the narrowboat on a long long rope could go up the bridge on the right, walk over the bridge and come down towards the camera on the left hand side of the photo, then go under the bridge, on the tow path and continue on its journey now on the other side of the canal and all without having to unfasten the towing rope.
Clever or what? Plus an object of beauty. 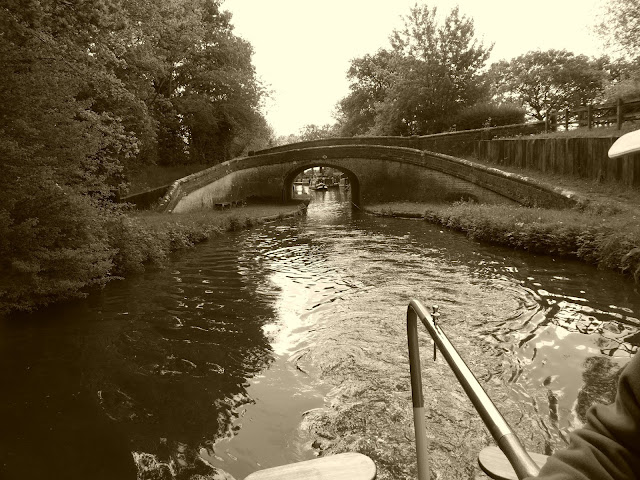 So eventually we are arrived at the beginning of the locks.  So there are two smaller flights of locks and then the Audlem Locks, so we were happily going along and oh my goodness admiring the views.

So as I say making happy progress and I went ahead to do this lock with a very nice lady who's boat was coming towards us and during our brief conversation the nice gentleman above, (I am so sorry I didn't ask your names) explained to me that this pound was very shallow and that our boats should pass close to each other in the centre of the pound, I thanked him and jogged back to tell David as we are new here.  Yes fine and off they went, I then returned to the furthest away lock again and as NB Constance moved away, he called out that he read my blog!  I was most surprised and asked him how he knew I wrote one, I recognised your hair as you walked down the towpath he replied,  so it seems having boat hair has some benefits.
Lovely to have met you both, next time perhaps we'll have a bit longer to talk.

So onward again and away from the trees and out into the sunshine and how lovely to be really warm in the sunshine too.  We had been told of a great farm shop along here at the top of the Adderley flight and suddenly there it was, selling pork pies, scones, then some scones with jam and the ones I brought were scones with jam and clotted cream.  David had a pork pie which were huge and sadly got eaten before I could snap a photo.  They also sell gammon, sausages and steaks.

So off we go again and we are following down a very nice Steve Hudson boat, and behind us a hire boat with a couple onboard.

There was quite a delay while the boat in front was waiting for the third lock of five to fill.  I went along to help/chat and finally the two of them heaved the gate open.  Our go and I turned the lock, or tried to.  While that was doing I went ahead to prep the next one, then came back to our lock so to speak.   Eight or nine inches short, I walked to the downhill gates to check the paddles were properly shut and they were.
No joy.
So after much discussion and heaving we decided after looking at the leakage from the downhill gates to empty the lock again try to close the gates more closely and refill the lock again.  In fact the hirer from the boat behind us, came to help and between the four of us, we kept the gates closed tightly and us girls opened the paddles again.
The lock filled to the same level, eight or nine inches short.

By a horrible coincidence, the lady from the Steve Hudson boat in front of us, had walked back to say that the boat in front of them had gone through a bridge hole on the fourth lock, walloped an underwater obstacle and displaced his rudder.   The following Hudson boat had felt the knock underneath but it hadn't affected him but he had pulled up to help his travelling companion.

So picture this Reader, four boats in five locks at a standstill.

We rang CART.  Sometime later a nice man in a van arrived to help.   He started with our lock and pretty quickly deduced that one paddle had broken and with the leakage at the bottom gates the lock would never fill.

While he repaired it, another boater from the moorings below  the locks, walked back (To buy another pork pie) and told us all of a old traditional boat had gone down the flight yesterday and he had dropped each of the paddles without using a windlass at all.  It had infuriated him at the time and now having seen that the paddles are held by a bolt, if they are left to drop Wallop, it damages the bolt, shortens its life and causes unnecessary call outs by the engineers taking resources away from other problems.
I give notice now that whenever I see people of any description dropping paddles I shall report them directly to CART.

Hours later we were off again.  The chairs had been out, the pork pie eaten, a glass of enjoyed.  So with the rudderless boat still struggling there awaiting RCR to help them, we crept throughout the bridge hole, engine off and rope pulling it through, not a hint of a bump, we think the second boat had knocked the obstruction completely out of the way.

So out of the last lock and we moored up straight away, you can spot us 6th boat from the left.  There were lots of spaces when we moored up but boats arrived all late afternoon.


We went for a walk.    Dearest darling calves gambolling about  and the farm had its own road!  A cul-de-sac with only an impressive farm there. 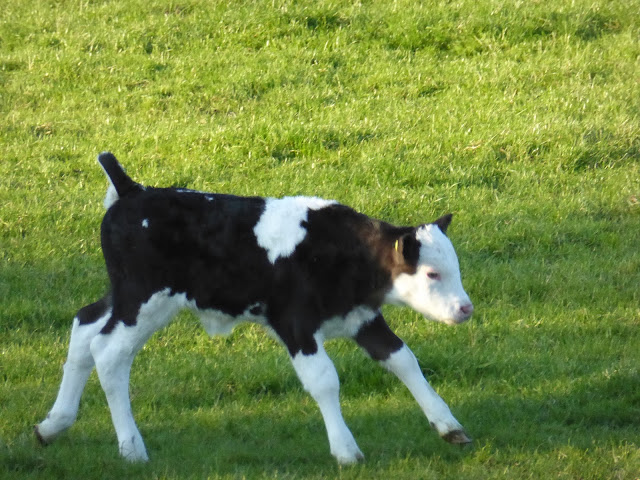 I don't think he said yes, however he watched through binoculars he silaging right opposite the boat all evening!


Final word of the day goes to David, these two had raced by and as David was polishing the front of the boat they returned and in loud voices, one was describing how he met his current girlfriend.... "We were both in the process of splitting up, we went out to ******* "
"Thats an odd place to go for a date" said the other one
splash splash splash

"Can you slow done please mate" calls David, "I want to hear the end of this story!" loud guffaws from the one listening to this story, David and myself and stony face from the teller. 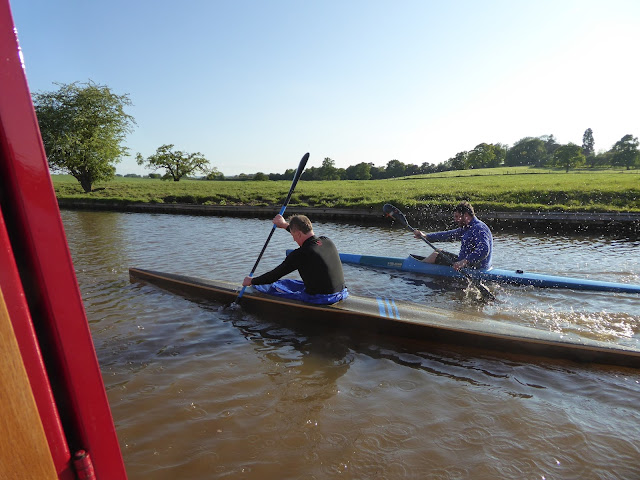