The weather was disappointingly damp, sometimes not so wet and sometimes hammering it down.
We decided, bravely,  to go for a walk, but what to wear...?
The path over the fields was a track  but to get to the track we had to walk 200 metres down the towpath in long wet grass.
I ended up in wellies, David hasn't wellies, hard to believe for a farmer but he says he's going to get some now.
The bridge we needed to cross is a Lift bridge, there are one or two hereabouts and we have never seen them down before.  A chap was walking his dog and had crossed it said actually he had never seen it up before!  Luckily it was a doddle to put down and light enough so you can control it, preventing it from walloping down.
Two minutes away from the bridge the canal disappears entirely from sight, if fact the evidence of the canal is the overgrown towpath!!!!!

We took a map and were headed for Souldern.  I had called the pub there during the morning to see about booking a table for lunch but they were fully booked, so just a drink today.
It was a very pleasant walk to Souldern and seemingly without noticing we had gained height and had a pretty good view of the surrounding countryside.

Souldern is extremely pretty with a few very large stone properties and expensive cars.
I ordered our drinks by text, simple system but has it's drawbacks when you want to know which gins they have, do they have rhubarb gin? Which beers do you have?
The boss was in the garden and helped with that bit also the very nice landlord found us a table and although it was close to the end of the session allowed us to order lunch.
The walk home was a different route, this time going over the M40,
I can feel smug crossing motorways as I can guarantee that the drivers would prefer to be walking home from a great lunch instead of being down there. 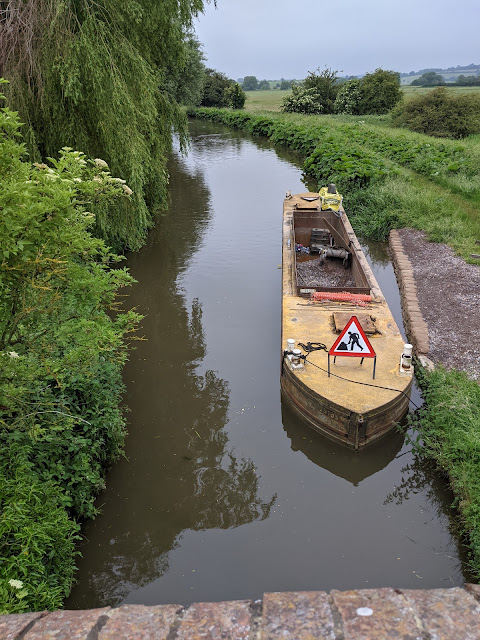 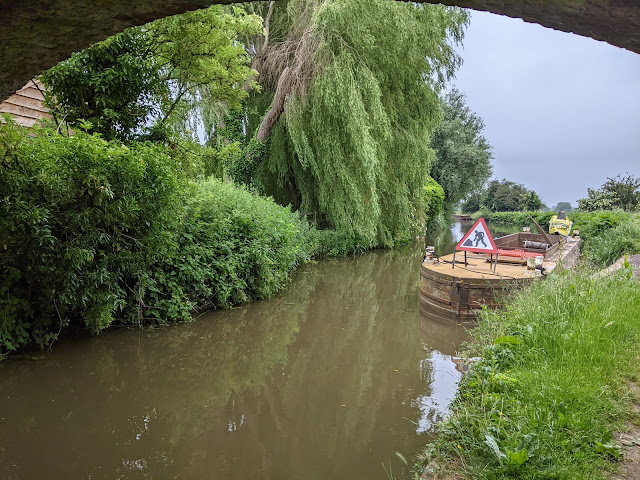 An example of CART's mooring here, right on top of a bridge hole.  Bless.
Lunch was for me cod and chips and with warm brownie and ice-cream, it was very good but that apricot cheesecake yesterday at The Old Bookbinders in Oxford will be hard to beat this boating season I reckon.
David chose smoked salmon and crayfish risotto which was divine and I had food envy, I will have a go at that on the boat I think.
So Reader if you are on the South Oxford I can recommend a short hike up to The Fox, its not too far or I wouldn't have gone.
Posted by Lisa at 16:19