And now David is playing The Who!!!

True to my word we left early the next morning.  At 05:45 the engine went on and away we crept as quietly as you can at that time.  David had been up even earlier to plant the car in the village of Welton, the boat had been in Welton Marina.
David was on deck alone but he did say later that yes there weren't any spaces to moor up along the main line GU towards Braunston the previous afternoon, the chap with the big dog had been correct!
It was nippy that morning despite the blue skies, but then it was a tad early for most.
Through the tunnel  (The main point for the early departure) but David did meet an old vintage boat and the helm called across "Another idiot about this early in the morning"
We paused at the top of the locks.... shall we wait for another boat to perhaps join us or shall we just go down alone.  Going up is another issue but yes lets just go down alone and have breakfast in Braunston as we wait for our shop to open.
We entered the top lock at about 7am.  Absolutely gorgeous Reader, but just read back two posts to see the weather we had been having up till last night...

We jumped onto the first available space and tied up close to the marina, when we were sorted I saw a sign that said Mooring Reserved for Adventure Fleet, we'd moored on the hire boats section, although a way from where the boats usually are, we were good children and got on again and moved WaL down a wee bit more.
We went into Tradline  HERE  and what a treasure trove that place is too.  I'd been years ago with Joe and Lesley of
NB Yarwood  HERE when they picked up new buttons.  I've given you here the first blog entry of Yarwood instead of the last.  NB Yarwood had the loveliest of ropes, as did WideBeam Still Rockin'  HERE that we had so enjoyed being on.
I'd wanted new ropes for sometime, I'd even sent off for some but when they arrived they were as hard as our current ones so they were returned at a cost of £18 postage ouch.
A lesson was learned that day and since then I've been wanting to go to Tradline.  Several times its been a Sunday as we came near.
So we ordered a full set  and I can't wait till they are completed.

We moored up some time later in what was to be an internet and phone reception blackspot.
This below was our very pretty resting place, the sun came out and suddenly there was a voice saying Hello What a Lark!  and there followed an unknown boat to us NB Quadrophenia.  It turned out to be Richard and Sharon, who had a boat I had fallen in love with at Crick NB Oakapple.
NB Oakapple was sold three years ago  when they decided to follow other interests together but then Lockdowns happened and they wanted another narrowboat and now Bish Bash Bosh they have a slightly shorter boat that has a completely different layout to Oakapple and they are away boating again.
Stupidly I didn't take a photo of you both but great to see you both enjoying the canals again.  Hopefully see you again later on. 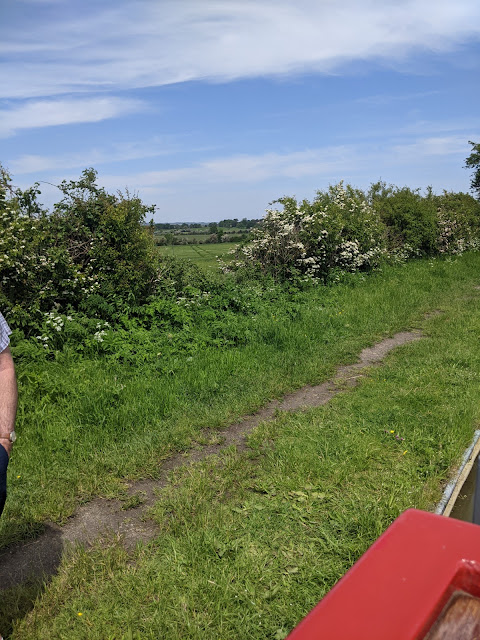 Supper was chickpeas in paprika, salad in blue cheese dressing with haloumi on the side.