Let's be daring, let's go to the pub!

How I've put it in the title isn't really how it happened.  We had planned to go to this particular pub ages ago.   I really like  The Rose at Willoughby.  HERE
This nice pub can be accessed via the North Oxford canal out of Braunston and via this Grand Union canal (South Oxford canal) but the later on bikes.
D was up and out early of course and on his return said that the tow path was wet and rutted so we quickly decided to move the boat on a bit so that I could avoid the wet mud and subsequent moaning.
So we set off after I had taped up the cratch window and started rubbing down.
I hate this job.
It seems such a short time ago that we sat on a glorious mooring on the River Avon and I rubbed it all down and with advice from David Lewis I put I think ten coats of varnish on the wooden cratch frame.  I completely thought that would have lasted fifteen years or so but no, here we are again starting afresh but I have to confess it isn't nearly so bad as last time.
To find the tape I had to tidy out a cupboard and to find the varnish David had to dig deep into the back lockers.  He has promised to rub down the boat pole which is in a horrendous state and re-varnish that.  Finding the new-ish sander was another whole chapter.

So from the boat it was a six mile ride by bike.  I haven't been on my bike for ages and ages and so the ride would have suited me more, or rather suited 'ma derriere' to have been half that distance.  I didn't know the way, "Don't worry darling I know the way" and below this is the sight that met me, David nowhere to be seen and an empty lane.
I tell you Reader he is a serial offender.

This was the view tonight out of my kitchen window.  I do love this boating marlarky, a new view each day, but this spot was an internet and phone blackspot. 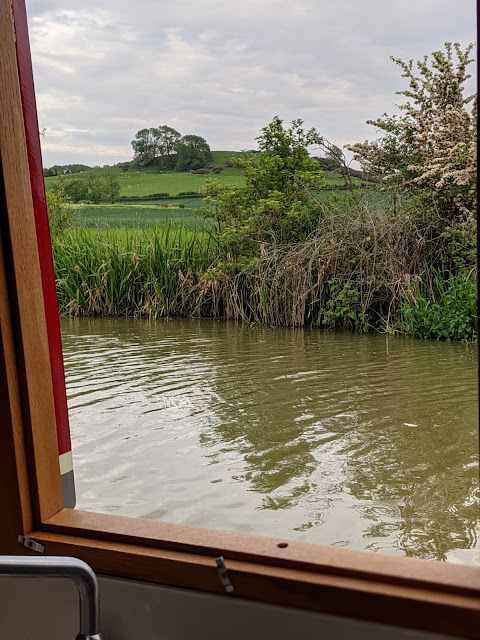 Lunch was chilli and garlic king prawns, duck in orange Cointreau sauce and oh my goodness treacle tart with clotted cream.
Posted by Lisa at 19:56