These last two days or so I had been trying to get through to CART on the phone to ask about water levels in general and possible closures in particular.
The first chap I explained where we were and he said hold on I'll go through to the local office....  He came back on the line and said yes the local office says bleeeeeep as the line went dead.
I called again and went through the whole story, this person had no idea so again said he'd go through to the local office.  He came back saying there were no problems but limited moorings that were completely booked.  But that he had some good news that new moorings had been made available bleeeeeeeeeep.. he was cut off.
The next time I pleaded with the lady to call me back if we got cut off as it was like inventing the wheel each time.
She solemnly promised to call me back and she called the local office which you might have guessed by now is central Birmingham.
She got cut off herself speaking to them, she said clearly they have a problem with their communications and said she would keep trying and call me back.
I'm still waiting.
We had stopped overnight at Hopwas and waited for The Lewis's to arrive.
Their own journey to us was further complicated by them having a puncture on their way home last night and in the modern way their car has no spare wheel.... Yes Reader I can hear you thinking what kind of a car hasn't a spare wheel?  I agree with you, it's a mad world where spare wheels are kept at the garage and not in the boot.
Well the reason they were coming was for aid.  They are in a bit of limbo due to unforeseen delays to their launch and we were up a gum tree with our booked helpers failing to show that is to say our youngest daughter and her husband Mitch.
So instead of waiting at Hopwas we scooted down to Fazeley Junction.  Whereupon D cycled back and brought the car down too.
He called me to say he'd arrived, I was on WaL next to the water point.  I'm not blocking someone's drive but I'm close to doing so.
I walked around the corner and indeed he was parallel to their drive.  I walked up to the door to talk to the house owners,
I had a good feeling as this house on an estate was called "The Moorings"....
So my new friend Carol and husband Ray are co boat owners and going out on their narrow boat the following week and she was so very kind to allow us to park my car for a couple of nights...
It's good to talk.
In fact Carol and I chatted for some considerable time, leaving David plenty of time to fill up with water and rub down one side of WaL.
Finally, we drove off to meet the Lewis's at a pub on the Birmingham to Worcester canal loaded up our car with their overnight things and drove back to Fazeley leaving my car under the watchful eye of Carol.
We set off I think about lunchtime turning onto the Fazeley to Birmingham canal and in sunny and warm weather reached the bottom lock of The Curdworth Flight.  Where we met Angela her husband Dave again from yesterday, I'm so glad she located him last afternoon.
They were on a splendid mooring miles from anywhere with good views for the weekend.

We did the flight with the ease that three locking crew affords and moored up a few hours later close to Curdworth village which has an interesting church that one day I will visit. 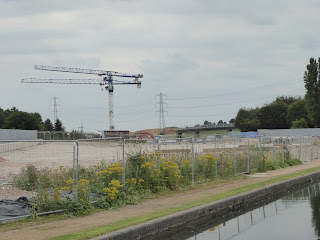 Early night all around to have a bash at the Aston Flight and Farmers Bridge flight tomorrow.
Supper was chickpea & blue cheese dressing on salad with naked burgers burgers.
Posted by Lisa at 15:08