This morning pretty early David had moved the car from somewhere to Stourport or even Kinver, sorry I forget.  He'll soon tell me when (If ever) he reads this.
But anyway he arrived back before 7am and burst into the boat saying that a boat two down from us was moving off and if we were quick we could share the two big locks down onto the river with them.
I was dressed in a flash as this was a good opportunity to halve the work.
Luckily, they were wanting to turn their boat as they had come up a couple of days ago from the Severn onto the canal, (decided against mooring on the almost empty moorings at the Racecourse) and now were facing the wrong way, they took a while to complete this manoeuvre owing to a couple of misplaced widebeams moored in the basin here.  By the time they were in position we were waiting for them.  They would be continuing south and the river Avon and us northwards so it would just be these two big locks together.
These few photos were taken yesterday afternoon as we walked to the cathedral.... can you feel the heat?  I can still. 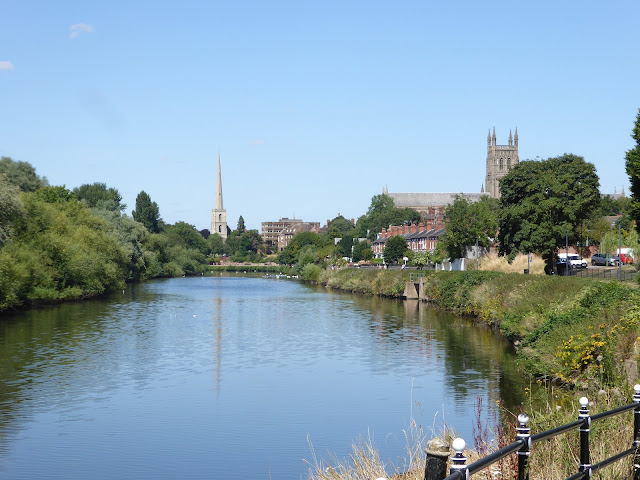 So this below is Bevere Lock, well actually we are through the lock and around the corner.  But I had been saying to David for over a mile KEEP LEFT KEEP LEFT for below is the sign the NB had missed a few days ago.  I suppose I can understand how it just didn't register with them, but at the same time on rivers you must have your wits about you at all times and your eyes peeled. 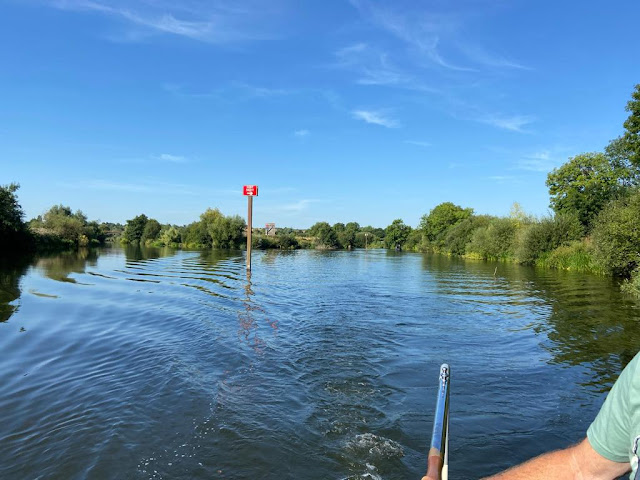 The trip was quite uneventful.  Not much wildlife to be seen, too flipping hot I guess.  We only saw one or two boats more.  I did some of the driving to relieve David of the boredom, but saying that we both this that this stretch is far more interesting than the much longer run down to Tewkesbury which in our view is deadly dull.
So we were as speedy as you can be on the river, shortish waits for the locks to open their gates and at Stourport I jumped off onto the pontoon to a) locate the lockkie.  b) prep the first lock but no lockkie in sight and so as David hovered on the river, in sweltering heat I ran up to the top lock where I could see a boat ready to come down.  I ran up to him in my life jacket in the extreme heat, asked the waiting boat if he minded us coming in the bottom lock which he didn't at all then ran back down to signal to David who was wondering what had happened to me...
Two locckies did appear from right over the other side of the basin where they had been doing some painting or somesuch as hardly any boats anywhere.
We wanted water, so waited while another boat completed his filling.  Curiously he also filled a water container to water his plants with, then a half litre water bottle he had at the tiller.  We were bemused that he didn't use canal water for the plants and indeed tap water for the drinks bottle but that's folk for you.
So we finally had filled up, did the deep single lock to get us up to the Staffs and Worcester canal and moored up in the shadow of a small pub and a few tall trees where the sun began to move behind quite soon after.  We'd thought of going on a smidgen but from coming off the river, completing the basin locks, watering up, the lock up to the canal and mooring up had taken almost as long as the river trip up from Worcester and I was bushed.
I have discovered that this extreme hot spell does not agree with me.
Is it my age? (Over 21).
Posted by Lisa at 08:47