The pride, the joy and the blisters

The next morning, the onboard 'youngsters' were up early and quickly went off to a 9am start of the NZ Women's hockey and I am sad to report I don't remember the result.  But we were meeting them later at Edgbaston to watch England Women's cricket against South Africa.
I had developed an aching knee, a sore foot and a blister after all the recent locks and a pretty long walk into town and back yesterday.  I was all for a taxi, but we had to walk a pretty long way to get to a road as certain access footbridges were closed.  Many roads too. So we decided to bike.  It was great idea, got the directions from Googly woogly and off we went.
Get to the first road and its all barriered off.
David asked the marshal "Can we go down there?"
No its closed
"But can we just go down there?"  He's plucky isn't he?  Now a police van had pulled out and a group of armed officers were getting out...  "Just on the pavement?"
No!
By now I was giggling, come on fatty lets find another way which was nicely down hill.  I have to say Reader Edgbaston is posh, very posh, huge big houses and even bigger cars all along.  We came up against another road block and this time the marshal said Cricket oh yes, down here, turn left, keep going on the cycle lane in the centre and its signposted.
Marvellous, straight there.  They had a cycle lane on the centre reservation of a dual carriage way. Bingo. 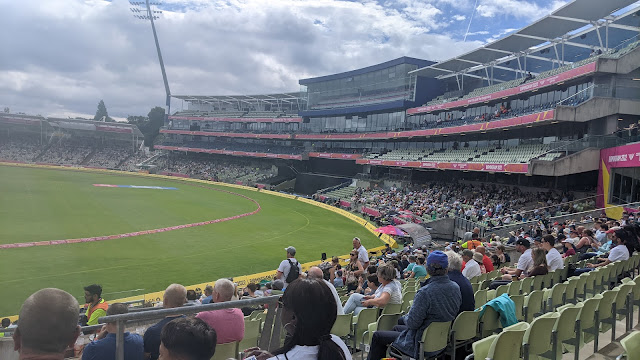 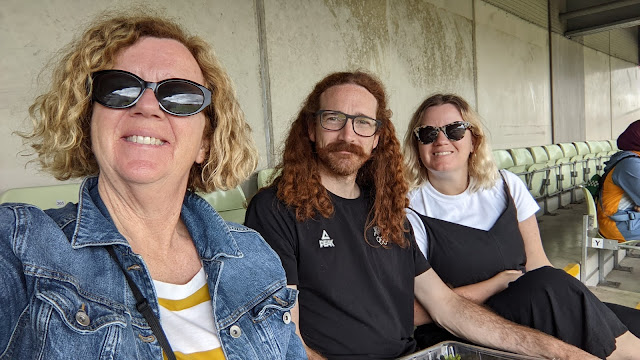 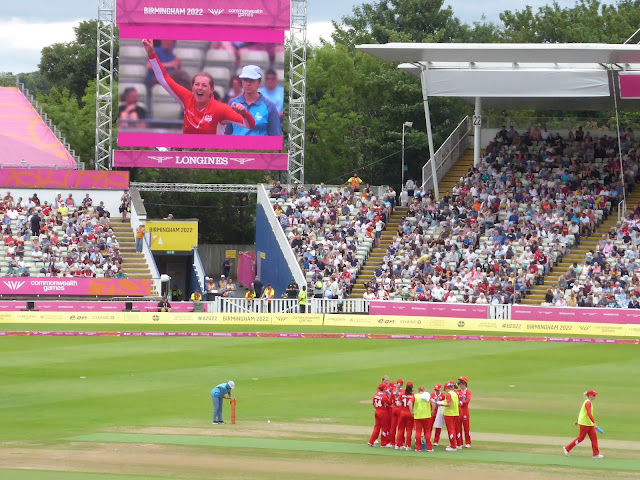 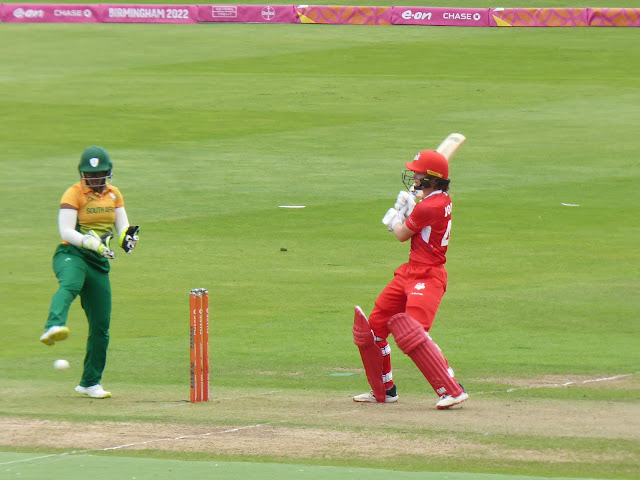 Verity and Mitch had picked up snacks on the way here so we had a jolly picnic and enjoyed a little sunshine too.  England won a very exciting match.
David and I cycled back, this time rather slower as it was uphill, but Reader after me not riding for months and months I was slow but didn't get off and push.
As I passed the helpful marshal who had directed us I thanked her saying she was the only reason we arrived there.
The other two had a much longer journey back due to the road blocks, they called in at friends on the way and we didn't see them till much later.
This mooring had been ideal for us (Marilyn) for the tickets we had for cricket and hockey both located in the south eastern part but the athletics were in the north western part at Perry Bar.  Its been a lovely experience, everyone jolly on the streets, the visitors from overseas and the volunteers who made it all so successful.
We all have definitely enjoyed it, maybe as much as Verity, my mother and myself did at the Manchester Commonwealth Games in 2002 when Verity was 14.
How time flies.
Supper was a very delicious invention of Verity's, fish curry.  She made it from ingredients in my larder that "needed using up!"
Tardebigge flight tomorrow....
Posted by Lisa at 10:10