So this morning being of the damp and grey kind David pulled the pins and slipped quietly onto the water point hoping not to disturb the sleeping crew.  We wanted to keep them as happy as possible for as long as possible.
For all those who don't know, Birmingham is up on a plateau so to get there and back involves a lot of locks, and in our case this am we had 36 on our list, the extra six would take us to where David had already popped their car.
So its about a two hour run to the flight, some of it pretty dull but some of it glorious green rolling hills.  As we jollied along the crew surfaced, we stoked Mitchell up with food, dug out the windlesses (or cranks as Mitch calls them).
Then Ready Steady where's the rubbish point?  It was blowy as we rounded the bend to bring us to the start of the flight and the service point.  Luckily Mitch has very long jumpy legs and and did the honours.

So a short way down was the reservoir that feed this flight of locks.  It is looking a bit low but maybe only a bit.  I had expected it to be lower after the lack of rainfall we've had. 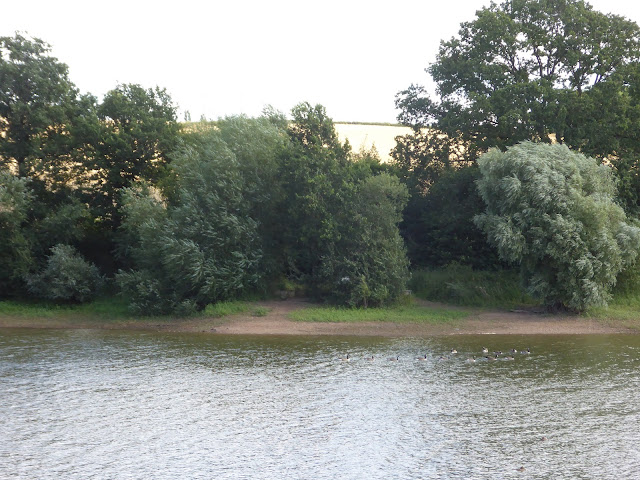 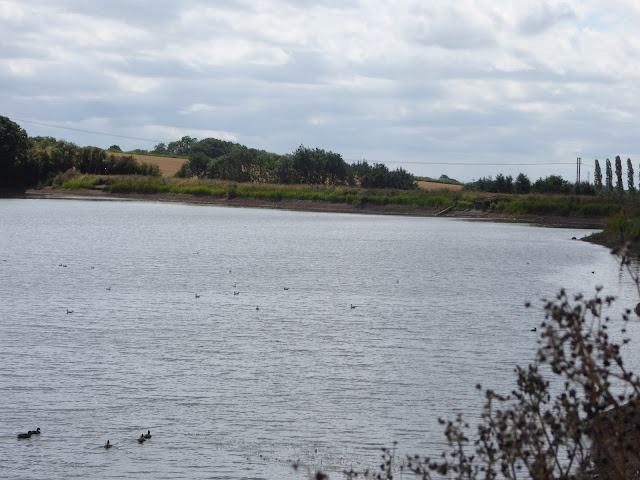 From here I could see a pair of grandparents with a toddler they were walking along the towpath with, another lady had a small dog on a lead.  Also but out of shot were an elderly couple painting the wall of this cottage.  As I got closer the ringing of bike bells was heard and two mountain bikers came haring down expecting and luckily getting the pathway cleared in front of them.
I was outraged at their speed, their lack of consideration and most of all their entitlement that this path was theirs.
Now Reader you know I am most compliant, a person, most  amenable and non confrontational, this has only been tested a few times but today was one of those times.
A third biker came down and I stepped in front of him causing him to halt but he wasn't doing anything like the speed of the previous two.  I asked if he was friends with the previous two and he said yes, well I let him have it with both barrels about what had happened, the child, the elderly, the dog and people who are deaf and won't hear a bell.
He agreed with me and said they weren't friends but he worked a the same place as them and he would have a word.
I calmed down a bit.
But I truly think CART have made an error allowing bikes/including bikes/re-surfacing for bikes.  Cyclist behaviour sometimes can be outrageous as it was today, I expect most people who walk on the tow paths can tell of a bad encounter.
Why are people on foot expected to give way to a vehicle?  A bike is certainly a vehicle, people are not.
I did manage to calm down properly eventually.
Yep I'm furiously again writing it.
The sun came out and the temperature shot up.  I was finding the going pretty tough to be honest Reader.  We were following a boat down unfortunately a couple with the lady helming and the man using a bike to open every gate he came to, as a lone boat had come up in front of them.  I didn't really mind of course as we had had luck at flights in the past. and they had a really good system together.  So I was waiting for them to clear then re-filling the lock.  So the top paddles were tough, really really heavy liberally coated with oil but just so heavy.  Crossing the beams just got me liberally covered in oil too on my new shorts.  A volunteer walked past me and sympathised with how heavy they are saying well we are always putting grease on them to help.
This I knew I was covered in the stuff but its not the problem.
We all paused on WaL for long drinks, a juicy peach and a loo break.  David felt the heat the most and before the bottom lock was ordered inside by Verity.  He meekly obeyed her, showered in cold water, ate a sandwich and returned for the last six.
Verity also went in after the bottom lock to start dinner, leaving Mitch and I to complete the 36.
Phew.
We passed the boat in front moored up and having well deserved beers, told them we were making FULL use of the guests. 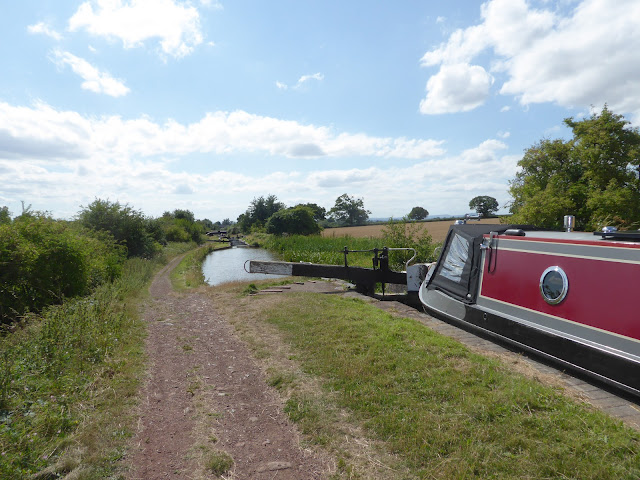 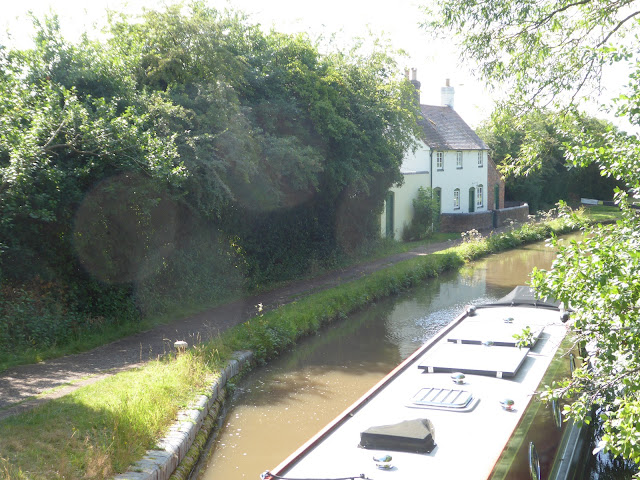 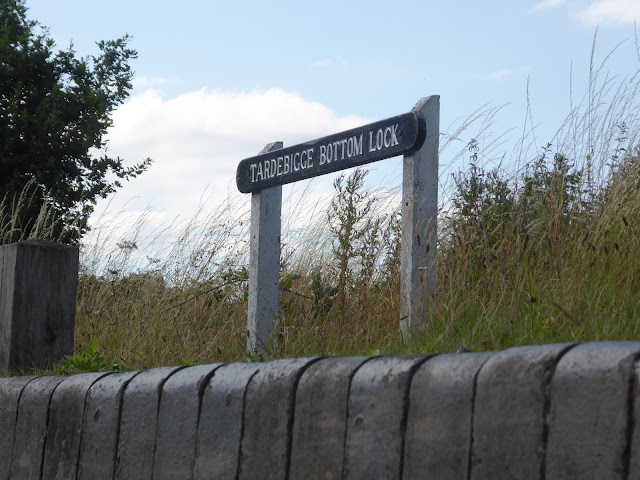 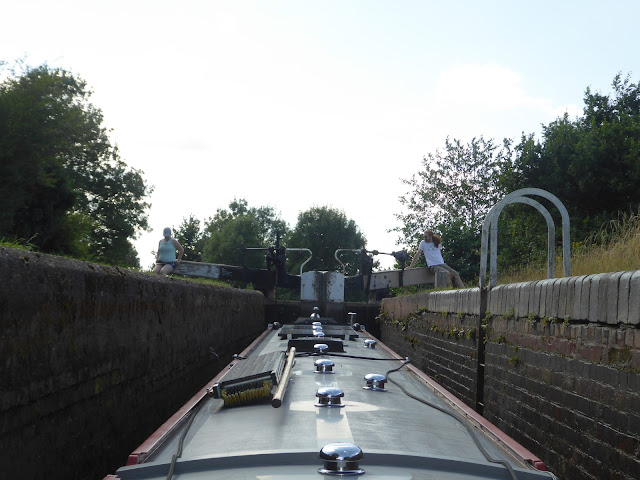 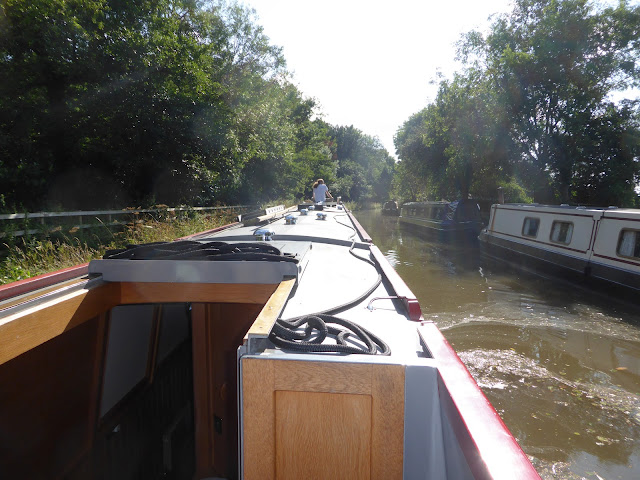 Photos are slightly out of sink.

We moored up at Stoke Works, a blip along from Stoke Prior where a big Hire Boat centre.
It had been a hard day followed by early nights all around.  Verity and Mitch left early-ish the next day as they are moving house soon and have a lot to do.  Moving to New Zealand that is.
Supper was chicken in a spicy sauce with broccoli and rice.
Oooh I forgot to say, started the flight at 12:30 and got to the bottom of the flight at 4:30.  We would have been a bit faster if not for the boat in front that held us up a wee bit.
Posted by Lisa at 10:39