A rest and a ride

So here we were at Stoke Works.  I had demanded a day off and I got that.
I had found the flight yesterday pretty gruelling.
This summer we have just passed WaL's 10th birthday which means I am ten years older and not getting any stronger plus I am blaming Covid too for my inactivity.  So yes back to gruelling and a day off.
David brought me morning tea and wisely left me to surface gently.  He had found Hanbury Hall a National Trust property on the map and it was agreed we should visit there.... on bikes.
I was nervous as I haven't cycled in a little while, or a big while.  But with tyres puffed up and a large bottle of water off we went with a slight detour to visit a church he had found this am.
St Mary the Virgin at Hanbury.  A really stunning place, the church sits atop of Hanbury hill over looking three counties I think it said with uninterrupted views in several directions.
I had to walk the last bit of hill but had pleased myself with my progress and my husbands patience too.

Then back down the hill for a whizz to the hall.  Not a great deal to say about this one. 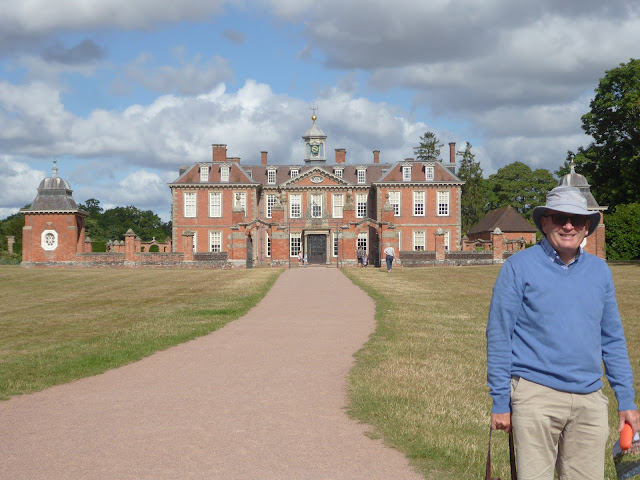 We had a light lunch in the warm sunshine then walked the bikes back through the park land where we had been told that the paths led almost directly to the canal, BUT NO CYCLING IN THE PARK, even though the path was a track for golf buggy type vehicles...  But we were good children and walked down the track, over three stiles, a challenging bridge over a stream with a stile at both ends which altogether made the short cut ages longer and shortened the tempers of us both.  Then you pop through a hedge and find yourself at the bottom lock of the next six.
These two arrived in the afternoon to fill and afternoon and to play locks. 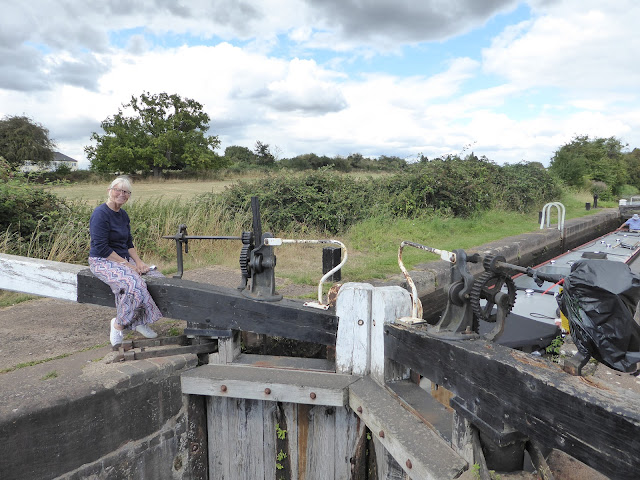 The hall was down hill all the way from the church and only a short distance.
That afternoon after the Boat Sharers arrived, we pulled the pins and set off towards Worcester.
They are waiting for NB Caxton to be completed had a few more days to go so while they were kicking their heels around they popped over from friends they were staying with to do the five or six locks Astwood locks.
Well its only kind to allow them to do more work as they enjoy it so much.
A very pleasant interlude.  During the rundown David (Mine) had got off with his bike, got to the car and brought it down closer to where we ended up, a gorgeous mooring that we had passed several years ago when we went up this canal instead of down.
The Lewis's departed again or rather we drove them back to their car at Stoke Work and also took them up to the church of St Marys to see the view.
They have to move onto their new NB in a day or two if all goes to plan.
Supper was feta, spinach and red pepper quiche and lots of salad then strawberry and peach surprise.
Posted by Lisa at 22:11