I predicted last night that we would be hard pressed to get through the Atherstone locks,  eleven locks they start off close together but then spread out.
I was correct.
It is such an attractive run up to the flight and again we haven't had the time to stop and explore a little more, in fact I think that between Nuneaton and the flight is the best scenery.  We would have moored up there last night but it was so ghastly hot that we by-passed the views in favour of shade.
Gently rolling hills, some wooded stretches and some view points over the valley.
Here below is a taster, note the grey cloud but such a relief to be cooler.
We arrived at the Atherstone locks with the welcomed sight of a boat exiting up the top lock and two volunteers in attendance.
Always nice to chat to these lovely people, but I do admit to being marginally disappointed that the two chaps stayed put at the top lock.... in the past when there have been a few on duty here, one may walk down two or three locks to lend a hand.

So here is a riddle Reader, before we arrived, the locks were full because a boat had completed the flight coming up.  We entered three full locks on our way down.  When I got to the next lock it was empty, completely empty and I "Gave" it to the boat coming up but who hadn't quite arrived.  Neither I not the lady on the boat NB 3 No Trumps, could explain the one and only empty lock, with no other boat having past either of us and she too had had to empty each of the locks coming up.
All paddles down and I am not buying the idea that it was leaky and had totally emptied itself.
Answers on a postcard please.
In talking to this other boat we both realised that 4 years ago we had come up the Anderton Boat Lift together.  Small boating world.   HERE. 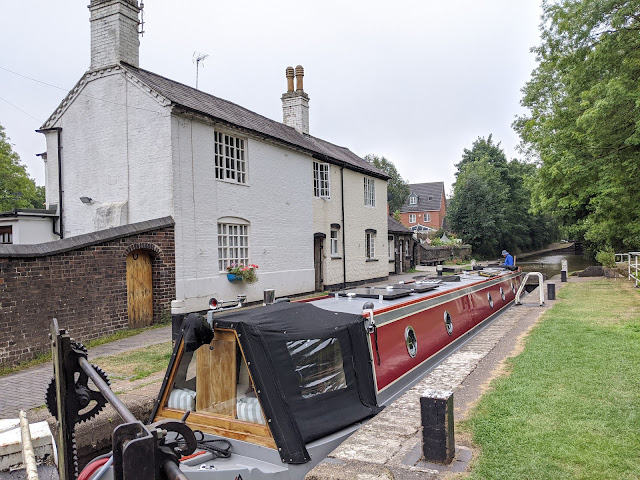 Well we stopped in the centre of town and popped into the nice Co-Op here, raced around, back to WaL and then moved off again, we had debated and faffed and thought as the forecast was to have full on steady rain at 2pm we'd have plenty of time to finish the flight before then, so I found the wet weather kit just in case and we set off quickly but not quickly enough and a CART work boat came past us as we were about to undo the ropes, inward groan, he was a single hander so he'd be bound to hold us up.
Nothing to do about it but go anyway.  I decided to walk the extended stretch to the next lock to stretch my back out a bit.  When I got to the lock a boat was coming up and the work boat was already ahead!  I ate my own words.
One lock done and the rain started, of course.  Well we carried on to Lock nine I think and called it a day, moored up and that's when I found out that I really need new wet weather kit.....
We stopped to the next morning and although rain was due we did set off and stayed dry.
Now some years ago I posted a photo of this hull.... I asked then when does a restoration project tip over and become a scrapage matter...
Worth saving now?  Presumably the owners have not the inclination or perhaps funds or else it would have been done. 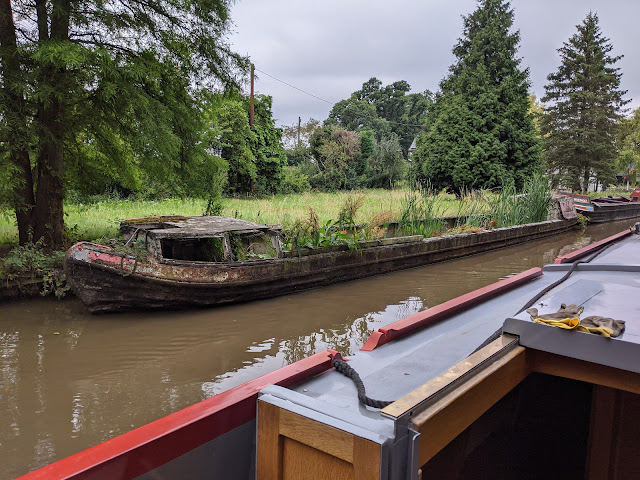 Not my taste as I don't like black.
Over the next couple of days, we stopped at Hopwas, and  Fradley Junction.  I was determined to call into the The Swan pub or known widely amongst boaters as The Mucky Duck.  Its changed hands quite a few times over the past years and I just wanted to try it out.  So we walked up to it, tables spread all over the carpark, waitress service, all looking good and then customers food started to arrive and that did the trick, we ordered, two fish and chips for £20 and it was delicious Reader.  They were very busy too so if you are close by give it a try.
We walked after lunch over the fields and far away at Fradley something I've not done before.  Most pleasant.
Stopped here the night and the weather the following morning was damp, we waited and pondered and dithered and eventually us and the boat behind decided to move, I walked to post a letter and the heavens opened, of course again...
There was a wait at both locks and by that time we were both soaked but carried on and moored up again almost at Armitage.

And finally the approach to Great Haywood with the hills of Cannock Chase beyond.
It's been a super time this cruise.  We've met up with Boaters that we haven't seen in ages and enjoyed some good weather even if it has been BOILING at times. 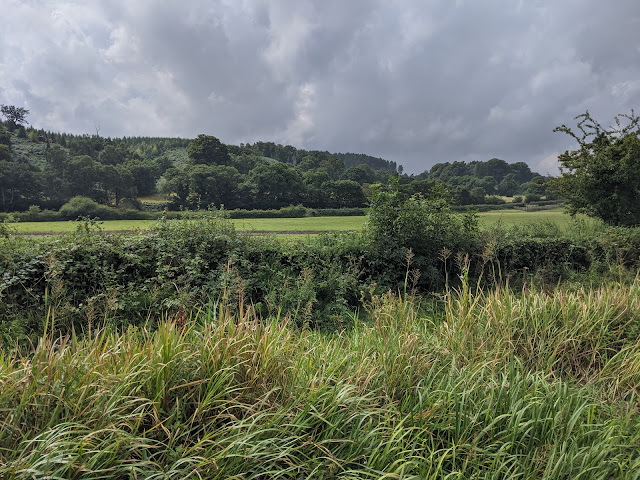 And look who is here Reader!
Well, if you are not familiar with this boat its called NB Whitefield.  It was built by our boat builder Fernwood Designs back before WaL was started.  The owners wanted it to have the look of a boat from the south of France.  It was shown at Crick too. Its had a chequered past, changing hands a few times already but now its come to live at Great Haywood. 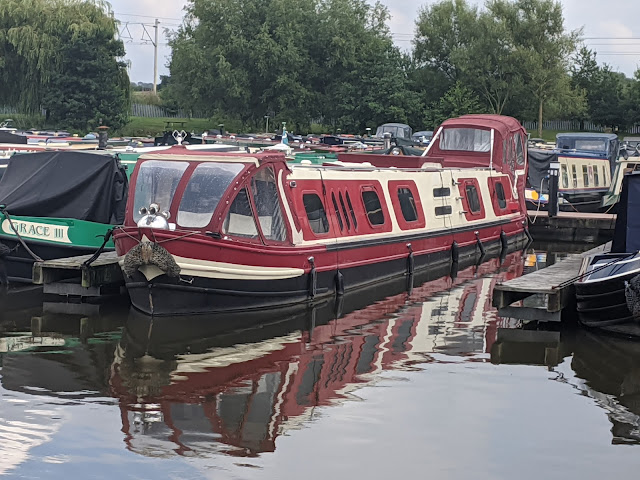 So that's us for now.  Home tomorrow for our Grandchildren's first birthdays.  How quickly did that happen?
We'll be back presently.