After the gloomy skies last night this was the promising view this morning.
After the tunnel clash yesterday David confirmed his choice to go very early through the Braunston tunnel, as its much narrower in places and has a handy 'dog-leg' too.

I had my down coat on plus gloves of course, and my stylish ear wrapper, I quite expected to throw layers back on the boat as we started the six double locks but no, it all stayed on it was so cold.

I standby with camera at the leafy run immediately before the Braunston tunnel as I have spotted Kingfishers there previously but it was too cold today for man beast and bird.

Delightful couple of senior gentlemen on a small narrowboat we passed in the tunnel, they called out it was their first ever tunnel and please excuse them if they were doing it wrong!  We both assured them that were doing brilliantly.

Now Reader have I mentioned that we have had a problem with the bilge pump?  Well it had decided not to work any more and we have been deciding who to call out,
David Lewis (Boat Sharer) or River & Canal Rescue well as luck would have it, as we approached the locks I was convinced that the lock had two boats in it about to  descend but as we approached we saw there was only one there.  A nice sight, as its a bit of a slog to do these gates alone.

Now this lovely couple who live in Braunston have a neighbour, this neighbour (Graham), works at the Marina at Braunston.  Now he made a phone call in lock four to Graham had us booked into the marina....

"Pull in on the pump out dock", when we got to the pump out dock there was a bit of a bun fight going on with four boats waiting or being served then one more from the very back of the marina one more wanted to get out and simply came on through....

I watched from the dock thank goodness as I get twitchy with all boats jostling.  I got talking to a charming couple who were from Norway and had a problem with their starter battery and had also been told to pull onto the pump out dock....

I wondered how we would fare in Norway at a marina explaining an engine fault.

In true "Visiting the GP" fashion, when the bilge pump was faced with an engineer.... It started first time.

Not at all annoying.


So after all this faffing we did finally moor up at about 2pm.  Quick lunch, grab the bikes and car keys and walk to the car which luckily had appeared in Braunston.

David has explored this immediate area fairly well and found a nice route for me...  a flat ride in this area of undulating hills.  We drove to Ashby St Ledgers, its very close to Daventry.

We cycled to Welford, David, (For the third time) got to a junction, he's always way ahead of me, failed to tell me in advance where we were going, he then hid behind a bush and so of course I got lost.
The other occasions I haven't had a phone either....
Not that I hold a grudge.

Doing a nice big triangle, we ended up back at Ashby St Ledgers.  Oh my goodness what a find.

Now the medieval manor house is still in the private hands of Lord Wimbourne so this was as far as my camera lens went.

But look carefully and you will pick out the gate house.  It is the very place that The Gunpowder Plotters met.

The manor a that time was owned by Kit Harrington's forefathers ( Now all you non Game of Thrones people Kit Harrington plays the hero Jon Snow.  Recently he played his ancestor William Catesby in the BBC production of 'Gunpowder', Catesby lived at Ashby St Ledgers.

Read all about it      HERE   But what a place, seeming untouched.


This is a long row of cottages dating back to 1908 and built by Edwin Lutyens.  I did my best to capture all of it but the best shot would need to be from the bedroom of the house opposite.
Quite a stunning row me thinks.

Lutyens also designed this pad... call "The Cottage" and built for the Dowager Lady Wimbourne of the time. 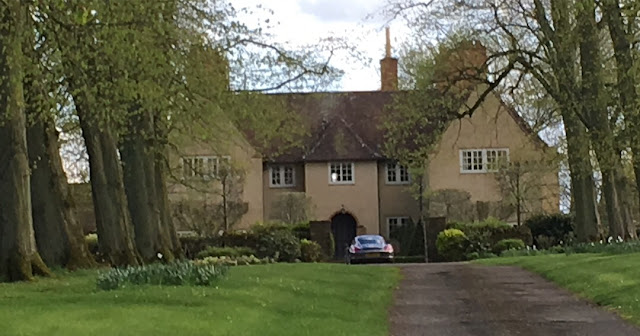 We had dwinks in the garden of the pub in the village, I was very tempted by the calamari starter but as it didn't serve food until 6pm, ninety mins away, we went home for another fridge clearing smorgasbords of Italian cold meats and cheeses possibly with an accompanying soave.

A rain filled day is on for tomorrow, marvellous.