So then we continue travelling southwards in a calm and dignified manner.

Now aren't these pretty?   They were just past a bridge, I was wondering if they had been "Planted" but as we continued along the Leicester Arm of the Grand Union canal there were other patches.  Cowslips grow on chalkland upland situations in our experience but here they are doing very nicely thank you.

Just around the corner and on a bit is the first of our three tunnels, Husbands Bosworth tunnel.  As we got close we could see a light indicating a boat in the tunnel, Oh wait for him to come out I said, so we did and all was well......
We went in then about two thirds of the way through we could see a light lining up.... I think he's waiting says I.....
He wasn't.

Now we have a sort of helping system aboard WaL in tunnels, David steers and watches closely the wall side, today we had the wooden boards running along our side so no worries, right?   I watch on the waterside and oncoming boat side.....

So I call out to this PRIVATE NB to bloody well get over mate as  we was veering across the water on target to hit us, now this tunnel is a fairly wide one as they go so hitting another boat is madness, but he was right on our side,
"He's going to hit us!"  I yelled to David, he kept WaL closely into the wooden boards but even so there was a nasty grinding crackling sound, the sort of sound that was loud.  Now they didn't actually make contact with us but all the same we were whooshed into the wall as he at the very last second veered away and that's what  made the grinding sound.
The other boat's captain called out a cheery "Good morning!" as he passed us  "Oh great" replied me.

Well we both expected that we would have a gouge the whole way down.  We couldn't see.

But what we could see is the is new South Kilworth marina looking a bit more  the ticket, it has water in it now and everything.  Actually the three boats in there are workers who live aboard, we have been told that they are testing the marina for leaks at the moment and the open date is this summer.
Last year some wag said that the workers are three years into a six month contract...


Farming News;
This tractor is direct drilling into the stubble, they have  skipped ploughing, this saves costs and can be beneficial to the soil.  Its a relatively new idea you would not have seen it 30-40 years ago. 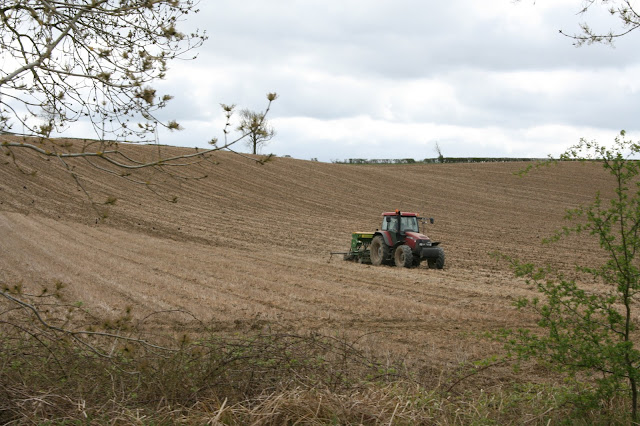 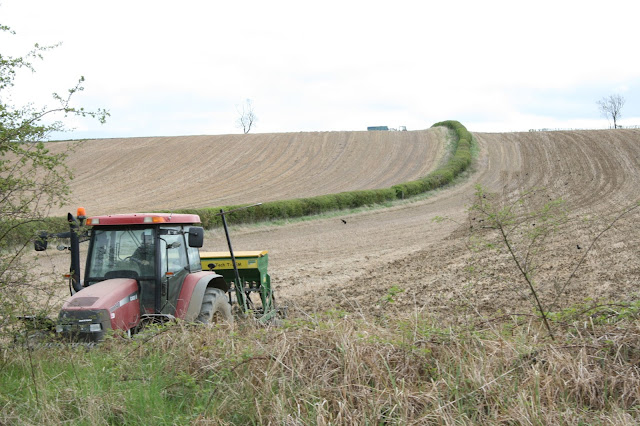 We moored up at the old favourite place bridge 22.  Its has a lovely open aspect and last year I was lucky enough to see many hares, not not this time, not one, not even a pair of ears sticking up out of the wheat.


We have been so lucky, this is the damage to the ghastly loud scraping sound.  The wooden boards didn't save us.
I have forgotten to close the hatches and the wall of the tunnel ground into it.