No no no that's wrong, try turning the map upside down...

We had a lull in the bad weather, more rain was coming and the gales tomorrow.
We went for a walk.  David googled Pub Walks in the Chilterns.

A National paper had done a feature on top ten best walks in the chilterns.

Well the nearest to us was starting and finishing at Stoke Row, about 8 miles away.  We jumped in the car taking G&C's macs in a rucksack and off we went.
It's a bad sign when you can't find the very first place in the instructions isn't it?

Well we did our best and asked two people who worked at the pub there at The Crooked Billet, both gave differing answers. The pub itself had one of those plaques on the wall outside, it had been used in the filming of Midsomer Murders.  We've seen a few of them.

Well we found a path and started off.  The sun shone, the birds sang and then the path turned in the wrong direction.


The instructions said to;

A walk with the promise of a meal and a drink at one of the most atmospheric gourmet country pubs in the area, where Kate Winslet celebrated her first marriage. The trail takes in woodland paths, rolling countryside and some sweeping views from Berins Hill over Oxfordshire. Don’t miss the Maharaja’s Well in Stoke Row, gifted to the village by the Maharaja of Benares in the mid-19th century.
Follow the trail north behind the pub skirting Bush Wood and Oakingham Bottom before joining English Lane. At English Farm, head west across Ipsden Heath (Woodland Trust) and on to Well Place. Then follow the Chilterns Way to Berins Hill before crossing the valley at Yewtree Brow and heading back east to the pub.

Join English Lane it says, but Reader when you get there it's one of a possible three lanes, none of which have any names on them.
Not at all annoying.

With the help of google maps when we had a signal we rather did our own walk.

David thinks the author is lazy, just sits at his desk in London and just makes it up with no respect to contours, certainly not having done the walk.

I just think he's an idiot.  I plan on emailing him and telling him so. 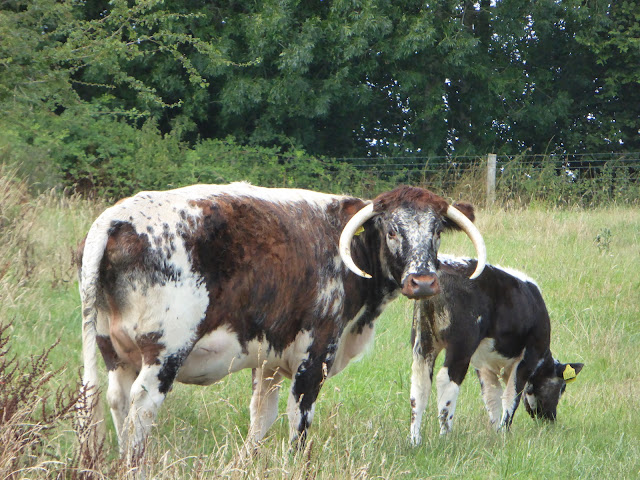 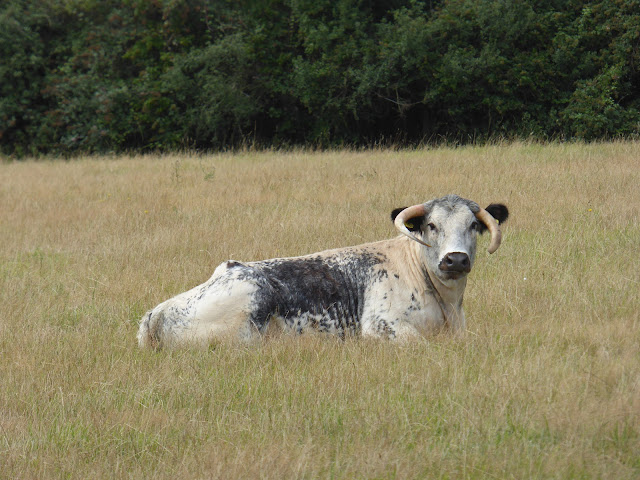 But this below is English's Farm.  I would say owned by a hobby farmer.  No machinery, no debris associated with real life farming to be seen anywhere and David pointed out hardly any fences.

Quite a few of these pets.  No one in their right mind would breed these commercially.  Although pretty. 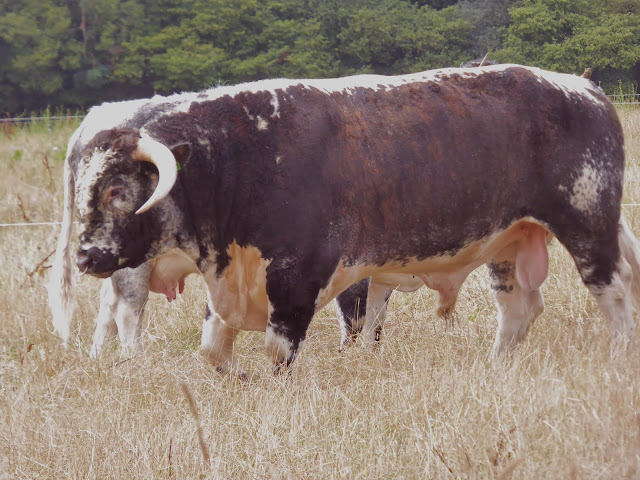 And I did see pretties too; 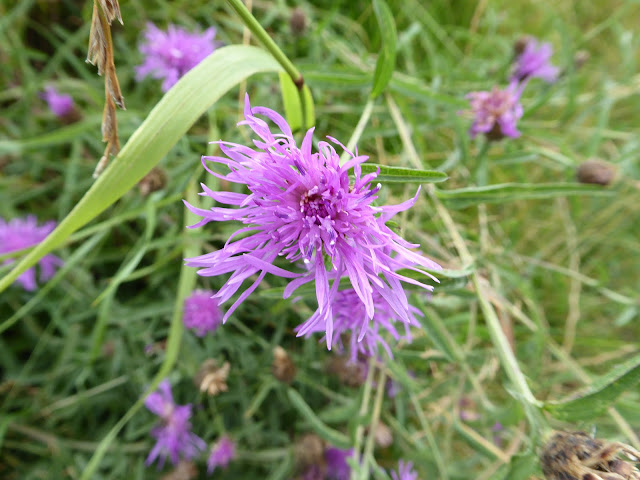 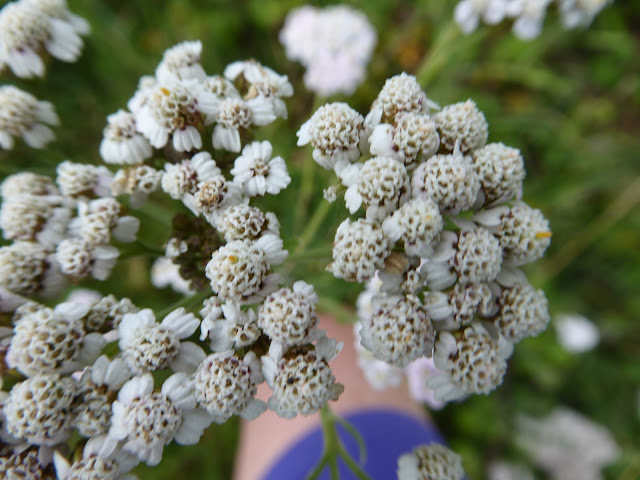 Way way off in the distance is The Thames. 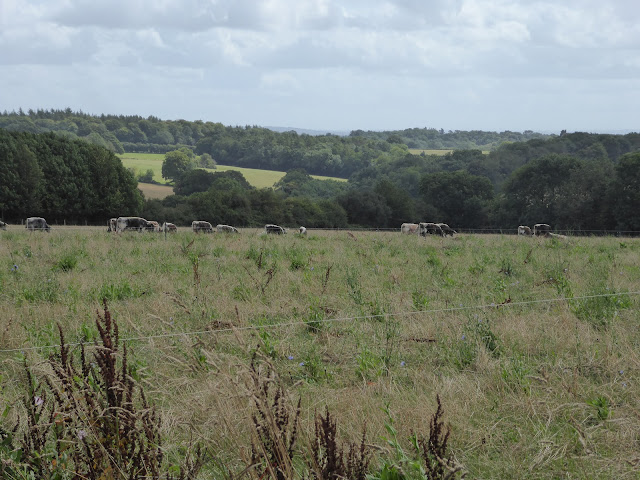 Someone rich has built this, stark white, on a hill in an area of outstanding natural beauty, amazing to have got permission, David was scandalised and as we walked further away and up another hill on more and more of it came into view.
He's still banging on about it... 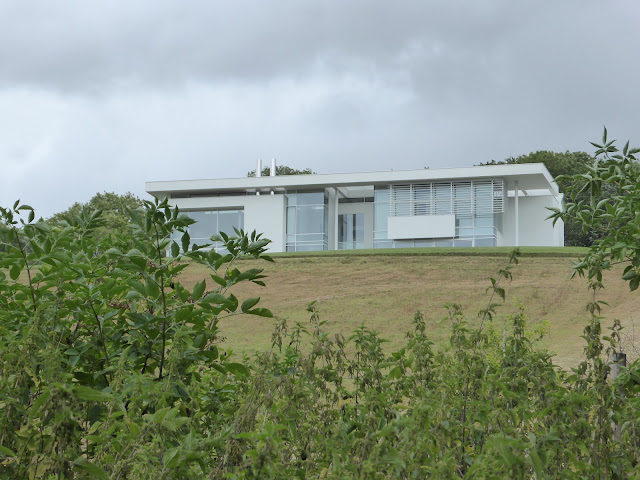 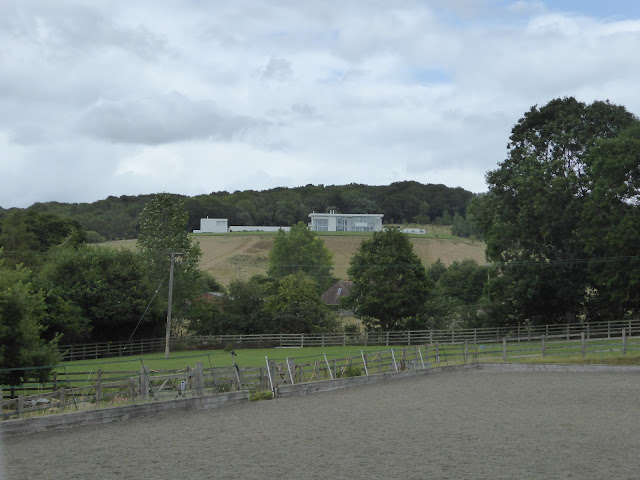 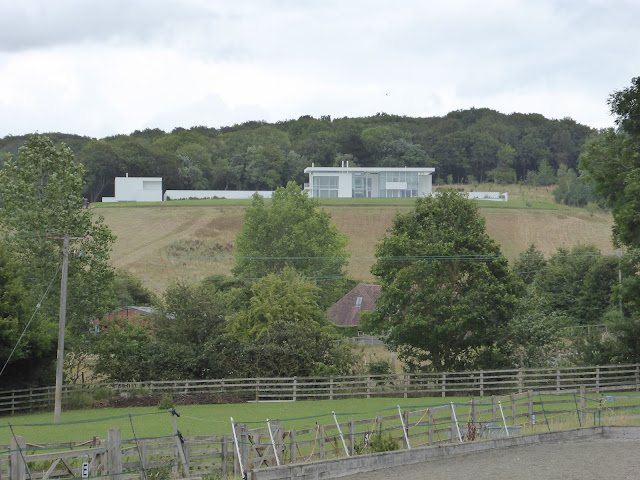 Now if you refer back to the pathetic instructions, we are now wanting the Chilterns Way to Berins Hill.  We never found it, instead we found ourselves in somebody's garden and hurried out onto another lane where, there was a board with a map on it of this exact area entitled
"FOR ALL LOST WALKERS"  I can only think that this idiot writer has been responsible for hundreds of lost walkers all over the area.
We were two more of them.

Well the heavens opened and I can testify that George and Carol keep good waterproofs.  We ended up back in the village of Stoke Row walking a couple of miles on a narrow lane in the face of speed merchant local drivers.

We passed on the pub but instead went to a village cafe which was delightful and served a very good flat white, salt beef and gherkin sandwiches  and raspberry & apple cake.

Home to SR.  packing and dusting filled the evening after we moved SR up above the lock onto the Lock mooring safe while we go north tomorrow.

In the morning we drove to Great Haywood where we met G&C and our beloved WaL which we haven't seen for three weeks prior to being on SR so six weeks in total.

Its been a fabulous three weeks, really fabulous.   David loves the Thames and SR is the most comfortable boat, (especially the bed),  we have received no end on compliments about SR and no end of surprised looks when we say;

Thank you to George & Carol who entrusted us with their Home, we hope we've taken good care of her for you.

We filled up the car with people and bags and drove south to Goring to reunite the owners.  David and I enjoyed our last lunch on the back deck of SR, with the beautiful views here then loaded the car up with our bags and away home to our home we went.

Those babies are due in two weeks and I can't wait.  Life is going to change again.  Change is good, it keeps you young.