From Henley up to Sonning

Yesterday I had a fine old day, reason?  David went home for the day to play in a charity golf day.  I didn't go as we would not have left SR unattended on a river, but in the event I spent a big chunk of the day in Henley, (I had a pedicure and manicure) so I suppose SR was left alone.
But there you are.

It was a lovely sunny day for the most part and I had a lovely afternoon reading and quenching my thirst.

The following morning the weather was grey and much cooler.
David had moved the car first thing so it was later than we really had wanted to when we set off.

I haven't really got a lot better at watching as a bridge approaches when we are on someone else's boat, I seem to be convinced that it isn't lining up in the correct fashion, that the driver hasn't taken fully into account the flow of the river etc etc.
I took these shots then found a reason to go down into SR where I found the stress levels much lower, this seems to go hand-in-hand with not watching.


Strangely, David quite likes it when I leave the rear deck too.  But it was all fine needless to say.

As we made our way to the left of the little islands in the centre of Henley's moorings, I spied this most attractive craft. I didn't look it up until a couple of days later when I zoomed in on the name.  L'Orage.

If you care to open the link you'll see that it is one of The Association of  Dunkirk Little Ships.  It has Raymond Baxter HERE  among its previous owners and along with two other gents he actually founded the Association in 1967. 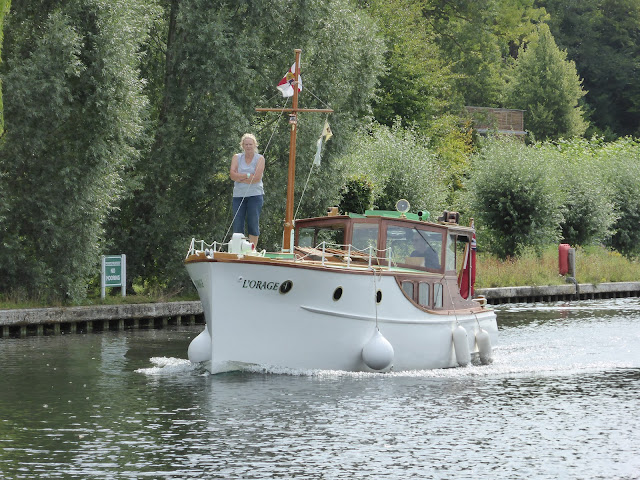 I had come to realise as we approached Marsh lock here at Henley, that this would be the first lock we had done on SR going uphill on our own and with me off of the boat having to operate the lock as it is on Self Service.  Although it was well after 09:00 today Marsh Lock was on Self Service.

I went ahead to help the descending boats.  Our turn to come in and I was pleased when the helm of a trip boat behind us had come forward to operate the lock for us.

She and her husband brought a sail away wide beam to fit out themselves a few  years ago and now its almost finished,  she was very taken with the sizeable solar panels George has on SR and was asking pertinent questions about them.

A short wait at the next lock, Shiplake lock and above the lock we serviced the boat that is to say emptying the cassettes, filling with water and taking the rubbish out, then on again towards Sonning.

During this shortish cruise the wind had picked up somewhat.  After Shiplake lock it was a little more exposed and a lot windier.

As we approached Sonning moorings, there was one space that we thought we could get in and one we knew we couldn't.
David approached slowly and my mind was running ahead in that this wind was blowing off of the land from the intended mooring place.
If I got off of the bow with the rope, there is no way I could hold SR on a rope while Davild banged in the stake, there are trees along the moorings but not one I could use now.       Then the wonderful sight of two other boaters coming forward to take the ropes.  Afterwards I saw that as we moored up that the wind had slightly changed direction and was now blowing in and holding SR into the mooring.
I was very grateful for the other boaters help, certainly very grateful that the wind had changed direction.  something else I hadn't considered beforehand.

We stayed in Sonning a day longer than we had planned as the weather forecast for tomorrow the wind was stronger than today and frankly Reader I refused to move.

We spent some time that afternoon with an interesting couple from another wide beam, the husband supplies equipment to gold mining in West Africa.
You meet such interesting people when boating.

So the next day was very grey but warm.  We intended to walk down the river but on looking at the sky we turned about and walked up to the lock for a snoop.

Self Service again.  Evidently in the high season the locks remain open on the weekends but the Lockies take time off in the week.

The skies darkened and we thought it prudent to take a detour to The Bull pub at Sonning.  Its hundreds of years old and serves good coffee.
As we picked a table under an awning for smokers the gale whipped up and leaves streamed across the table.  Suddenly the rain fell (sideways) like a monsoon and we decamped inside.
Seemed only sensible to have lunch.

Now I quite like Sonning, but, it has this beautiful bridge.  This wonderful bridge is single file for traffic.  This was about 3pm and its queueing.  Whoever would want to live here and constantly queue?


We walked after the rain down the Thames path side, there is another path here too the same side as the moored boats.

The evening was the best of the day.