I said five total not one way!

We had a lovely few days with the Fine Company.  Many laughs to go with serious consultations about paintwork, the need for a new paint job, (sadly this was dismissed by the other two boat owners), toilets, polish and just how on earth Del gets his boat (Derwent 6) to have such an amazing mirror like finish, it looks brand new, honestly brand spanking new, but no, its twelve years old.  Full credit to him and his elbow.
The next morning David and I cycled off.  I haven't cycled in about 18 months, I had my padded shorts but I was happy to go about five miles.  There was a farm shop and that was included in the ride, now David must have misunderstood me and we did 7 miles to get there but a shorter run of 5 miles back and I can tell you Reader that was way way way too far for me after such a long break.
I will not be cycling again for quite a few days.
But during the ride we passed by that farm that we had partially seen from the canal.  David was intrigued by the byres and the farmers wife told us that no there were no cows here any more, not for 45 years, but the barns were used now for lambing.  I asked if there were any plans for demolishing them but no definitely not.  Good.  Not many echos of former farming lives down our way.

It was FA Cup Final day between Chelsea and Arsenal (Del's team)  Al&Del had disappeared in to watch it leaving the four of us to enjoy a glass of but we could hear okay when Arsenal scored, they went on to win and Derwent's crew were jolly happy.
The next morning we all had coffee together before John and Louise made the move to leave first, they are on their way back to their marina a few days away.
We waved them off and hope that its not too long until we see them again. 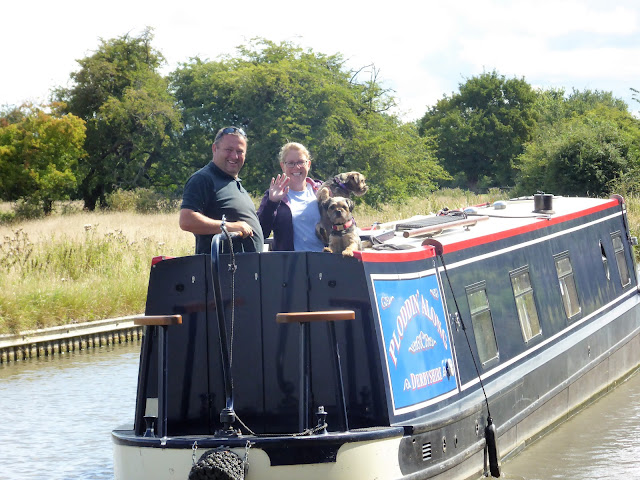 Off they went, you can see the two doggies, Jasper and the cute as can be puppy Lola.
We had the best time meeting up with old friends is the wonderful thing about boating.  We hope to see Derwent6 again when we return this way..... when.
Posted by Lisa at 21:24