So the grandchild is much better, his medication is finished and on our last day with him David and I walked him to his nursery and said a tearful goodbye as he waved to us over his shoulder.
That was me who was tearful not him.
We drove back to WaL, I think it was four hour trip, sunglasses on most of the way but as we approached Market Drayton the sky simply turned black seeming around one corner, as we approached Addersley the sky was positively thunderous and as we parked on the nearby bridge it fell down.
We waited.
The useful thing about popping home was that I took all our washing with me.  It was kind of a role reversal in that most children take their washing home and give it to their mothers to do...  I brought a small amount back wet but otherwise a successful task completed.
The car was also full of petrol once again, it seems the "Shortage" is confined to the south east corner of the UK and not many other areas now.  The first service station had a massive queue for diesel only petrol having sold out at dawn, David didn't really want to bother with another service station but as I was driving, (Slightly ironically but David does most if not all the boat driving and I do virtually all of the car driving as he makes me scream when he drives the car)
so as I was driving I took us to try the Warwick service station, not only is the petrol very quickly accessible there was not one car waiting.  We will use this station in the future instead of having to do a long drive just to get to the pumps.
WaL was fine after her weekend alone.  The next morning a few boats passed us in both directions while David moved the car.  We never leave the car at bridges for more than one night.  So we finally set off after breakfast and coffee.

We arrived at Market Drayton, watered up and departed.  We both would have liked to have had a nose about there but that will wait till next time.
It's the most lovely countryside on the Shroppie canal, that is when you can see it...
So nice for us to see "Black&Whites",  the sun came out and all was joyfulness.  Well doesn't your heart leap with views like this? 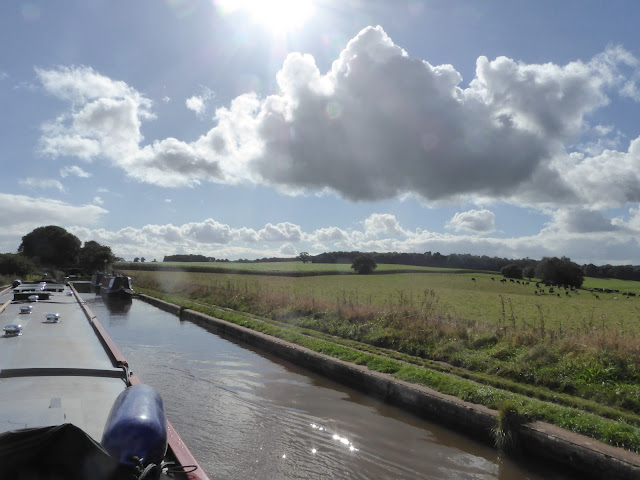 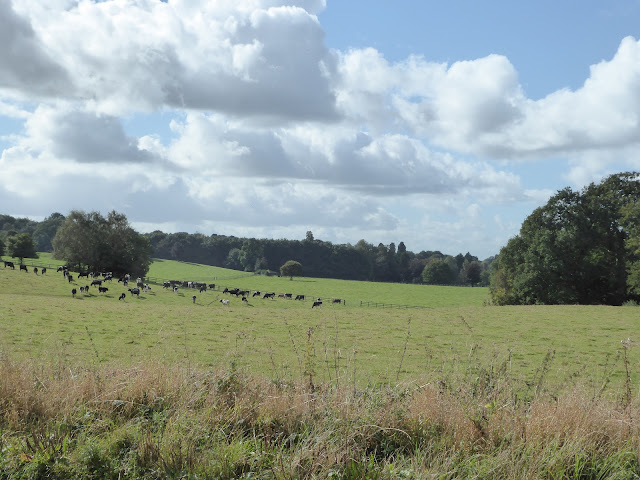 So farming news, harvest is over cultivating and drilling has began.  At home, a favourite view of mine when the corn is golden with the grass and trees olive green.  Every year I vow to drive there and photograph this view in harvest colours, needless to say I have missed it again, that makes about 30 years missed.  I just hope I remember next year, remind me Reader will you?

Pretty quickly after Market Drayton comes the Tyrley Flight, the bottom locks are in a cutting hewn from rock, very impressive, the towpath was thick mud, not so great on your deck. 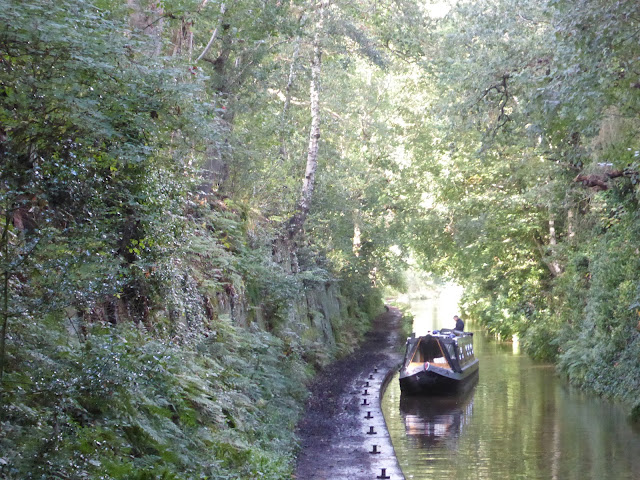 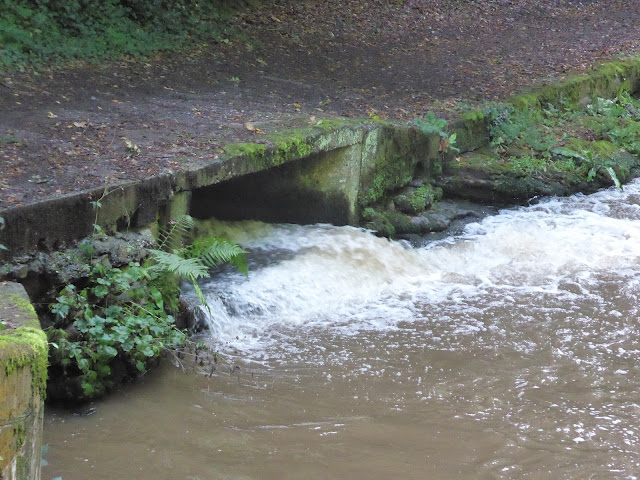 After the lock then its almost immediately into trees and the Woodsleeves Cutting.  Many love the trees and marvel at the work to have made the cutting, but I just think it was a waste of gorgeous sunshine and a bit deadly dull, but don't let me influence you....

The temperature was quickly dropping after we departed the trees, then a massive long line of moored boats, then a viewpoint over the rolling hills, shall we moor up here I said with sweeping arm movements to indicate the view, No I want to get onto Norbury Junction, well we were hoping to meet Steve and Chris from NB AmyJo at Norbury Junction there but no day was fixed upon yet, okay I said and went inside to let him get on with it.
Moments later, he was pulling WaL into a space, and in went the stakes.
It was now COLD but quickly hot showers were had and supper was served.
Sausages and french beans with peach surprise.
Posted by Lisa at 13:31