So today Reader I am writing this post on my phone, I started this afternoon and almost completed it when my phone rang, after chatting to a daughter for 15 mins I returned to the post and it had vanished.
Not at all annoying I can tell you.
So here is a second attempt, if this fails then I don't know what I'll say.
So the next morning David set off before 7am, he estimated that it would be an hour before my presence was required.  I arrived on-time and holding his coffee.
I was delighted to see an Egret on the canalside, I scrambled to get my phone camera but he flew off but landed close to two herons!  I have only ever seen individual herons never two before, I've often wondered about breeding...
So Marilyn, I tried hard, but this is pretty much as good as it gets this autumn for colour, a vague yellow in the centre of this bush. 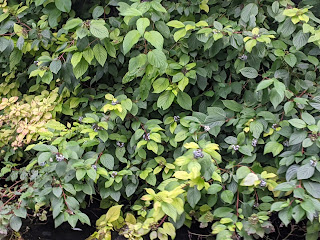 So here is the stop lock that marks the end of the Shroppie canal and onto our favourite, the Staffs to Worcester canal.  We are turning left towards Great Haywood and our marina there. 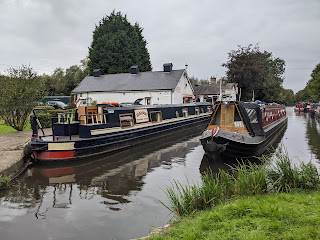 We carried on to Coven, the sky was quickly filling in and the forecast heavy rain wasn't far away.  On arriving at Coven there were two workmen cutting bricks finishing laying a patio, dust was everywhere and an earsplitting noise was awful, but they were using an electric cutter so I figured they wouldn't be long doing it.  It was spitting as we moored up and pouring as David finished putting the tonneau cover on the back.  We dried off and went off to the pub here, the Anchor.  Never stopped here before but George said it was good.
So it turns out the manager has just changed.  It was a pouring and cold Saturday, the wood fire was set but not lit, we ordered and I asked the waitress as it was cold could the heating be switched on?  Oh yes he's just done it.  Well the food arrived and we sat in our coats as did most of the other customers.
I asked again about the heating as the plates were cleared, oh yes it's on..
I went to the loo and on my way touched every single radiator on the place and none were on.
The man next to us said the old manager would have had that fire lit, this one won't.
Well it was a truly average meal and we went back to WaL to get warm.  We stayed there for the rest of the rainy day and guess what, those men were still cutting tiles and bricks in the wet.
Another early start this time to half fill up with water at Gailey, then off down the locks no other boats about and the lock needed turning.
I usually walk these close together locks and just as we got around the first bend a hire boat pulled out in front of us, we hadn't lost anything as we still had to turn most of them.
They were Swiss, spoke German and had hired seven times before.
A lovely morning really, a bit slow as a bit of a queue had developed but when we landed at Penkridge we were one of only three boats.
We'd made a booking for The Littleton Arms in the centre of Penkridge, we never go past Penkridge without going here, kinda regretted going yesterday but the country needs us all to go out and spend our money post Covid.
It was warm there, I'd taken a cardi, a  vest and a coat just in case.  The food was very good.  Curiously we have noticed that yesterday and today the extras on the menu were all potato types, mash, chips, sweet potato fries and new potatoes, but the Sunday roast had four veg so we both had that.
Absolutely delicious.
So the next day we dropped down into Great Haywood, another cold and miserable day only brightened up by the arrival of John and Louise from NB Ploddin' Along.   You may remember that we spent a fun filled fortnight in May with them on the GU.  Well they got petrol and came over for lunch.  I fetched out the recently discovered champagne from its hiding place at the back of a cupboard behind shopping bags and Louise and I very much enjoyed it.
After a tasty lunch of fig feta and red onion tart we played cards until they had to leave.
Sad to see them go.  and sorry I don't have photos of them to put up you see Reader, we have left the boat, unpacked and packed again arriving today here in Devon, as three months ago when I was out at my mother's David did a jolly thing and booked a hotel on the beach here in Devon where we plan to do a small amount of the South Western Coastal Path, we have done odd sections over the years but as I type this there is a monsoon outside, if it's too wet tomorrow then we will just stop in the spa here.
So when I get home and have my laptop again where all my photos are I'll post again.
But this last 2.5 weeks have been brilliant, meeting our good friends, four sets was the icing on the cake.  The Four Counties Ring was very enjoyable with a good variety of countryside and towns, flat and locky.  We've lived it and would easily do it again to stop off in the places we missed this time.
PS please forgive the font size issues, I'm so bored of this now....
Posted by Lisa at 23:45