So Reader I'm not entirely sure what has happened to the layout of this edition, but boredom and lack of interest prevents me from spending one more second trying to rectify it, that and downloading all the photos while I did my make-up, cleaned my teeth and made the Boat Polisher in Chief coffee then to have a slip of the finger and they all disappear....  so bare with me and normal service will be resumed tomorrow, perhaps.

So on the Farming news front, below you will see maize drilling has taken place along these parts.  Maize is a type of corn on the cob for dairy cows and Cheshire is a big dairy farming area.  Maize likes a fine tilth, dry-ish and then nice warm sunshine.  Well we have two out of three.

In yesterdays posting near the beginning I included a photo of a tractor pulling a trailer of silage bales over a bridge, lets not comment that I think it was too heavy on our heritage bridges but silage also is winter forage for dairy cows.  All this makes May and June very busy for dairy farmers.  Not so weather dependant as hay making back in the last century or when my husband was doing all this palaver but safe to say he does not miss farming (and I ask him regularly). 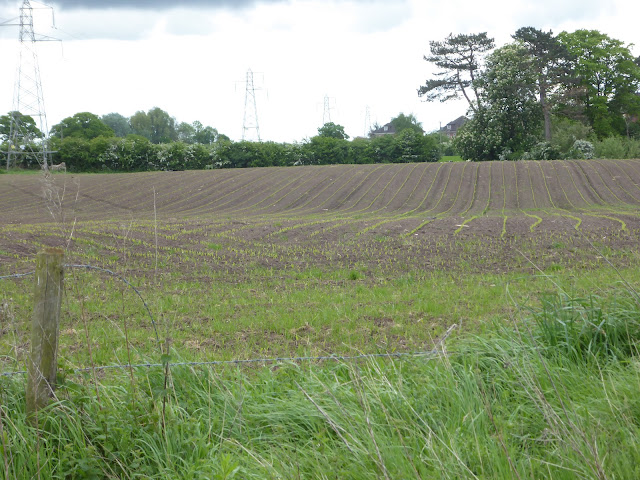 We made our way along the most attractive Middlewich Arm, a small canal that joins The Trent and Mersey canal to The Shropshire Union canal a bit like the figure H with the Middlewich being the line between the two uprights.
So one lock later  (That had a nice volunteer in attendance) we rounded the junction onto The Shroppie.  Its changed a bit since we first came here, now houses are built right on the junction and a busy road runs parallel to the canal. 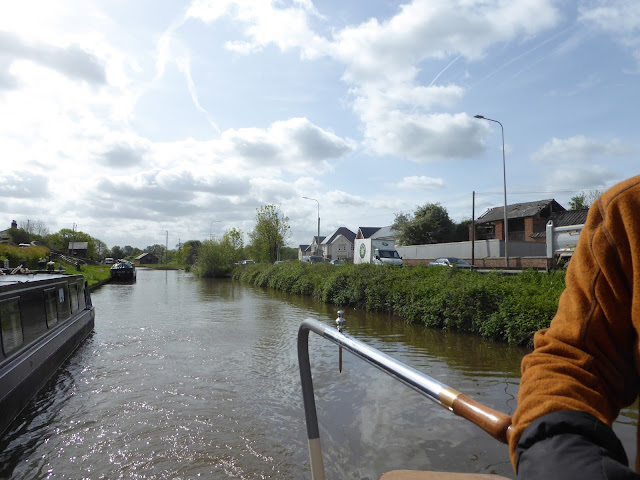 We continued along mooring up near Bunbury Locks, a staircase of locks.  There's an Anglo Welsh hire base here, more about that later.
We jumped in the car and set off for Beeston Castle, several years ago actually six years ago in 2016, it was David's birthday, that day we sat in the very hot sun in the garden of the pub here called The Shady Oak and admired the view.  This time we were visiting properly.
Googlemaps directed us to somewhere else entirely, David's old fashioned road atlas had the castle in the middle of a myriad of lanes, in the absence of any road signs its a miracle we ever arrived but we did. 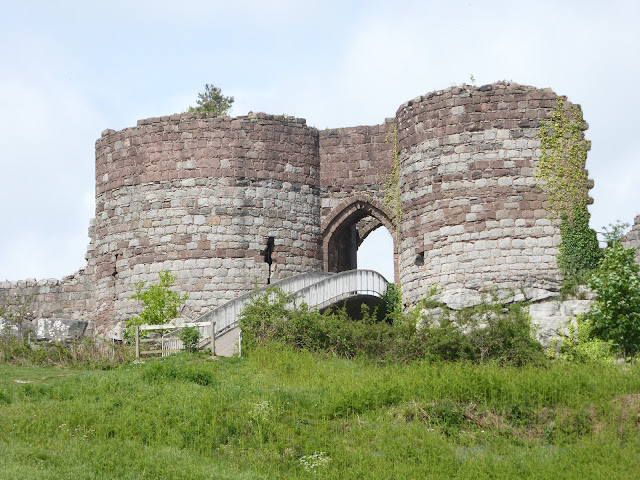 It was built in the C13th and stands on this sandstone ridge.  You can read more HERE  But Cromwell knocked most of it down during the English Civil War bless him.
It was a bit hazy today but below are the views for miles

The hilltop still has dense woodland all around it, in a clearing English Heritage have built an Iron Age Round house.  I was irritated that the door although supposed to be open had been locked by the volunteer and the window spaces had their wee wicket fence shutters fixed in place.

I was further irritated in the cafe that you can have a cream tea served with tea or served with an Americano coffee but not a Flat White coffee, I mean who makes this stuff up?  Only the British could.  It was the last scone unsold too but the computer said "No".  In the interests of fairness Reader I am often irritated by the National Trust too.
"Scone-Gate" aside it had been a great trip even if there had been a howling gale on the top.  We drove back to Bunbury village and its gorgeous.  I could retire to here and I don't much like villages.
We arrived at the locks and a sizeable crowd had gathered.
Now pay attention Reader and I will try to explain what was occurring.  Two boats were alongside each other coming up, one it has to be said was a Hire boat with a novice helming  plus a boat was going down,  all this under instruction and supervision of the Anglo Welsh manager.  So it means that one coming up boat goes forward when the middle gates open, the second boat moves over to the space vacated by the first boat, the boat which is coming down goes forward into the space newly vacated by the second boat.  The shuffling starts aided by the managers foot to get the two boats going up alongside each other again, ropes attached, then the gates close and both the top paddles and the very bottom paddles can be operated.
(All this can be demonstrated at home using soup spoons), anyway add to the mix spectators, dogs on too long leads getting underfoot, fairly high winds and the novice helm taking fright and you may get a flavour of the entertainment.
Oh I nearly forgot to say that here is a rather large fallen tree just as you approach the top lock restricting manoeuvring in the wind and a privately owned NB waiting on the lock landing who's owner had no sense of humour, should have seen the inevitable consequence of having his pride and joy moored right where the stern of both boats would need to swing to avoid hitting the fallen tree.
David said to him well before he twigged "Don't worry its a contact sport"  this made me laugh but not him.
Down at the very bottom of the staircase flight were two hire boats waiting to come up, dressed as French Maillot's (Have I spelt that right?  French sailors) were they were on the beer already, a stag do.....
So although we had enjoyed the Lock performance we got our comeuppance as in good time one of the hire boats and walloped us at speed, white water flowing behind him as he went at 90 degrees to the canal.

Who said boating isn't fun?
Supper was salmon with tender shoot broccoli.
Posted by Lisa at 17:49