Well the time had to come, we were going to move Still Rockin' today, yes that's right, actually go cruising.

We remembered all the preparatory tasks but I think I did mine in all the wrong order.  Lastly helping the baby opps sorry David into his life jacket how can one man continually put it on upside down after all times he's worn one on all the rivers that we have been on?

But with butterflies well and truly flutter-byeing in my stomach,
we crept off of the mooring.  We were on  the tiniest of bends and within seconds a lone rower was baring down on us, David couldn't quickly see the hooter quick enough and the rower was sitting with his back to us so in my best rowers voice I called out;
"I say old chap can you stand by one little old second?" he did and a nasty incident was avoided.

So on we arrived at Clifton Lock, where with the aid of binoculars I could spot the lock keeper puttting on his lifejacket, they open at 09:00.

Well we had a nice little chat, until two years ago he had zero boating experience, in fact he was a retired Police Officer attached to the Serious Crimes Unit, bit of a change in direction I would have said.  A charming man, who confessed a liking for the general public, my own dear husband's business involved the general public and now I would say that they bring him out in a rash, but that's folk for you.

He wished us well with SR and off we crept again.  I spotted a Kingfisher but of course no photo.

I almost relaxed but then the canal narrowed a bit and I got all petrified again.  David trying to distract me pointed out things.
So I say either a juvenile Cormorant, or a juvenile Shag, but very happy to be corrected.

So we landed about two hours later at Days Lock.  We had been her before with the wonderful "Yars" as I still call them even if today we should change that   Lesley & Joe  and their new NB Steadfast  HERE.

David had no memory of us walking up the Wittenham Clumps, but I was sure he was there too.

We went walking, the main reason to stop here, it was hot, super hot.  Up Wittenham Clumps (as in hill).  As we approached the Clump, the lower meadow had been recently cut for hay, the margins had been left and the air positively buzzed with the sound of insects and butterflies were surrounding us.

From the top the views are wonderful. 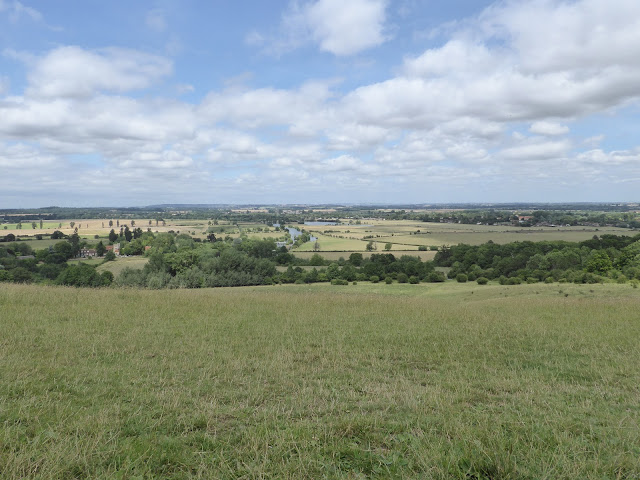 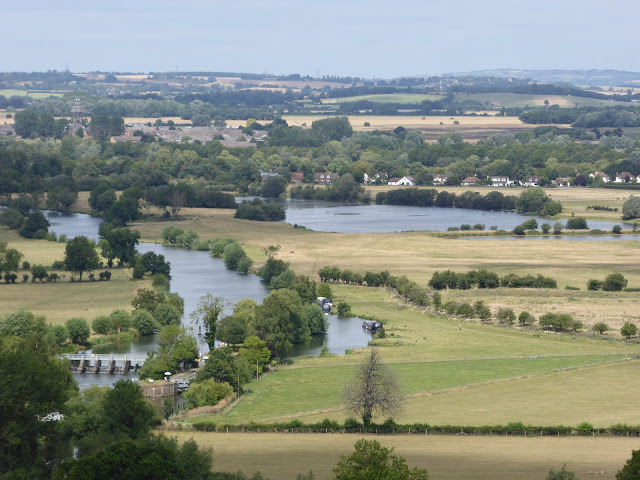 So looking past Days Lock, you can see a large pond or small lake.  These make up part of Bishop's Court Farm, this is now for sale.
HERE
The owner is asking £5.6 Million for almost 300 acres of grazing land.  What you are paying for is the extension potential.  The owner has only owned this for three years.  I guess its a type of asset stripping venture.

The owner is also the man who has single handedly antagonised the local village of Dorchester by installing a series of fences to previously unfenced meadows to a large extent cutting off access to the riverbank for villagers who have enjoyed this for generations.

It amazes me that the fences haven't been cut, ours used to be and we are nice!
Well if the current owner leaves lets hope the villagers get their access back and I won't have to clamber over gates again.
The gates had ripped off signs, I wonder if they said
"No Clambering"?

We got back to SR hot and sweaty, I was tempted to swim but it was full of weed so I had a shower instead.

Supper was mango and coconut chicken.


P.S.  We thought this was about the silliest warning sign we've seen, David suggested that the trees might fall on you when it wasn't windy....  If you've seen a better one let me know 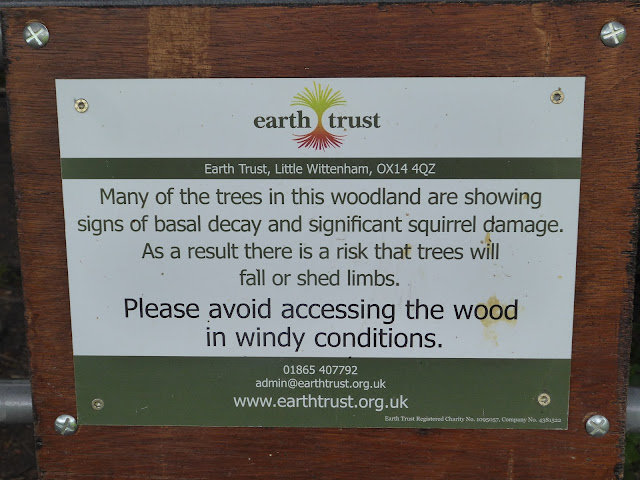