Do you want to stay here or move in this heat....?

The morning was clear, blue, very sunny and warm already.  We knew the forecast was for another scorcher so we had already decided to stay put.  Even with the back deck cover it was way too hot to be cruising for me.
We did a joint Supermarket Sweep and stowed it all before it got too hot then out with the swimming kit, chairs and books for another relaxing day under the trees that certainly involved people (and boat) watching, I could hardly get any reading done such was the variety to watch.

Then this whooper arrived, suddenly SR felt much smaller.


Then this shot past at speed with two grey haired folk at the wheel and made all the moored boats move a lot. 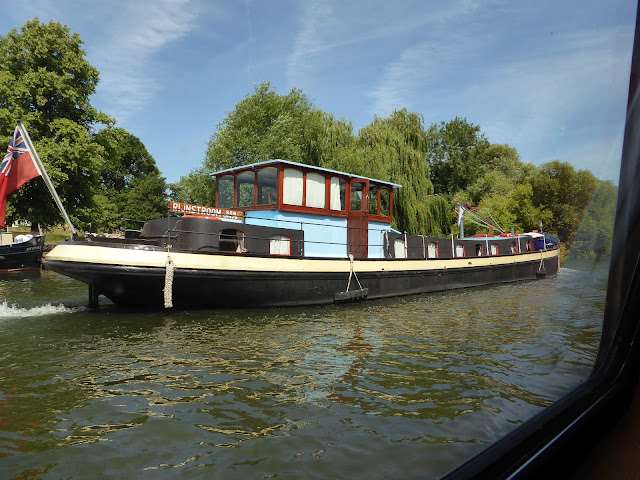 HERE     This Little Ship went past too.  If you open the link you can read about her service at Dunkirk plus comments form previous owners who have had custodianship of her over the years with their fond memories.


Below on the right hand side of the photo is
NB Daydream Believer.  A pretty interesting chap who owns this is an Ex-Pat who went abroad to Swaziland on a Gov aid job yonks ago to do with map making and stayed there.  He described it as the most beautiful country a bit like Wales but with better weather.  They spend their British summers here and then return to Swaziland.  He says it has a small tourist industry and they want to keep it that way so don't tell anyone.

That afternoon this NB arrived and was unfortunate in not securing a mooring, David and I were swimming otherwise they might have breasted up (I already had asked George if he permitted it) so they popped their boat in this gap.  At the very least they had good shade.  Much later in the early evening they departed. 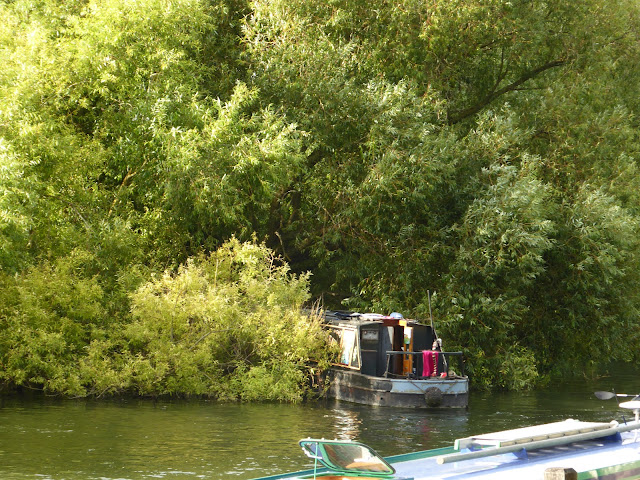 David and I sat out enjoying life till gone 10pm.  It's so rare that you can do this in our country, I guess five times a year.

The next morning and the last scorcher to be forecast, this arrived.  The African Queen, I mean just look at the size of her.
Last year here, we were chatting to a lady who had a small/medium cruiser and they had been moored up at Sonning, several locks further downstream when this arrived and he Captain saw fit to have his engines on until 11pm blasting their cruiser with fumes, nice eh?  Last year I scanned the EA website but I could find no licensing clause about late night engine running as CART does (CART overseas the canals and the EA, Environment Agency does the rivers).
Today he wanted to moor up for an hour while his customers went shopping in Wallingford.....  But try as he may he didn't get in. 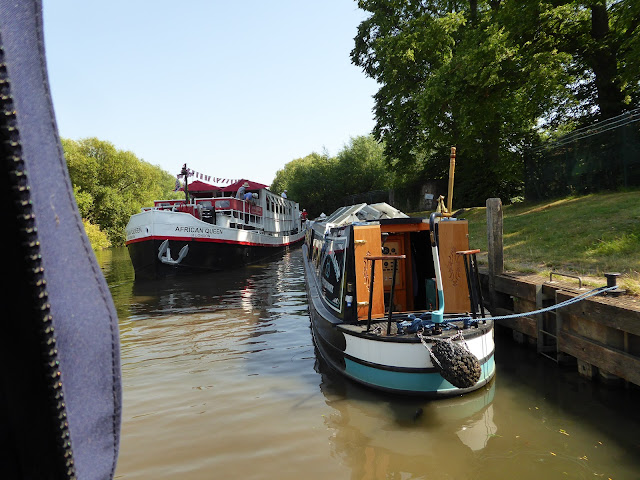 So the end of our third day in Wallingford.  We very much like it here and have enjoyed our time here again.  The limit is three days so we are away in the morning early.
Our water is very low and Cleve lock has a tap for us.

We want to get there before the exodus I feel the change in the weather will bring.