So we arrived back on WaL just the other day, it was sunny and warm and I thought that it was a good idea for David to have packed four pairs of shorts.

Its lovely to arrive back at the boat after a three week break at home, its like arriving on holiday without having to go through the airport trauma.

David pleaded with me for him to do the fridge loading,
he says I am illogical in food management, he says I never put anything back in the same place twice so nothing can be found, he says food goes rotten in the back of the fridge because nobody knew it was there.
I say he is a fridge nazi and whats wrong with opening the door and throwing the cheese in from across the room anyway?
I went to make the bed.  I am rather fussy with the bed, I have certain sheets for on top of the mattress and certain sheets for between us and the duvet, I like hospital corners where possible too.  David would use dust sheets if left unsupervised....

The next day he disappeared all day to play golf with John from NB Ploddin' Along.
I was delighted, I had asked him if he wanted to play two days links golf..... in Scotland but he declined.

I had all sorts of nice things lined up for me to do but in the end did a few jobs and only read my great book for an hour, sprawled in the sunny cratch on cushions drinking tea.....
I like him to play golf.

Later that same evening we met up with John again and his lovely wife Louise at The Mucky Duck in Fradley (Otherwise known as The Swan).  There has been a change of ownership since we last were there and the food and beer were good.
Sorry John and Louise not to have done a selfie of us all.

The next day was windy (Boaters hate the wind Non Boaty Readers) but we left Kings Bromley Marina.  Lovely people here and a lovely marina too.

A quick run down to Wood End Lock and a quick chat to a lady volunteer who has been doing a water management survey here, on a couple of days a week for almost a year.  This involves noting the amount of boats using the lock, to check the wee gadgety thing on the wall of the lock.  This gadget knows when water level drops in the lock and then tells the other black gadget on the towpath this which in turns notifies the computer in GCHQ.
So as no data has been collected since the 1970's, its all to check if water usage matches up with boat numbers..... I think.
Got that? If not read it again, or ask the nice lady a Wood End Lock before the end of the month.

Well on and down into the Fradley locks and I can report that Shade House is still on the market.  The Lockkie here told me its at the knock down price now of £235K due to HS2 coming close-ish by, however on looking quickly on RightMove its on for almost £600K, lovely inside and has a fabulous setting with land surrounding and a mooring with a paddock.


David making the turn at Fradley Junction from the Trent and Mersey onto the Coventry canal. 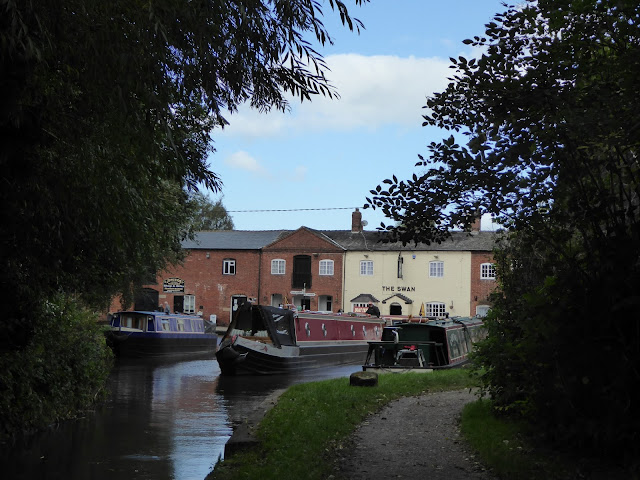 Although as we arrived at Fradley the lockkies said all the action had happened in the last hour, when we had filled up with water on one of the two empty water points and nobody had passed in either direction, we were cheeky and gave the boat a sluice down with the hose, I squirted water liberally on WaL whilst David followed along with a soft broom and swore at me when he accidentally got splashed,
Well?
Who wouldn't?


Yes, the great british unwashed got one side done.  More to come later.
Posted by Lisa at 16:02