It's that man again and fairies.

It's a rare occasion when I wake up with my husband in the bed, but that was the happy occurrence today.  The car was already in the correct place so D was next to me and still asleep, that bit is the miracle as he's mostly awake well before the Larks.
I too was awake and suggested to his surprise, shock even that we jump up and do the flight, it was about 06:30.  Late last afternoon a boat had come down the flight, the husband was on a bike Lock Wheeling and complaining that they had had to turn every single lock, so all the locks could be empty.  Very much to our benefit.
Now to my mind you either do a flight at Silly O'Clock or you start off when most boater are starting out so that you meet boats coming in the other direction.  If you don't understand this then a) Read it again and b) You probably haven't done a long flight yet.
So that's exactly what we did.  Dressed in a jiffy and unclipped the rope clips, or nappy pins as I sometimes call them.
There is water after two locks so we can stop there and fill up.
Well would you adam and eve it???   The very same lady suddenly appeared with the lively Cocker Spaniel, this time walking along with her windlass to also do the flight early.
Again I apologised to her.
"I've just said to my husband it's that man again" said she laughing, well I think she was laughing.
It's dreadful to admit but the first thing I said to David very quietly was that there was no way we were stopping for water now, (Had we of let them past then us instead of them would have to turn every lock).  I did however lift the bottom paddle for her behind me to aid their passage a smidge.
So below we have the Shroppie Fly pub, we didn't go in this visit but I really want the pub to pick up and be successful but  it needs a bit of investment and someone who is good at interior décor.
David is in the lock coming up, and on the seat was a man in a very relaxed sprawl for so early in the morning, as I passed him I asked if he would be kind and close the lock gate for David as I walked on and around the corner out of sight to prep the next lock.  He said yes with a smile so on I walked, and to my amazement here was a boat rounding the bend, so we all got to have open gates.

I was very annoyed by this green and cream boat on the right.  It had been moored using pins or stakes, exactly where the bank was fenced off asking boater not to moor there because the back is damaged and falling away.
But his pins had been pulled damaging the bank further.
Likely because of the boat moving with the water when the locks are used.  I guess he couldn't be bothered to the other three locks to find a better mooring. 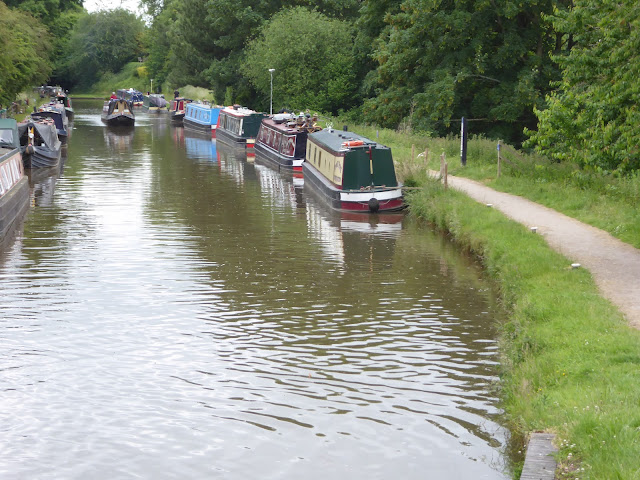 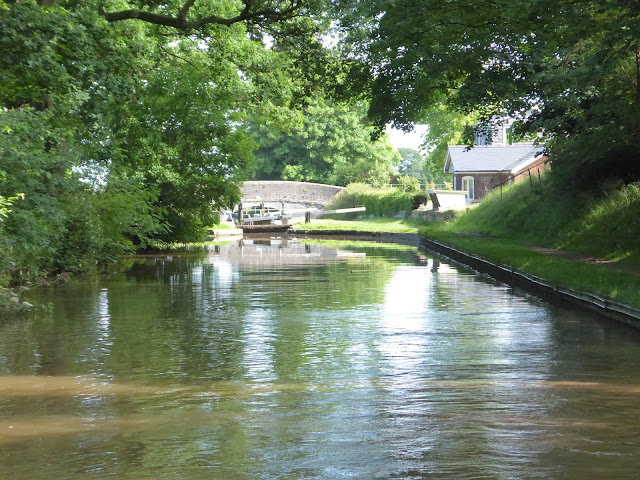 The very last lock and here we were at the farm where the farmer's wife bakes all sorts of goodies for us to put money in an Honesty Box.  Today they have a card machine so D followed him into the kitchen to flash his card where the wifi is.  He needed his card as I brought; 4 shortbread biscuits, 2 almond slices, two scones with jam and clotted cream, a pork pie and two ice-cream tubs into the freezer for Friday which was going to be a scorcher.
All totally delicious and highly recommended.
We showered, changed and got onto the bridge to await George to pick us up. This turned out to be a real treat as we were only really expecting to meet up for coffee but we stopped at their house in a nearby village, Carol jumped in and away we whizzed to Trentham Gardens   HERE .
We had the most lovely day with a good catch up, lunch, coffee and cakes and the most scenic walk around the lake here.  Then later back at theirs only going in for a cuppa George with his usual magic produced supper!  All in all a really special day and a big thank you to you both.  We'll come again!

But for me the Fairies  playing on Dandelion Clocks stole the show. 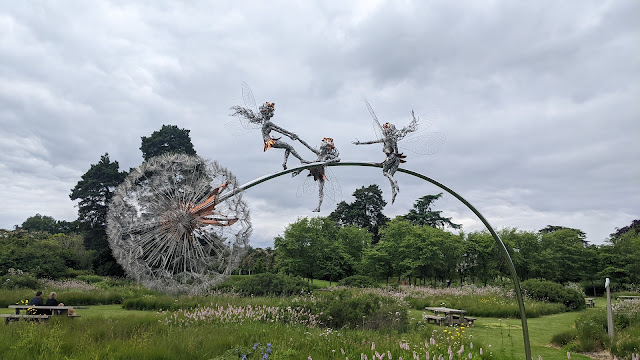 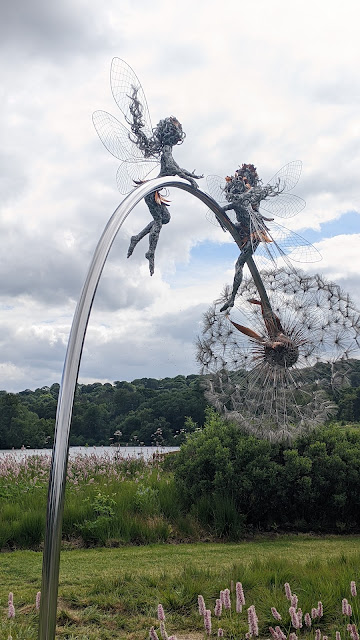 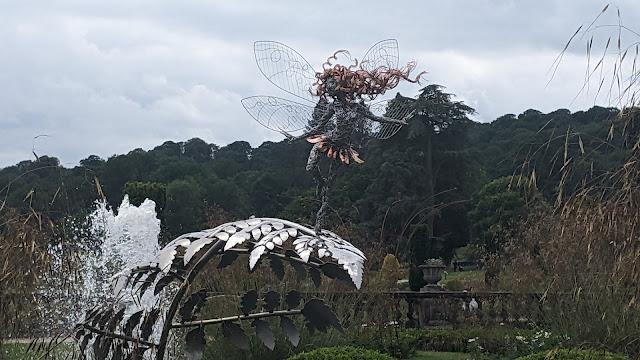