A long day but a good day.

We trundled off in the morning, a cold morning too.  We were under the trees at the top of the Audlem Flight, why would anyone ever moor up under trees is beyond me, my husband knows better than to ever suggest it.
David was off early to ferret the car away in the next county and I got WaL all ship shape and Bristol fashion.
I heard a boat a little after 8am and poked my head out of the window and chatted briefly to a single hander in a vintage boat of vintage years (The man),  I asked him what time he had set off and it was 05:30, lovely it was he said no one about and I can set five locks ahead of me.
Yonks ago we did similar on the Tardebigge Flight as someone had come down late in the evening the night before.
It's a short run from here to the Adderley Locks.  I'd like to say the lady with the lively dog arrived just after us but no.  As they passed us yesterday morning after we had moored up, we promised not to do it again.
In fact we didn't see them again, I reckon they put a full day in to make sure they stayed in front.

It got hotter and hotter as the morning went on, just look how pretty the dappled shade is....  We stopped very briefly in Market Drayton for milk eggs and bread and were on our way again as the cricket got exciting, yes I can hear you thinking can cricket ever get exciting, well yes in our house as England were playing New Zealand, frequent flyers to this blog will remember we have a cricket MAD son-in-law New Zealand who was watching from his home and had to go for a walk at the end of the close and hard fought match, (England won.)
As the cricket was on the radio on the bridge I sat in the cratch with my feet up with the side rolled up loving it, I like watching cricket but not listening.
As we approached the last locks to do, the Tyrley Locks, just a few but in times of rainfall these are very tricky.  but today a breeze.  a whole line of boats leaving Market Drayton, the Russell Newbury Engine Fanatics were having their rally, so an exodus probably to escape the noise of those engines.
The pounds looked a little low but there was still water running down the By-Washes. 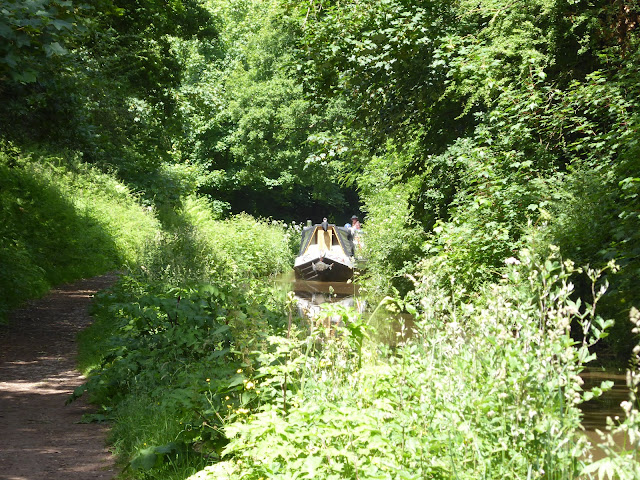 We carried on after topping up with water again at Tyrley top lock and set off almost immediately into the cutting which I find deadly dull, but today made much prettier by way of the sunshine.

We carried on and on mooring finally at a patch of countryside, no one around except the sheep.  Completely blissful.  It was a long day for us, about seven hours. 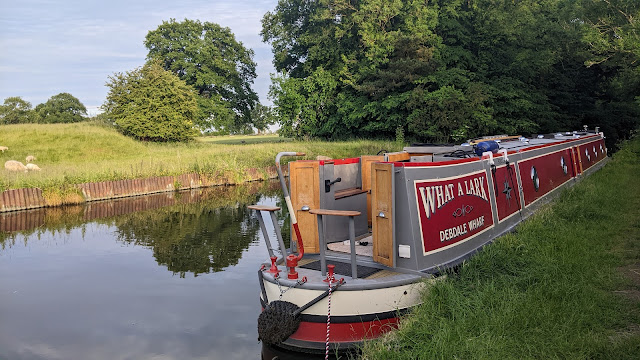 Supper was salmon with asparagus and French beans and cake.
Posted by Lisa at 22:04