Oh boy this sun is a bit much, but hey the boats are all pretty today.

By the time David got back from the car run the sun had come out properly so we stayed put.  I seem to remember a football match England v Denmark...
We got chatting to the couple on the boat behind, we talked toilets, well we listened and they told us about their toilet.  It's a gas toilet!
Now I had heard a small amount about gas toilets, but frankly Reader I thought the concept was a April Fool's joke.  I mean would you sit atop a gas burner????
But, it seems I was wrong, firstly all products are incinerated to an ashtray and in the winter the loo seat is warm to the touch!  They insist there is NO SMELL at all,  their boat is a gas free boat apart from the loo so it costs a gas bottle every month to six weeks or theirs does.
I still reserve judgement though.
We didn't share our recent story.
So we made our way to Braunston with the intension of going down to water up and drop off the rubbish and as we crept past the moored boats "Hey David!" we looked over our shoulders and there were Patsy and Tony form NB Pedal.
David breasted up against them and we yakked and yakked for a good few hours.
We had first met them on the Kennet and Avon canal back in 2013 when we were lock buddies on the dreaded Caen Flight.

WaL slipped away at about 8:30pm save disturbing all the moored boaters in the morning when a very early start was on the cards to avoid the heat.
We moored on the North Oxford canal miles from anyone and the next morning very early we set off for Hilmorton.
On we went to Hawkesbury Junction and The Greyhound pub, (I had steak and stilton pie and the pastry was beautifully crisp underneath).
We had moored up button to button, as we always do on popular moorings and here there were not many spaces, I had thought the wee boat in front of us was unoccupied but no the owner returned with two carrier bags of shopping.
I spoke to him apologising if he felt cramped but he was fine.  We chatted about how Covid had impacted him and other grandparents who hadn't seen their families for months and months, his own grandchildren are in Wales and he didn't fancy the train journey yet.
His boat NB Bosley was a wee thing 27'9".  He said his daughters are unsure that he should continue this boating liveaboard life but he said it keeps him young.  Then he very sweetly said how pleased he was that we had moored up behind him, wasn't that nice?
Crack of dawn, to avoid the heat, we crept away as silently as we could so as not to disturb the nice gentleman.
Much later in the day we did the Athlestone Flight.  Now it was a Wednesday, and on a Wednesday there is a group of volunteers who are a Great Gang of Guys.  They have been together years having fun away from all wives and wifely supervision.
I had a right laugh with one chap, but I said that on a different trip the three volunteers stayed at the top lock, which although I don't feel that the volunteers should just be doing the lock wheeling all day, it was a bit disappointing he simple said make sure you come though on a Wednesday!!  So that is my advice to you all.
Walking down to the next lock in the town two ladies said how much they liked my skirt.  Nice to hear I must say but this was the second time that day.  David says the third time as he had complimented me too.  Now this skirt is years old.  I had told David that I was going to buy myself two new summer boating skirts as these two I have date almost back to the millennium.... almost but now I have delayed their humane cull for another year.

We moored up near Willingdon to avoid the worst of the heat.  I sat in the shade of the boat trying to hide from the sun, it was scorching, in the end I went inside WaL.
Two amazing boats and their paint jobs in the region of Rugby, firstly  this one, NB Scribendi   HERE   its a library boat specialising in poetry, out of shot was a film crew there too. 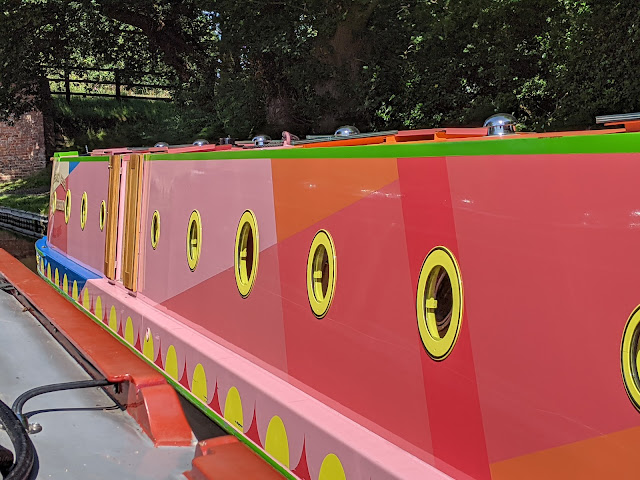 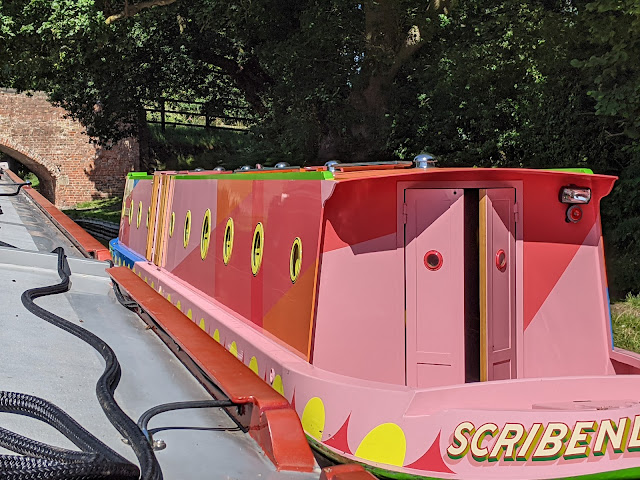 and the other one;
I don't think this one was a "Special" boat like the one above but I thought them both really stunningly gorgeous.  I wonder if Adam would call them "A bold choice of colour"?

The next day proved trying for David.  He started off with a 20 mile plus bike ride to put the car back into our marina then cycle back to Whittington, then hours helming the boat in the hot sun, with drinks and a good hat.
We were aiming for Great Haywood, but the heat and sun proved too much and with the sight of a straight bit of armco north of Rugby we suddenly stopped and David just wilted and had a good sleep inside the boat as it was just too darn hot.
It's such a waste of good weather, we've all waited in the cold for so long then all of a sudden it feels like we are on the equator.
The next morning and again early to get to the marina early and get going home on the road.  At Colwich lock which is often a bottleneck there was a big queue mostly due to a paddle being out of action.  But we were told that the day before when the paddle broke there were queues of two hours at one point.  Can you imagine how David would have coped?
Below is Holly.  If you haven't heard of Holly, have a peep        HERE  This lovely young couple have done this attractive Day Launch up as a cafe and have a Vlog instead of a blog.  I had recognised them yesterday in Rugeley centre in their canoe and exchanged a few words with them.

So finally back to our Marina.  We prepped the boat for our departure and then later we headed home.  Not sure when we will be back, there's David's birthday to be celebrated, a new grandchild to be soon welcomed, so it will be a while till we are back but lets hope for an Indian Summer so we can come out and have more fun.
Does anyone know if the Four Counties Ring is going to have closures this autumn?
Bye for now Reader.
Posted by Lisa at 13:08