The next morning was glorious.  Hot and then it got a bit hotter again.

We set off and delighted in the unfolding countryside.
It was David's birthday.  He was very young today.

The first lock we came to there was a boat about to go into it and one just exiting this way so grand.   Charming couple and we did a couple with them.  This lady had a wheezy chest so in the heat I hurried along the towpath to the next lock just around the corner, in the hope of having it prepped before she got there.

I rounded the bend and hailed to the two ladies emptying the lock that there were tow boats approaching, backs kept firmly towards me....  "EXCUSE ME!!!!"
Oh its half empty now, if I had of seen you coming I would have let you have it, she said with a forced smile on her face.
It was only a quarter empty now.
Yeah right! I said and sat down on the bench.  Call me old fashioned but I would never have taken a double lock in the face of two boats arriving.

To rub salt into my annoyance there was only one boat coming up.

Anyway, it turned out to be "The Iron Lock"  so called because the walls are made of iron, not built by bricks.  It has warped and so the walls are now not straight and when two boats have been alongside one another they have become wedged so now the signs say one boat at a time.  My annoyance subsided.
Really Reader I am a most calm and good tempered lady.
This is the iron lock below, now distorted so one boat only at a time. 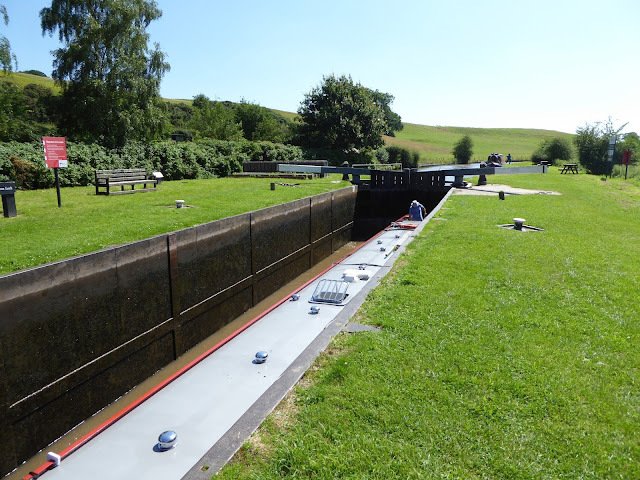 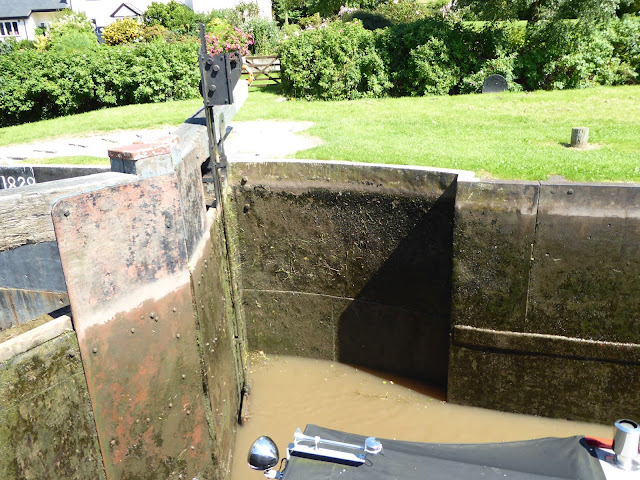 Along this stretch was this narrowboat with the biggest floral display I have ever seen.  Stunning.  David wondered if the blooms might impede visibility. 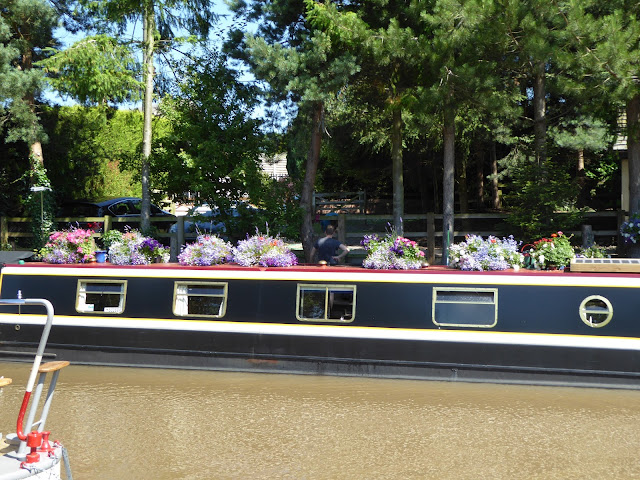 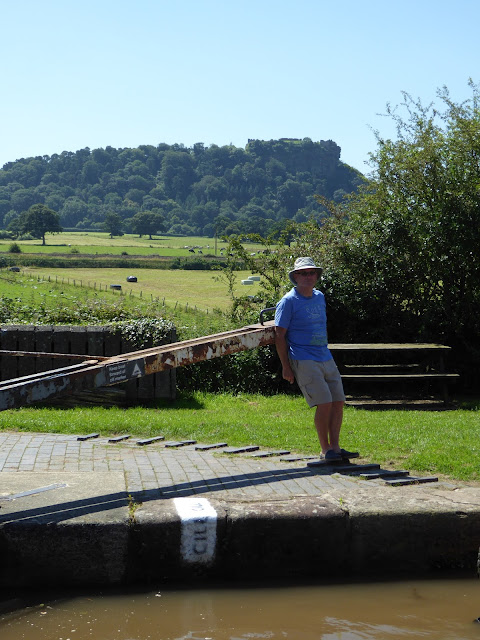 The last lock along this stretch and then we saw the pub The Shady Oak which had been highly recommended by a passing boater I had chatted to.  Most unusually for us we stopped for a beer and most of all to soak in the view.... 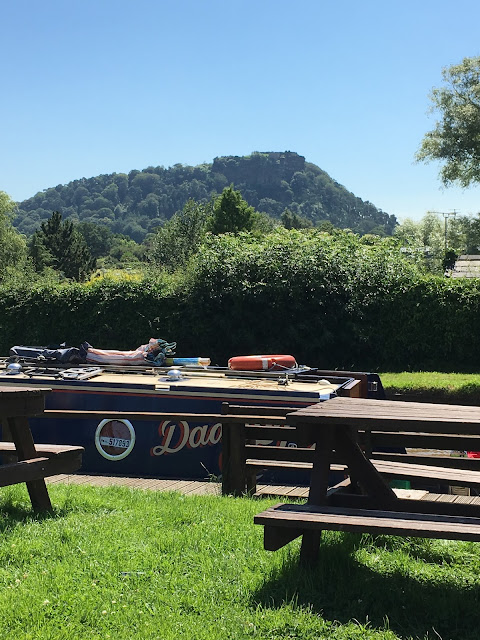 Beeston Castle.  I am told that its a terrific walk and view, another time though as we have a show to get to.

We cast off again and onto in the hopes of mooring in Waverton which was the car was waiting for me as appointed driver tonight.  Which we managed to quite nicely.

Quick shower and change boy it had been hot today, jumped into the car and off we went to Fav town of the moment Audlem.  I have come across a leaflet on WaL that I and picked up weeks before when we were first in the Shroppie Fly about "Idle Women" a one lady play about the women working in WW2 on the canals, also poems and songs.  We had thought we would be at home for the performances, but here we were and it was on David's birthday too.

It was a grand evening and we sat outside the Shroppie Fly on a fabulous summers evening, can't say that too often about the UK can you?

The show starred Kate Saffin who had written and performed the play "Isobel's War" and Heather Wastie who had devised and performed Idle Women and Judies.

It was a terrific evening and it was the last performance of their season, you can read all about it,  HERE    I look forward to next year and would encourage others to as well.

Oooo didn't I say?  we had an early supper in The Lord Combermere.
Again.
I think its the fourth time this trip......
Posted by Lisa at 20:58