"So then punk.... do you feel lucky" almost the words of Dirty Harry

Today was a really lovely day.  You know the sort, beautiful warm sunshine, I rummaged around to pull out my shorts from the back of the trousers shelf.
Small delay in leaving due to David wanting to wash his bike NOW, and me looking for a shop that sold loo rolls NOW!!!

But then we pushed off with Fine Company of Leon's folks who live in Worcester city centre.  The first lock was a pretty deep lock that brought you up alongside the Commandery Museum,    HERE    on this trip we didn't get a chance to visit it but we will next time.

So up through the attractive city we went and soon were out into the countryside with a flight to do which were easy and pretty.

Without getting remotely technical I rather liked the paddles along here, its a bit like the workings being inside out and watching the cogs turn as you wind them. 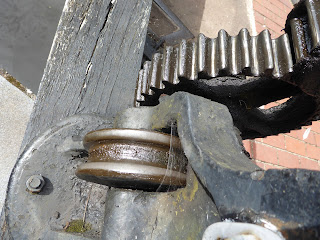 We finished for the day and moored up at Tibberton, there are two pubs here but we didn't visit either.   With our guests Nick Lynda and Stanley the super cute dog, had a buffet lunch, many a beer, later with afternoon tea, there were scones with jam and cream.

The next day was equally lovely, sun hats and suncream were deployed.

Leon's mum arrived today, we were headed for The Droitwich Canal great excitement.


So we were looking for the junction of the Birmingham to Worcester canal and the fairly recently restored Droitwich canal then it was suddenly there with a really sharp kinda hairpin turn to the left.  After a three point turn we were in.  Almost immediately there are the locks, staircase locks with side pounds that you wind up away form the lock itself.  Frightfully good thing the volunteers were there or I might still be there winding up and down.

Its an odd thing here.  When the canal was restored there was little money and according to the nice Lockkie here the dratted conservationists got the upper hand in that the moorings are sparse, the reed beds are many but the worst thing is that while the canal was disused, the M5 was built slap bang over it with a low bridge,  no money to put and extra lock in to take you under so now the boats have to perform a Limbo Dance to get under.....

We said we were going down the canal (Not everyone does as there is a marina down there too), asking if they thought we would get under....  "You should do....."  was many an answer we got from all whom we had asked recently, a ringing endorsement! 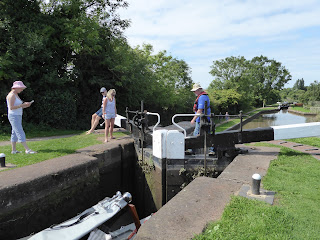 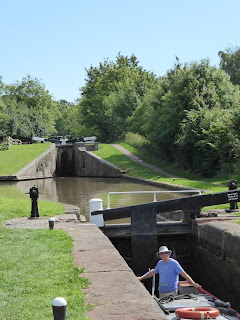 So here we are.  Leon had unscrewed our horn which stands proud of the cratch, the chimney was removed too and confidence was medium by now.....
The warning bar came into view, this is an aid to the height of the bridge.  The Lockkie had advised to leave a crew member at the last lock to stop any boats following us emptying out a whole lock of water that might create a mini surge whilst we are in the tunnel and push WaL onto the tunnel roof.


So as you may know my husband likes a gamble, its paid off in the past, but even he wouldn't take the chance and I certainly wouldn't as I reminded him, my half of WaL wasn't risking it.
So Reader..... would you have done?

We were all very disappointed, felt a bit flat, but plan B was to retrace our steps.  David reversed into the last empty lock and we went up the lock backwards.
As if to rub salt into the wounds in the very deep lock, I don't know how I did, I've never done it before but, I shut the gate too early and broke clean off the back pixie seat that Dearest David Lewis had lovingly only recently rubbed down and varnished for me..... I'm such an idiot.  David kept banging on about how he couldn't he didn't get the blame......


So after turning WaL around face the right way, we went back up through the locks and back down to the lovely mooring at Oddington where we had past this am.

Had Lunchy dinner and chilled in the sun.  It was Fliss & Leon's last day so later we took them and Leon's mum back to their cars.

At least the weather made up for it.
Posted by Lisa at 16:36