It's that man again

Here we are again Reader, didn't that ten days go past quickly?  We had spent the weekend in London with a daughter, we went shopping together while David and another daughter went to Lords.  This is a snap I took from The Triangle in Crystal Palace.  For any non Londoners among you, CP is on a hill, and this is the view of the city centre from there, it fuzzy but you can make out The Shard and The Walkie Talkie, The Gerkin is not quite so clear.  The Americans have The Empire State and we have a vegetable.  David awake at 5am this morning with a jolt.... did he switch a switch on the engine charger plug-in thingy.......?

If not the bloody thing won't start, which is actually where this blog started back in April 14   HERE

David was quite correct too, he hadn't and the boat didn't start. Dogs, new tricks and old spring to mind. 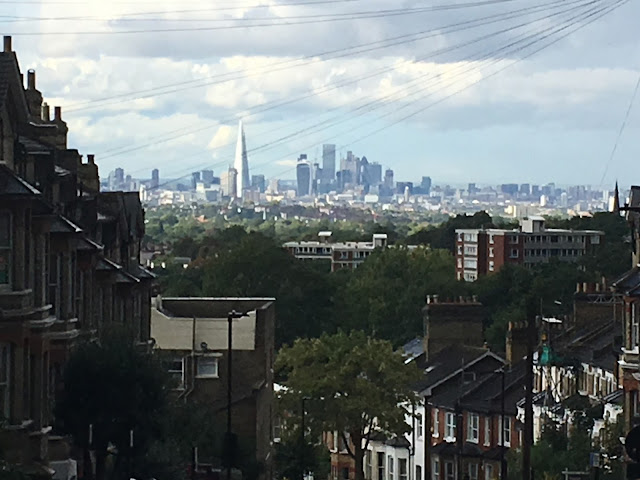 We arrived back at Kings Orchard Marina, I can recommend this modern marina, very friendly and helpful people, I didn't see the showers etc but I expect they are lovely too.  The nice people sent a man around, who arrived earlier back earlier than expected too.
Bish Bosh Bash it was going, the heating went straight on and after David had loaded up the fridge, (Reader there are benefits of being married to an insomniac, he was at Sainsburys food shopping at 7am).
I am not allowed to stock the fridge anymore, since he "Semi-Retired" that is, I was unchallenged in the fridge department for approx 25 years, but not now, I have willingly gifted him that task.

That evening we jumped back in the car and nipped over to The Ashby canal, to see friends John & Louise from
NB Ploddin' Along   HERE  they had driven over to see us form their home in Derbyshire earlier in the blog when we were on the Trent and Mersey canal, we met them when about four and a half years ago, they passed us by and I yelled out that I had read his blog.....  We caught up with them later on and are now firm friends.
I am bitterly sorry that I neglected to take a photo of either of our evenings.  But I will next time.
We ate at that super place on the Ashby The Dog and Hedghog, it was very busy on a chilly September evening which is a bit of a recommendation in itself

Next mooring bright and not very early, David steered WaL carefully out of the marina in a stiffening breeze.

Now tell me someone clever who knows their water based Highway code, when pulling out of a marina blasting the horn to alert other boaters, being unsighted due to greenery, who has right of way?
This day as we crept out, but being 70ft we can't see.
We spotted two moored boats along side the immediate marina entrance on the left hand side, which is where we wanted to go,  there were also two boats coming in the same direction,  one of which could of held back but didn't, he carried on passing the moored boats, knocking one of them very gently, as we all passed each other three abreast his face was like thunder.    I am not sure what else we could have done, it was very breezy, we had hooted, but if he could see our long nose surely he could have thought its a long boat, I'll hang back here.......?

But onwards, you get a suggestion of the wind from this photo. 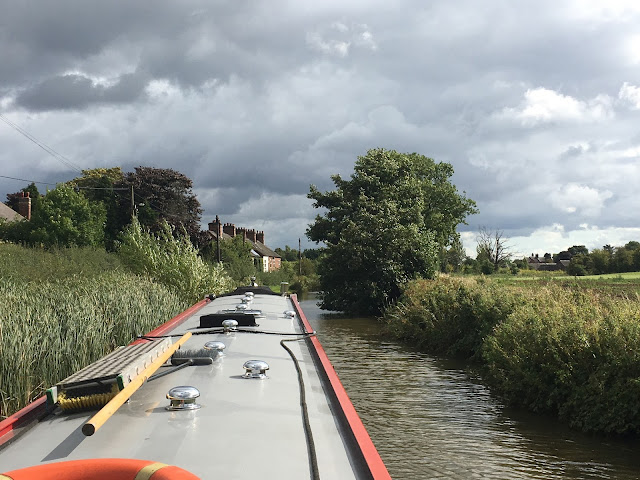 I took this shot for Carol on NB Still Rockin'   HERE  she had commented earlier that it was too cold for shorts...  but here he is in shorts, sunglasses but note with gloves on and his thickest winter lined fleece, he declares he has hot legs. 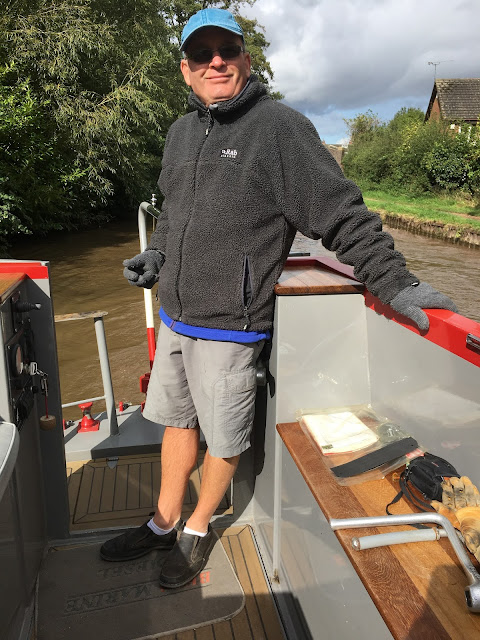 We went through the Tamworth locks and were just creeping past the moorings when a cry went up of DAVID!!!!

We both jumped a mile, it was Patsy and Tony off of NB Pedal, now remamed to NB Geriatric Express, we hadn't seen them since we came up the Caen Flight together over three years
ago  HERE

A quick calling out then on we went and moored at the foot of the Atherstone Flight, jumped in the car and raced back to Tamworth to chew the fat with good friends.

After last nights blow out and sparkle wine and nibbles with Patsy and Tony we had a light super of cheese and pickle rolls.